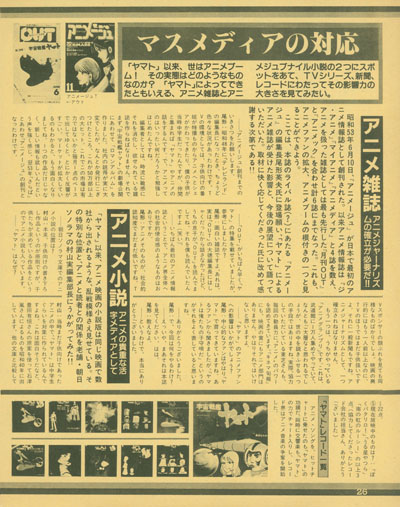 Since Yamato, the world anime boom! What is the actual reality? It can be said that Yamato‘s accomplishments include putting the spotlight on anime magazines and anime juvenile novels, and we’ll look at its influence on TV series, newspapers, and records.

It is necessary to establish
anime journalism!!

On June 10, 1978, Animage was the first anime magazine published in Japan. Since then, the number jumped to four with The Anime, My Anime, and Animedia as the leading magazines covering anime, and the number expands to six with Animec and OUT. This can be regarded as the expansion of anime fans with roots in the anime boom.

Hideo Ogata appears here, the editor-in-chief of this magazine’s rival (?), Animage. We talk about of the impact of Yamato on anime magazines and the outlook for the future. We thank him for willingly being interviewed!!

Interviewer: What were the circumstances leading up to Animage‘s launch?

Ogata: When I became the editor-in-chief of Terebiland in 1973, there were various situations. The children’s TV environment was shared by tokusatsu [live-action special effects shows] and anime. My child was a junior high student in those days, and his friends got together to talk about anime and Yamato. That’s when I began to study what exactly anime was.

As an editor, you digest modern trends with sensitivity to make a magazine that is in-demand. So I made the first Roman Album to tie in with the theatrical release of Space Battleship Yamato. It was hard to persuade the company [Tokuma Shoten], but it somehow managed to reach publication and it became a huge hit with more than 500,000 copies. I thought if we were to do something like this at the pace of once a month, the reaction would be great. If it also turned out that the market was expanding, it would become even more interesting. I felt strongly that these voices wanted new information, not just one-shots, so that’s why the first issue of Animage came out the following year along with Farewell to Yamato.

Interviewer: OUT magazine carried the first-ever Yamato feature. Did you reference it?

Ogata: That was an interesting magazine. Actually, I didn’t talk to the editor-in-chief of OUT because it would have been provocative, but my son read OUT, and I read it, too. (Laughs)

Interviewer: As the first anime informational magazine, is there anything like a social sense of duty toward the whole anime community?

Ogata: Anime itself still has a lower degree of social recognition. Even if you look at the lineup of TV sponsors, they’re all the same. Although it does well at the movie box office, on TV it is still treated like a child. It’s the same in general newspapers. That’s why anime journalism must be established.

Another thing we do is the “Anime Grand Prix.” This brings 10,000 people to the Budokan, and though it may sound like exaggeration, it is a means to preach to the world. In fact, Toshiba cooperates generously, and the mobilizing power of anime is observed each time. But there’s still no anime category in Kinejun magazine’s film awards, and I think that’s no good.

[Translator’s note: Kinejun was the go-to film magazine at the time this interview was conducted. It was also the first mainstream magazine to publish a Yamato cover story. See it here.]

Interviewer: How is the influence of Yamato on anime fans?

Ogata: The central fans grew up on Yamato. One fan told me, “Yamato is our lullaby.” I think that sums it up well.

Ogata: So, what are you doing this time?

Interviewer: Uh, please look for it in the magazine, haha.

Interviewer: That was very helpful, thank you very much. 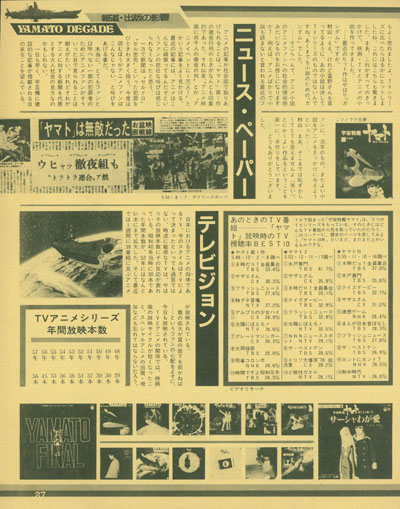 A valuable type of print media
for Anime Expo 2011

Novelizations of the Yamato anime movie were published by several companies, demonstrating a pattern of competition. We asked editorial director Minoru Murayama of the long-established Asahi Sonorama about the company’s special position and the relationship between readers and anime!!

Interviewer: What is the position of the anime novel at Asahi Sonorama?

Murayama: Although the original principle was newly-written works for children, we also do anime novels since those are the works children are asking for.

Murayama: Back when anime was still a product for children, Yamato was made for junior high school students. This looked interesting, so we published a novelization by Arashi Ishizu in 1974, using the original story draft by Aritsune Toyota [read about it here]. It sold well compared to our other lines. It was a big hit compared to the TV series, which was quite surprising. Well, this was an opportunity to do novels based on movies, TV, and anime.

Interviewer: Was the latest work Gundam a hit, too?

Murayama: Yes. However, Producer Yoshiyuki Tomino has said that the novel is not of the TV series in any way. It is a Gundam novel to the last.

Interviewer: In that area, do you feel something like a social sense of duty toward anime fans with anime novels? For example, for the fans nowadays who tell you they only watch the anime and never read novels, do you tell them you’re taking advantage of the anime to give them a good novel to read in print?

Murayama: Well, I’m embarrassed to say that I don’t go that far. (Laughs) Anyway, the first priority in making a book is that it has to be a good one.

Articles about anime appeared on the general news page when the all-night lines for the first Yamato movie proved to be so impressive. Since then, we’ve often seen articles such as “Lines of thousands stay up all night for an anime movie!” or “10,000 people attend anime event!” In recent articles, it seems that the tragic shouts from fans wishing luck to anime are no longer felt.

On the other hand, they lately deal with particular crimes such as “cel theft” and “cel trafficking.” When I read that now, I feel I have to shout that anime fans aren’t like that!

Truthfully, it is intolerable that anime fans are scrutinized this way because of criminals who can hardly be called fans. However, it may be the view of adult society that looks to newspapers for a representation of anime.

We hope that more constructive articles will be published in the arts sections of newspapers as soon as possible.

TV is the mothership of anime in Japan. It is no exaggeration to say that the present style was decided by TV. After all, TV is sensitive to current trends, and the number of programs being aired reflects that reaction. Their number was 30 in the year 1965, and expanded to a whopping 51 in 1977. Recently, 38 anime programs were aired per week.

Despite the concern of fans that an increase in number must lead to a drop in quality, they continue broadcasting today.

In the context of TV and anime, the cycle for the broadcast of a movie version has shortened, probably so that the appearance and increase of special anime is not forgotten. 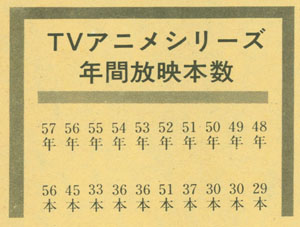 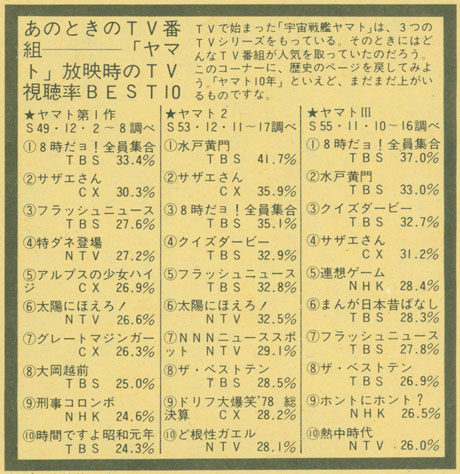 Best 10 top-rated programs at the time of Yamato broadcasts

Space Battleship Yamato began on TV and had three series. What kind of TV programs were popular then? In this corner, let’s turn the page of history. Though we’re talking about Yamato‘s 10 years, there is still more to cover.