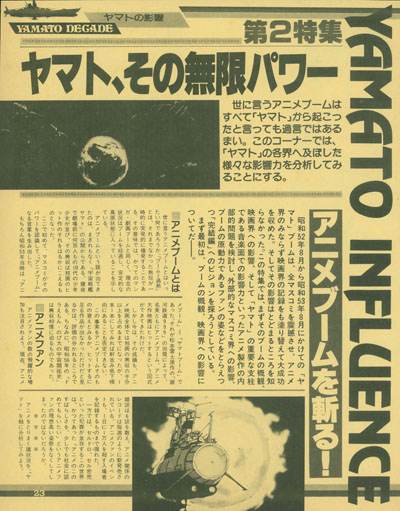 It is not an exaggeration to say the world anime boom was caused by Yamato. In this corner, we will try to analyze how Yamato influenced various fields.

Bring on the Anime boom!

The Yamato boom from August 1977 to August 1978 shook up all of mass media, shattering records not only in the anime world but also the film world, and achieving great success. Its influence knew no bounds. This feature begins with an overview of the boom and its influence on the movie world, and examines the internal issues of anime production, such as the influence of the music side, which is an important prop of Yamato. From the effects on mass media to recognizing the fans as the driving force of the boom, we’ll try to explore the vision of The Final Chapter.

First, an overview of the boom and its impact on the film world.

About the Anime boom

What exactly does the world perceive as the anime boom? If “Boom = overheating,” it is an unprecedented frenzy that explodes in a sudden, temporary burst. In that sense, like the manga and graphic novel booms of the past, the current situation has passed beyond the boom and reached a stable plateau.

The term “anime boom” unquestionably emerged from the release of Space Battleship Yamato. Hundreds of teenage boys and girls stood in line outside theaters all night. The box office proceeds far surpassed that of a hit Japanese movie. Mass media recognized its power for the first time then, and created the term “anime boom.”

Of course, “anime boom” meant “Yamato boom” in 1978. It was the appearance of Leiji Matsumoto’s original Galaxy Express 999 as an epic hit anime movie that translated it into a true anime boom both in name and reality. However, although anime movies came to occupy more than half of Japanese film distribution, it cannot be denied that these days there is a downward trend across the board.

Whether this fact represents a decline of the anime boom, or it simply means not enough works became hits, it is a place where opinions are divided. By the way, The 1981 Doreamon movie Nobita’s Space Story earned close to 4 billion yen at the box office.

There has been a dramatic increase in the number of anime fans, which also attracts attention. There are currently six anime magazines, and anime-related records are released almost every week. Events for anime fans record attendance of over 10,000 people a day. On the other hand, this world which coexists with such crimes as cel theft and cel trafficking has lost the high ideals of anime fans who “want society to recognize the wonder of anime, even a little.”

Let’s analyze the situations that surround anime, centering on Yamato. 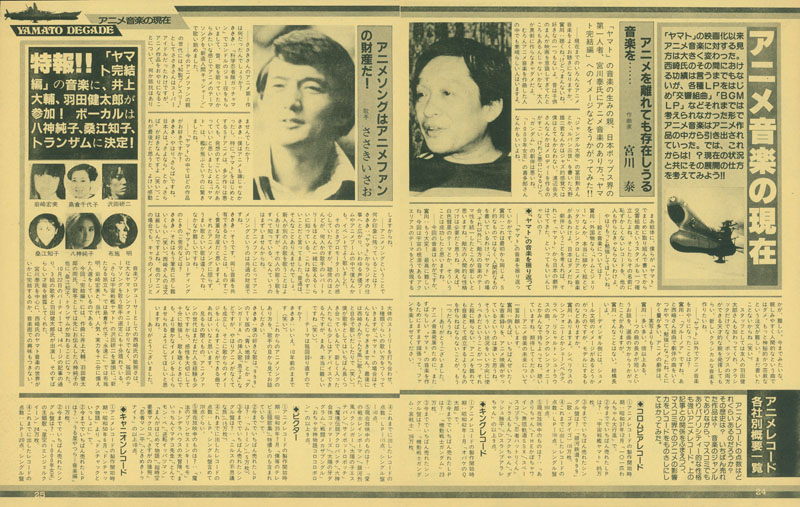 The perception of anime music has changed greatly since the film adaptation of Yamato. It goes without saying that various LPs such as the Symphonic Suite and BGM albums drew anime music out of anime works in a form that was not previously considered. So, from here!? We’ll consider the current situation and further developments! 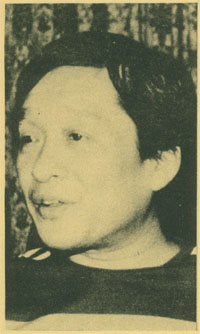 Music that can stand on its own apart from anime…

From the creator of Yamato‘s music and the guru of the Japanese Pops community, we listen to Hiroshi Miyagawa’s philosophy of anime music and hear about the image of The Final Chapter!!

Interviewer: Do you often listen to various anime music to date?

Miyagawa: I listen to it. But it’s boring. I can’t find a favorite. There’s no place where it isn’t overly conscious of being a child’s manga movie of the old days. Adults just can’t take it seriously.

Of course, there are great people who have composed anime music. There’s Isao Tomita’s Jungle Emperor [Kimba the White Lion], and I can’t hold a candle to the jazz style Yuji Ohno wrote for Lupin III, and Takeo Watanabe makes some great melodies. But the score for Gundam is awful, even though I’m bad-mouthing it. Kitaro’s Queen Millennia is good, too.

Overall, for Yamato there is a style called Symphonic Suite that I worked hard to tackle. That’s a record that isn’t ashamed of its name, and other people should make them, too. I want them to work harder.

Interviewer: What about pictures and music?

Miyagawa: In terms of foreign material, there’s Tom & Jerry, an anime in which the music and picture are finely synchronized. Japan is not good at that. Considering musical scores, perhaps we could say that, to an extent, Japanese musical scores came from Yamato.

Looking back at the music of Yamato

Interviewer: How do you look back at the music of Yamato?

Miyagawa: It’s been the same from the beginning. Rather than an SF thing, I wrote a human thing. Other than that, in the case of Yamato I think the part where we have a unified theme for the enemy music is new. I think that if the enemy side is human, it’s necessary for them to have a personality. For example, I think the Comet Empire theme was successful.

Interviewer: How is the music this time?

Miyagawa: Very hard! It is the most difficult. Deciding how to express the Aquarius theme as the origin of the universe is difficult this time. Friendly, humane music like what came before is no use. The order for something more solemn and mystical is difficult. Because I haven’t written it before. (Laughs)

Kentaro Haneda has joined the staff, so we can demonstrate both genius branches of classical and pops. I want to make new classical music.

Interviewer: Have you done any anime music besides Yamato?

Miyagawa: It was Blue Noah. I worked on some of the score through Mr. Nishizaki, and it became a study. Anyway, anime needs a lot of musical accompaniment.

Interviewer: I’ve heard from a music editor that the length of a single track is short.

Miyagawa: Not at all. They are quite long.

Interviewer: I heard that the Dengil side has the image of the Sumerian civilization. Is there a model for you to use?

Miyagawa: There is. Symphonies by Sibelius and Schenberg, Ravel, music by Richard Strauss, and Franck. I’m listening to them all. Please look forward to it.

Interviewer: Please give me a word about the future of anime music.

Miyagawa: For example, in terms of lavish music recording, I think anime movies are doing great. Such a good situation should be used in a good direction. Don’t just depend on the images. Anime may be hard to make, but you need to consider the music on its own terms.

Interviewer: Thank you very much. Please continue to do your best for anime music development and work hard to make wonderful Yamato music for the fans to enjoy. 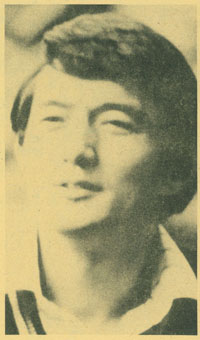 Anime Songs are the property of anime fans!

Interviewer: What was your first anime work?

Sasaki: I got the part of Joe the Condor in Science Ninja Team Gatchaman a long time ago. Because I’m a singer, I liked anime theme songs, and started singing them in Neo-Human Casshan.

Interviewer: To the parents of present-day anime fans, you were known as the “Japanese Elvis.” As a super-idol, was there any resistance to you doing anime works?

Sasaki: As for me, I never disliked anime, and I particularly like SF anime, including Yamato. Even if it wasn’t well-made, I thought it could still have good ideas. The surprise of Yamato was a flying warship.

Sasaki: In the end, it’s Farewell to Yamato. A Japanese person likes “Goodbye” and “Farewell.” (Laughs) I was especially impressed by thinking of it as the end.

Interviewer: Do anime songs leave you with any sort of impression?

Sasaki: The work of Yamato was spread through radio, and I often sang songs for events in the so-called anime boom and voice actor boom.

I admired the promoters then, but the fact that most of the audience was able to sing most of the repertoire together with the singers…I thought this was something great. Such a thing isn’t usually possible. A newcomer can usually sing someone’s song, but it’s very unusual to know all the songs that a person sings.

Interviewer: Anime songs are the common property of anime fans.

Sasaki: That’s right. The ability to share the same music is a tremendously precious thing. To sing a good song, not just anime songs but good songs in general, is rather difficult.

Interviewer: Was it difficult at the time of recording Yamato?

Sasaki: It’s hard to put into words. (Laughs) Mr. Nishizaki’s orders were tough. In the case of other anime, I do about three kinds of singing based on the image of the character and story, but in the case of Yamato this didn’t work. In the end, Mr. Nishizaki told me, “Sing it this way,” and then started singing it himself. (Laughs)

Although I’ve worked as a singer for a long time, I can only give a little advice to people who are new to it, and that is that it’s really hard. (Laughs)

Interviewer: Do you re-record the theme each time?

Sasaki: No. It’s still in the state it was ten years ago. (Laughs)

Interviewer: Judging from the eyes of a singer, please tell us how you see anime songs in the future.

Sasaki: My favorites are insert songs like The Blue Earth in the TV version of Galaxy Express 999, and A Son in Danguard Ace, which materialized separately from the anime. I hope that it’s possible to expand image songs from there.

[Translator’s note: An “image song” is used within the body of a film or TV episode, separate from the opening and closing themes.]

Since the anime fan generation still has fewer life experiences, if you listen to the song and study enough to value its sensitivity, I think it will enable you to grow and be enriched.

Daisuke Inoue and Kentaro Haneda participate in the music of The Final Chapter! Vocals will be provided by Junko Yagami, Tomoko Kuwae, and Tranzam!

The capability of Mr. Nishizaki as a music producer appears not only through the magnificent Yamato symphony, but also his choice of singers for the theme songs every time. From Kenji Sawada in Farewell to Chiyoko Shimakura in The New Voyage, to Akira Fuse and Hiromi Iwasake in Be Forever, contemporary artists of great ability and popularity are selected.

This time, for The Final Chapter, Daisuke Inoue and Kentaro Haneda participate as composers, and Tomoko Kuwae and Tranzam will join the previously-announced Junko Yagami as singers.

At the October 22 party described on page 14, Kentaro Haneda and three sets of singers appeared to show off their wonderful talent.

Lead by Hiroshi Miyagawa, how will Mr. Nishizaki’s world of Yamato music conclude? Interest in the music side is inexhaustible.

TEXT AT BOTTOM OF PAGE SPREAD

Do you wonder how many anime records there are? The history? The best-selling work? While it is a musical genre, anime records are also a strong means of mass-media publicity. Based on the relationships in the articles above, we’ve tried to measure the influence of anime records on the mass-media world.

3. Best-selling single so far: The Wonderful Adventures of Nils, 150,000 copies

4. Number of records released so far: About 200 LPs and singles

(Thank you very much to those at the record companies who worked with us.)

FROM THE NEXT PAGE SPREAD

The distinguished services of Yamato also put anime songs on the hit charts. Symphonic music also entered the charts simultaneously through the power of Yamato. The record industry began an anime music competition.

Continue to the next part: Mass Media