Here, we continue our look back at how Final Yamato coverage in Japan progressed month by month up to the premiere in March 1983. For full context on what the anime industry looked like that summer, back up to the June ’82 Time Machine here. New developments since then were as follows:

July 3: the premiere of Space Adventure Cobra in movie theaters.

July 6: the debut of a 39-episode mecha-action TV series titled Galactic Gale Baxinger, part of a trilogy called the J9 series (with Braiger and Sasuraiger). See the opening title here.

July 10: the theatrical premiere of the Legendary Giant Ideon double-feature: A Contact and Be Invoked. Together, they retold the story of the Ideon TV series and expanded on its ending.

Soon to come was Leiji Matsumoto’s Captain Harlock movie, My Youth in Arcadia. Here’s how the July magazines (which all carried August cover dates) responded… 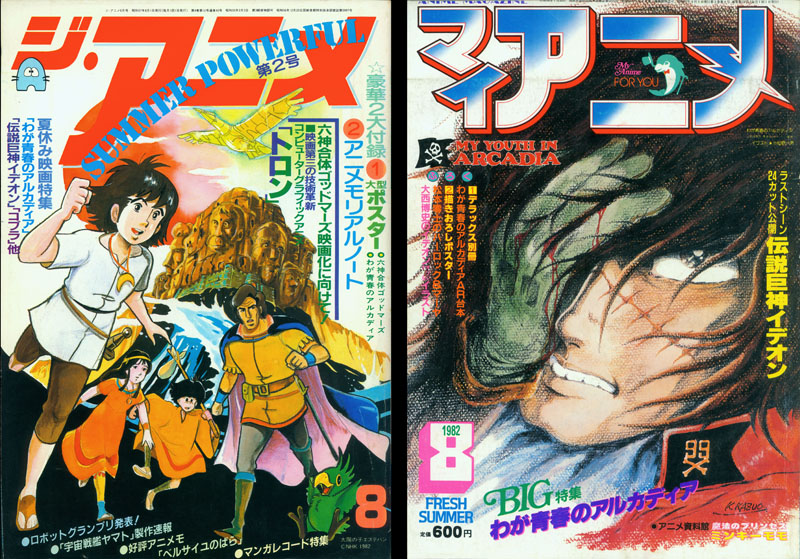 The Anime opened with an 8-page insert covering the visual wonders of a Disney movie called TRON that had just been released in America (that very day, in fact) and opened the window on the brave new world of CG. The summer movies got up-front attention, followed by various articles on TV shows past and present (despite appearing on the cover, Esteban was absent from the interior). Another unusual piece was an article on Russian animation.

Rather than speculate on what Final Yamato had in store, the editors turned things over to Yoshinobu Nishizaki himself to write a series of essays, which began with this issue. It featured the latest design work and one unexplained Yamato III image that never appeared again.

The lead-in for this issue was a 24-page mini-magazine on the making of My Youth in Arcadia with extensive text features (Akita Shoten was preparing a book on the film, so they must have had plenty of info at hand), and heavy-duty coverage for Ideon and Cobra. A roundup of articles about new and upcoming TV anime included a 2-page spread on Macross with a Minmay pinup and what must have been the first character profiles anywhere. Another surprise was the first look at character designs for Crusher Joe, which would premiere the same month as Final Yamato.

The Yamato article focused on the new enemy Dengil with lots of speculation about the movie that later turned out to be pretty accurate. 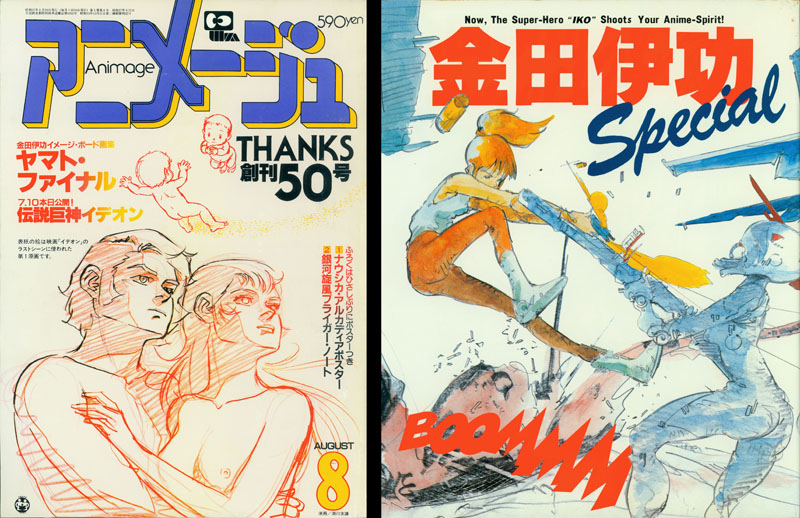 Animage covered all the same titles as its competitors, but with typically bigger and flashier layouts, since they had the most creative graphic designers in the business. Their Final Yamato content was very different; an 8-page insert focused entirely on the concept illustrations of Yoshinori Kanada, with comments from both the artist and Yoshinobu Nishizaki.

The special feature in Animage was a direct tie-in to this product, which was the first book with Final Yamato content. It wasn’t extensive; just six pages out of 112, all containing the same art that was showcased in the magazine, and no pertinent text. But what made this special special was its huge collection of Kanada art, never before assembled in print.

The first part of the book, titled “New Sketch Gallery,” was a gathering of concept sketches that practically leap off the page with energy and dynamism (Final Yamato among them). Sections titled “That’s IKO anime” and “Original Picture Album” were devoted to Kanada’s TV works with stills and key frames, and the last segment was a retrospective of his amateur days titled “Visual Youth Diary.”

Though Mr. Kanada died in 2009, he is revered as a true pioneer who discovered the true power of the medium and contributed mightily to its worldwide popularity.

Click here to continue to the August ’82 Time Machine: Yamato goes on the road with the fan gatherings, dreams of 70mm, Animedia gets into the game, and Animage loves Yamato long time.