The production of Space Battleship Yamato The Final Chapter has started in earnest. This is a special serialized feature we’ll be running until the movie’s premiere, which talks about Yamato from the standpoint of Yoshinobu Nishizaki, who brought up Yamato as the producer and continued it for ten years. This month is the introduction. 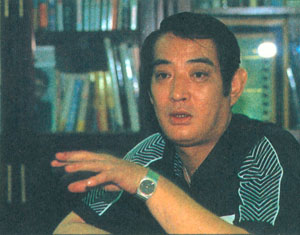 I would like to attach an ending to the work.

Because I started planning Yamato in 1973, it will be exactly ten years next year. So by creating a fourth theatrical film for that tenth anniversary, I am calling it the final chapter of the series. I want to give closure to the series in The Final Chapter and, for myself, fulfill my responsibilities as a producer.

Speaking of the features of The Final Chapter, it is not being passed out to the staff according to each speciality. For example, an art director conventionally looks after revisions, but this time I’m having him participate from the storyboard stage. By doing so, I think he’ll be able to demonstrate his full creativity in the production. Also, if we see an angle that we’ve used in previous works, I’m asking the art director to draw it from a different angle now.

Naturally, we’ll have to have spectacle scenes. For that reason, we’re designing them before the storyboards. We plan to finish drawing the spectacle scenes in July or August. Of course, because each person has their own style of drawing, it’s divided up between human drama, mecha, and scenes of women. Anyway, I’m thinking I want the animation director to draw pictures for The Final Chapter to his heart’s content. In short, the animation director has come to be in the production portion. In cases where the art precedes the script, it can get a bit nerve-wracking, but this is not the first time. 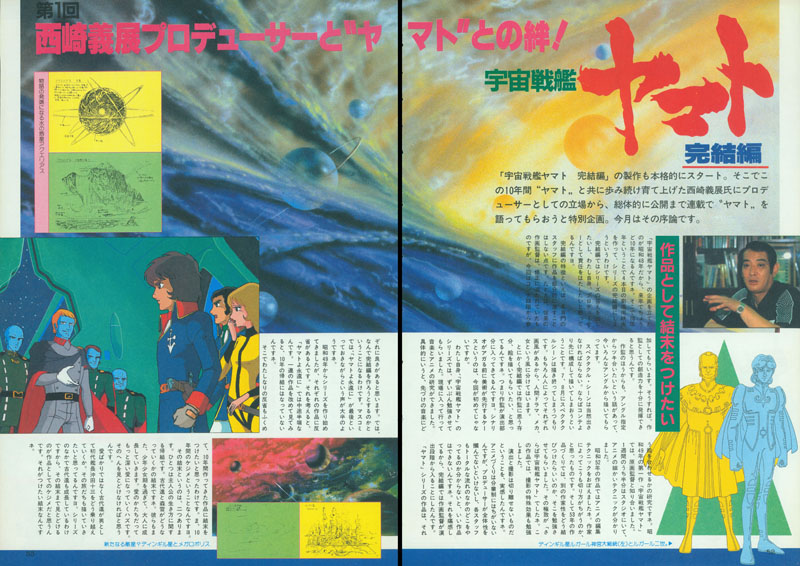 As for me, I learned a lot on the Space Battleship Yamato series. I was able to study anime and music performed on the spot. To be more specific, I studied how music and pictures can be combined. On the first Yamato in 1974, I became acquainted with the director. I spent half the week in the studio and understood the fine technique of anime.

I learned the valuable technique of editing anime in the 1977 film. My thoughts about how to cut it were different from those of a writer. And by making the film of 1978, I studied how to combine the work of different writers. That had great value for Farewell to Yamato. With that work, I also studied special effects photography.

I came to realize that directing and photography were inseparable. Although there are different parts to making anime, there is no division of labor, and a producer must be aware of the totality. If I don’t know about the total flow of each staff member, good work cannot be done. Because I am keenly aware of this, I decided to bring in the animation director during the production stage of The Final Chapter. 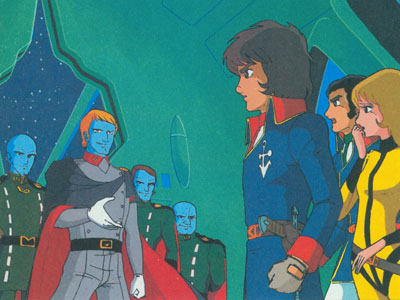 The mystery image: a scene from Yamato III not seen in the
anime. Based on the style and composition, this was probably
created for a children’s book that didn’t get published.

I think each work in the Yamato series has its good points. It is expected that some will ask why we are making a conclusion. It seems that the majority of voices in the media were calling Be Forever Yamato the end.

Although we started making the series in 1974, there is a reflection of it in each of the works. When you consider that, it is only half-done in Be Forever. If you look at the whole series anew, it does not come to a ten-year conclusion. I reflected upon this myself, and this is why I wanted to create an ending for the work I’ve been making for ten years. Well, this is the difference ten years makes.

The ending has two parts. One consequence is about the life of the main characters. That is, what happens to Susumu Kodai and Yuki Mori in the end. They are past the period of adolescence and they mature into adults. Their love should become deeper and more profound. I think I need to portray that.

But it is not only love, it is also how Susumu Kodai will surpass Juuzo Okita as a man. I would also like to depict that journey. Because Kodai has grown throughout the series, I think that is a distinction that must be seen at the end. That’s the ending I want to give it. 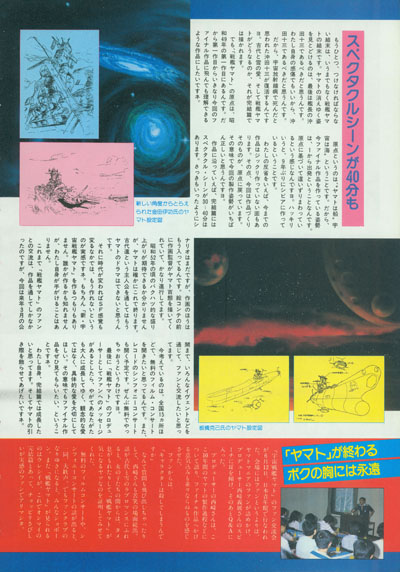 Needless to say, another of the conclusions that must be named is the end of Yamato itself. It is confirmed that Yamato will vanish, so I think the last captain should be Juuzo Okita. Even if it’s my own sentimental though, it is Juuzo Okita. Therefore, Juuzo Okita, who was thought to have died from space radiation sickness, will be resurrected. What happens to the love of Kodai and Yuki and Yamato will be depicted in The Final Chapter.

The starting point is that “Yamato is a ship” and “space is an ocean.” So the attitude for making the final work begins there. Based on that starting point, there’s a feeling of it creeping around.

To put it bluntly, you could say I’ve been rigorously making this for nine years. Speaking in terms of my own meditations on the subject, there are aspects of the productions I’ve made up until now that weren’t done very carefully. In that respect, this production returns to the starting point this time. Therefore, I think this is the appropriate attitude for this production.

Speaking of the work, there is a 30-40 minute spectacle scene in The Final Chapter. As I said, the script is still not finished, but the drawing has already begun. An art director has drawn various phases of Yamato prior to the storyboarding, and there has been considerable progress.

I don’t know whether you can expect an explosive upsurge like the days of 1977, but Yamato surely ends with this. I don’t think the story of Yamato can go on any more through the main character of Susumu Kodai.

As times change, the sensibility of SF changes, and it is my feeling that I cannot make it any more. Of course, I do not intend to create a new Space Battleship Yamato. Someone else may make it, but I would not be involved myself.

Until now, my exchanges with fans of the past Yamato were only through the work itself, but between now and the premiere next March, I want to interact with fans through various events. Right now, I’m thinking that I want to open a free film concert in about 15 locations across the country. [Translator’s note: “film concert” refers to a marathon screening.] We will also open a symphony concert of record. I want to offer it all for free.

Finally, if the producer of Yamato has a message for the fans, it is that rather than ideological love, I want to you to value concrete love as you grow up to be adults. By all means, I want you to watch the final work in that sense.

I myself want to grow up with The Final Chapter. And when Yamato goes off, I want to honor it.