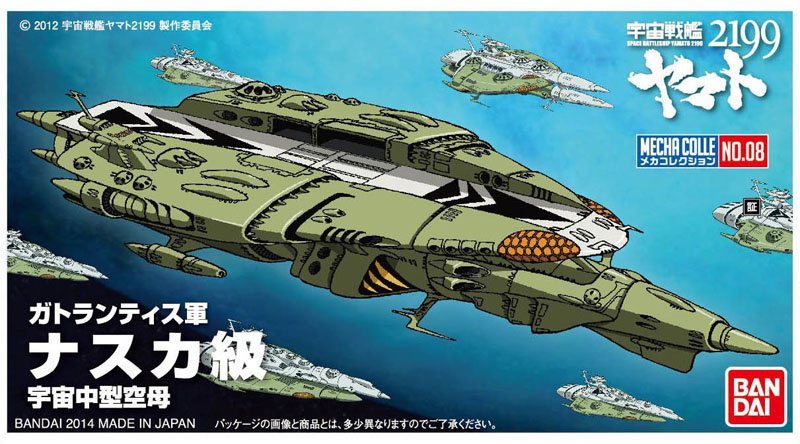 The third ship in the Gatlantis fleet mini-model lineup is the Nazca class mid-size space carrier, based on the ship of the same name from the original series. Measuring about 4.75″ long when finished, it is the third and last Gatlantis ship seen in the series. So far. 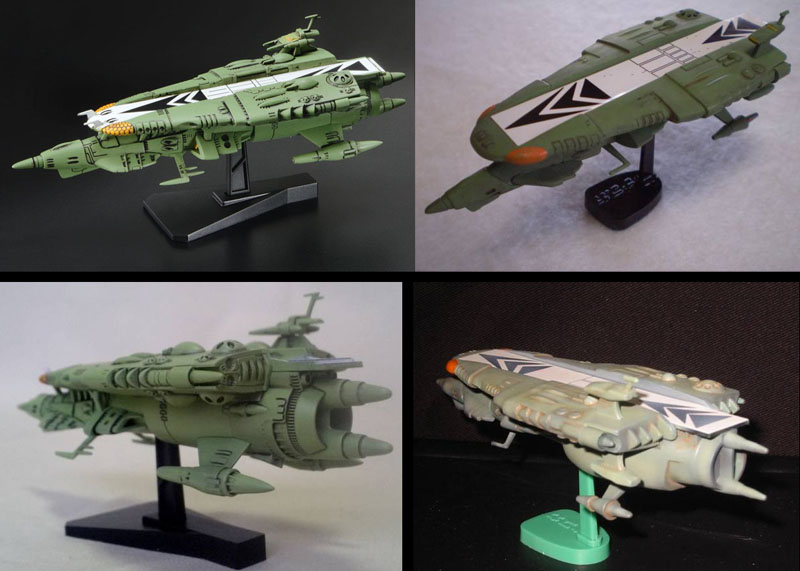 The new kit is shown above left with its predecessor to the right, which also happened to be #8 in the original Mecha Collection lineup. COINCIDENCE??

Other fortunes seem to have followed this particular ship, since it was the only Gatlantis model to be released by Nomura and is scheduled for a larger-scale release very soon.

The first big hobby show of the fall season had several surprises in store for Yamato fans who studied the displays by Bandai and Megahouse. The 1/100 Yamato topped Bandai’s Yamato section, which showed off the prototype of a never-before-seen 1/1000 Nazca, to be released in late December.

Sitting nearby were Mecha Collections kits 9 and 12, Cosmo Zero and Cosmo Falcon, to be released October and December respectively. (10 and 11 will be Kirishima and Domelaze III, coming in October and November.)

Megahouse had two surprises: the announcement of a 1/8 Yurisha Iscandar for the Yamato Girls Figure Collection (to be released spring 2015) and a commitment to release the “warp style” Cosmo Fleet Yamato miniature at an undisclosed date.

See an extensive photo gallery of both product displays here.

It comes equipped with a Gallunt drill missile bomber and a separate missile that fits right inside Yamato‘s Wave-Motion muzzle. Also included are two decks, flat and armed, and an optional rear turret.

The ship is shown above at actual size, 6.3″ long.

Bet you weren’t expecting this. Right in the middle of this Yamato maelstrom in Japan came an echo in America never quite heard before.

The Georgia-based convention Anime Weekend Atlanta hit its 20th year in September. Music acts from Japan have long been a staple of AWA, and this year they stepped it up a notch with famed girl rockers Shonen Knife and the legendary anime theme singer MiQ (formerly known as Mio). MiQ’s opening act was a group of her students named VLOMiQ (VLO stands for Voice Lesson Office) and they performed an energetic grab-bag of anime favorites. 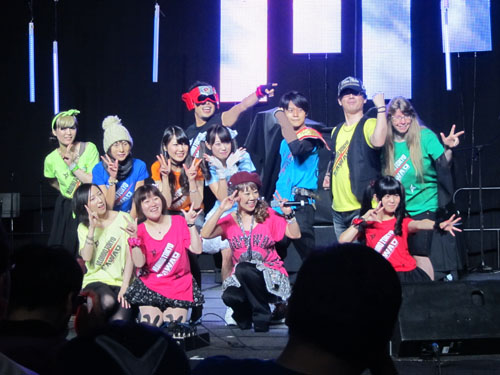 The Yamato theme is a common show-closer at Japanese anison [anime song] concerts, and VLOMiQ upheld that tradition with their own rendition of both verses. MiQ strolled onto stage to follow up with a scat rendering of I Remember You from Farewell to Yamato, which is so rare in the anison world as to be an exclusive.

See more of his clips and photos from MiQ’s hour-long concert here.

The next evening, AWA20 closed with a groundbreaking orchestral concert dedicated to anime and game music. Performed by the Georgia Philharmonic, Fandom Fanfare consisted of such titles as Fullmetal Alchemist, Howl’s Moving Castle, Halo and Kingdom Hearts – and a 2199 composition of the Space Battleship Yamato theme.

The appreciative audience rewarded their efforts with oohs, ahhs, and generous applause, prompting the conductor to remark that it was the most enthusiastic crowd they’d ever played for.

See their performance of the Yamato theme here.

Two weeks later, the Georgia Phil opened their season with the same set list, augmented by popular American fantasy and SF compositions. After previous performances in 2008 and 2010, this marks only the fourth confirmed time the Yamato theme has been played live in the US. It was the first time for this specific arrangement. Hopefully the first of many.

Radio Intelligence Agency is a biweekly news program covering the anime and game worlds on the Nico Nico Live internet streaming service in Japan. They made waves on September 28 by teaming up with Lawson (a convenience store chain) to produce this live stage show with music and talk sessions at Ebisu Garden Hall in Meguro, Tokyo.

Macross Frontier songstress May’n was the headliner at the top of the program, which ran for the full afternoon from 1pm to 8pm. A Yamato 2199 talk show took over for about 40 minutes later in the day, featuring Producer Mikio Gunji and voice actresses Aya Uchida (Yuria Misaki) and Eriko Nakamura (Mikage Kiryu).

They showed Yamato 2199 in 3 Minutes along with the latest trailers and shared other movie news during their presentation. One but of exclusive news was that manga artist Michio Murakawa had created nine new illustrations to accompany the end credits of A Voyage to Remember, two of which were shown for the first time.

Mikio Gunji surprised the MC by announcing that Murakawa was present in the audience, but is notoriously camera-shy. Regarding Ark of the Stars, Gunji said the staff was still hard at work on the film, which depicts Yamato facing a strong enemy in a completely new story. “And I want to strongly kick their ass,” Nakamura countered.

Nakamura also explained that Kiryu Mikage is a student of linguistics, and closely studies alien languages. She owned the stage and won the audience in a moment of role-playing where “Kiryu” coaxed the camera in close enough to plant a wet one.

The day after Mikio Gunji broke the story at AniLawson, Yamato Crew published the two end-credit images by Michio Murakawa, which depict the characters in thoughtful scenes (similar in tone to end-credit images created for the first Yamato Playstation game in 1998). Seven more such images will appear in the film.

The following statement by Murakawa accompanied the art:

About the ending illustrations –

Although there are characters in Yamato 2199 that do not appear in the original work, I feel that they have already breathed a solid presence into the eyes of those who watch them. I have such thoughts as, “He would do it this way,” or “She would surely be like this.” In my illustration meeting with Director Kato, I noticed that he also very much had that feeling. The illustrations do not move, and neither do they speak. But there is room for the imagination. I drew these pictures with a feeling that it would become a small opportunity to remember the people of Yamato.

See the entire end credits sequence for A Voyage to Remember here. 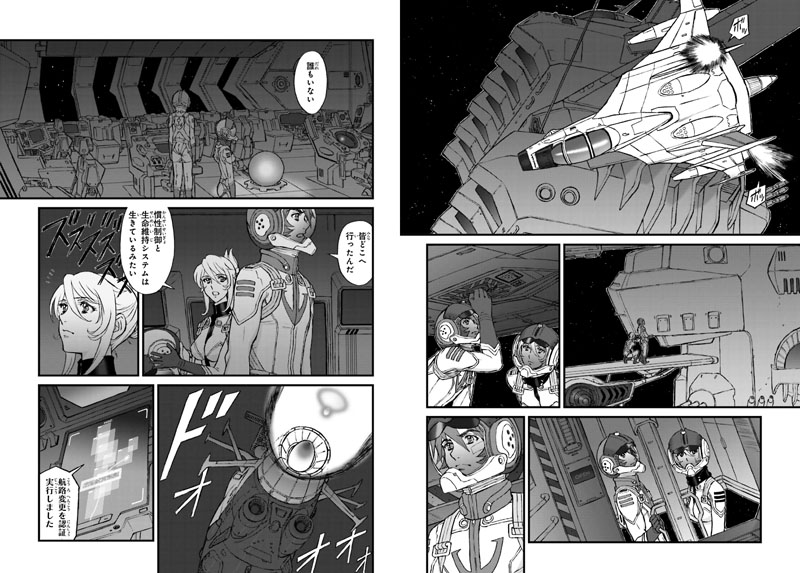 The spotlight remained on Mr. Murakawa the next day when he closed out the month with the latest 2199 manga installment on the Nico Nico Ace and Comic Walker websites. With this, he begins his adaptation of Episode 14, The Witch Whispers. 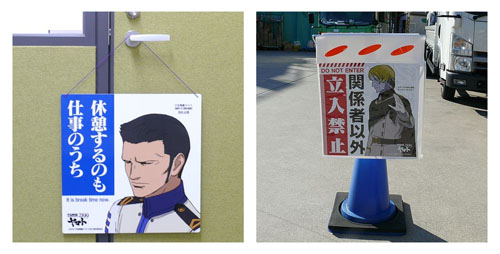 First, a followup on some previous business. In 2012, the Fantasy Division of Maeda Construction Co. (yes, there really is such a thing) wrote a prospectus on what it would actually take to build and launch Yamato. (See it all translated here.)

Meanwhile, Yamato-themed safety signs were adopted by the company and posted at actual construction sites in Japan. 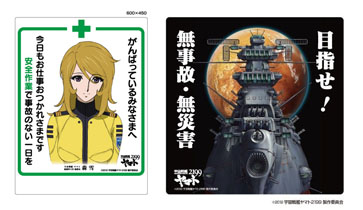 The online store at the Yamato Crew website began selling these signs to fans in August 2013, with an average size of about 17″ x 23.” Only two of them were initially offered, but the full set has appeared recently at another website. They read as follows:

Above, left to right: 1. (Okita) Wear full protective equipment!! • 2. (Sanada) Taking breaks is part of your work • 3. (Kodai) Use caution after this entry • 4. (Kodai and Shima) Everyone strive for zero accidents!

Above, left to right: 1. (Dessler) Off limits to unauthorized personnel • 2. (Harada) Do not place objects here • 3. (Yuki) Recent incidents make this a hazardous area • 4. (Yuki) People are waiting for your return 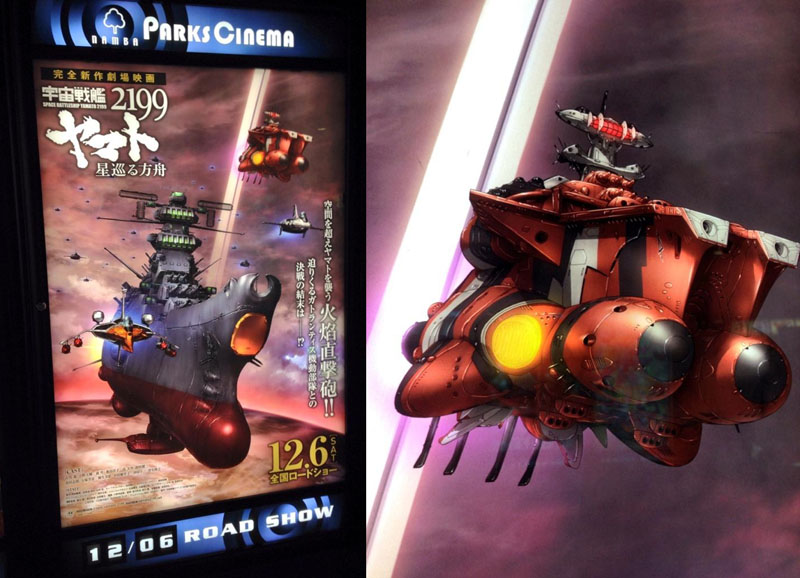 Ark of the Stars movie poster

The #Yamato2199 Twitter page is always full of interesting odds and ends. Example: these photos posted September 1 of a poster at an Osaka theater, which includes a great closeup of the new Garmillas battle carrier.

Above left: On September 3, a 10th-anniversary best-of album by Aki Misato titled Gift was released by Lantis music. The 2-disc set includes You Who Know the Beautiful Earth, the end title song from 2199 Chapter 2.

Above right: An ad spotted on an Osaka train for an October 13 “Brass Jamboree” concert featuring Yamato music. Because it is inescapable. 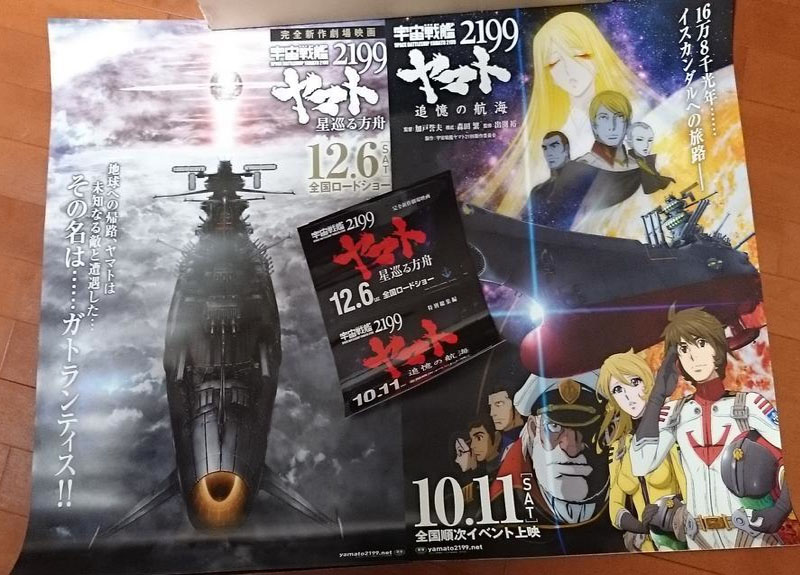 In an echo of the guerilla marketing that got the first Yamato movie into the public eye back in 1977, Yamato Crew made this set of promotional posters and stickers available to fans for merely the price of postage. They also encouraged everyone to send in “cheerleading” photos for publication in the next issue of Ship’s Log.

The set consists of three of each item: three Voyage to Remember posters, three Ark of the Stars posters, and three large-format (about 8″ x 12″) sticker sheets with a sticker for each film. More proof that if you keep the fans happy, they’ll be your most powerful ally. 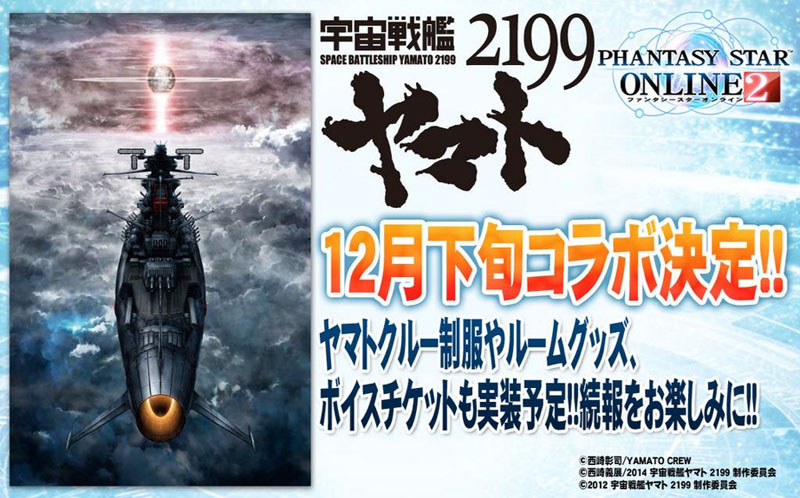 PSO2 is a popular multiplayer RPG game released by Sega, and it was announced in early September that a Yamato 2199 collaboration would go into action late December, which most likely means Yamato-derived elements such as costumes and props could appear in the game. More news as it happens.

One of the many public events described in Report 34 was Journey to the Large Magellanic Cloud, a Yamato-themed astrophysics exhibit at this museum. These photos of the outside and a promotional display were posted to Twitter a couple days before the exhibit closed on September 15.

Closing of the Beer Terrace

When the 2199 Art Exhibition first opened at Seibu Department store in Ikebukuro Tokyo on April 22 (revisit it here), an outdoor café called Yamato 2199 Beer Terrace of the Starry Sky also opened with custom Yamato décor – such as a case full of model kits flying into battle. When it closed on September 30, fans stayed to the very end as the Twitter photo above right attests.