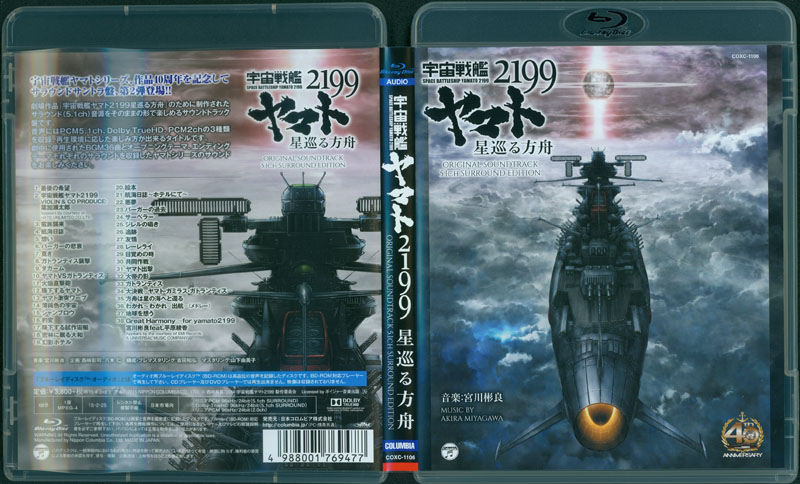 Blu-ray Audio is a brand new format for Yamato music, first adopted in December 2014 for the Voyage to Remember soundtrack. With the exception of a new closing song, however, all of its music was reused from the 2199 TV series. Ark of the Stars also borrows from that library, but has an ample amount of new score as well, making this the first Blu-ray Audio disc to debut completely new Yamato music. It is unknown at this writing if/when the album will come to CD.

The track titles are as follows: 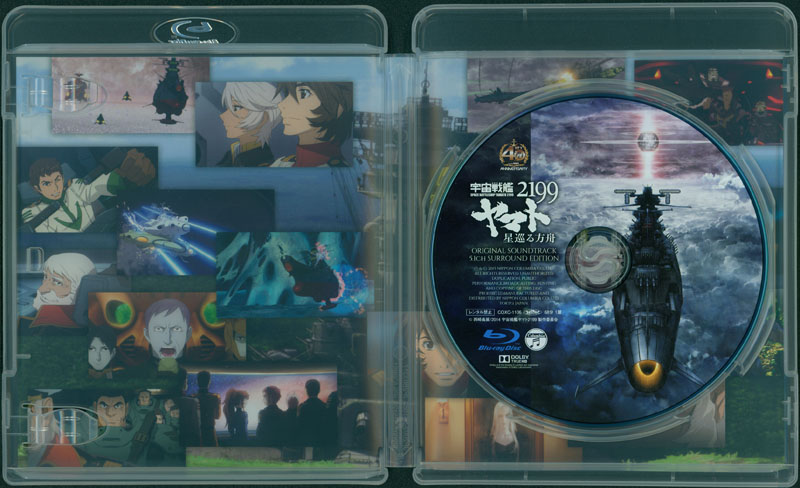 Also included is an 8-page booklet with song lyrics, info on other music products, and this introduction:

This disc is the 5.1 channel Blu-ray audio original soundtrack for Ark of the Stars, the new feature film that was released in Shochiku theaters on December 6, 2014. This is the second Yamato Blu-ray audio disc following the compilation film A Voyage to Remember. The story takes place on the way home, between TV series episodes 24 and 25 (of 26). Yamato and Garmillas join in the struggle against a Gatlantis vanguard fleet led by Dagarm. 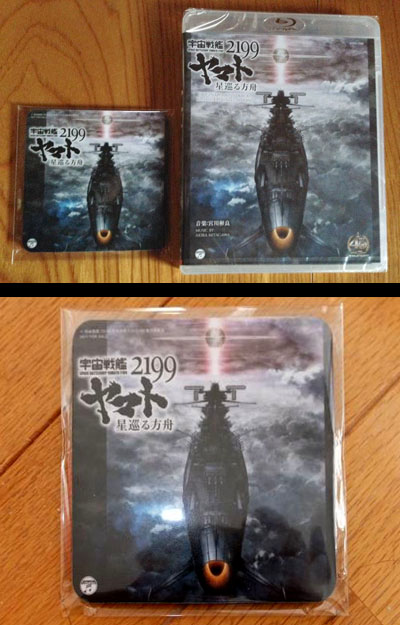 For a limited time, fans who pre-ordered the disc from Neowing
(the Japan-only side of CD Japan) received a matching coaster.

The music on this disc was newly recorded for the film by composer Akira Miyagawa. The opening theme Space Battleship Yamato 2199 contains a violin solo by Taro Hakase, and the end theme Great Harmony ~ for Yamato 2199 includes a vocal performance by Ayaka Hirahara. In the story, the BGM includes a song titled Wakare [Separation] on a record Captain Okita plays in his captain’s room, which came from another source.

Unlike the large quantity of BGM recorded as a music library for Yamato, a method closer to film scoring was employed, and the composer created the necessary music based on the length of the movie.

I’d like to mention something about Separation here. The song’s original title is Muss i denn [Must I then], and it is an old Swabian folk song from the rural southwest of Germany. Although it was originally a love song about a temporary separation from a lover, it was later often played as a war song or a marching song in its native country, and was heard in Das Boot (1981) in a scene at the start of the voyage. Toshiaki Okamoto, a composer who was involved in the founding of the Tamagawa Academy, translated the lyrics into Japanese as a song about parting with a friend.

Twenty years have passed since music for movie theaters came to be made in 5.1 channel, but now with Blu-ray audio you can easily enjoy at home the same sound source used in a theater. Since the audio has been recorded in various forms of linear PCM stereo – 5.1 channel linear PCM and Dolby True HD 5.1 channel – you can still enjoy it even if your Blu-ray environment is not capable of 5.1 channel playback. These 38 tracks total 68 minutes, and I hope you enjoy the music world of Yamato 2199 Ark of the Stars. 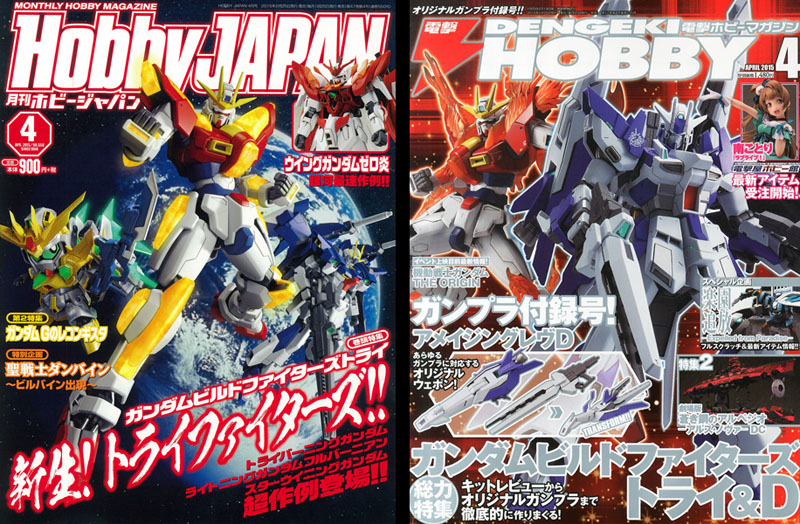 Magazine coverage has scaled down in proportion with activity, but it certainly hasn’t stopped. Hobby Japan and Dengeki Hobby each had one page of product news, but Dengeki also devoted five pages to Garmillas battle carriers Mirangal and Nilvades from Ark of the Stars. In both magazines, it was revealed that Bandai’s Mecha Collection model #17 will be a Gallunt with drill missile, which previously appeared as a bonus kit with the 1/1000 Darold battle carrier.

See the pages from these issues here.

In other magazine news, we appear to have a casualty in the ranks. Hyper Hobby, which has been a regular feature in these 2199 reports almost since the beginning, evidently ceased publication with issue #197, released December 29, 2014. No new issues have appeared since then, even on the official website. Thanks for the memories, Hyper Hobby! 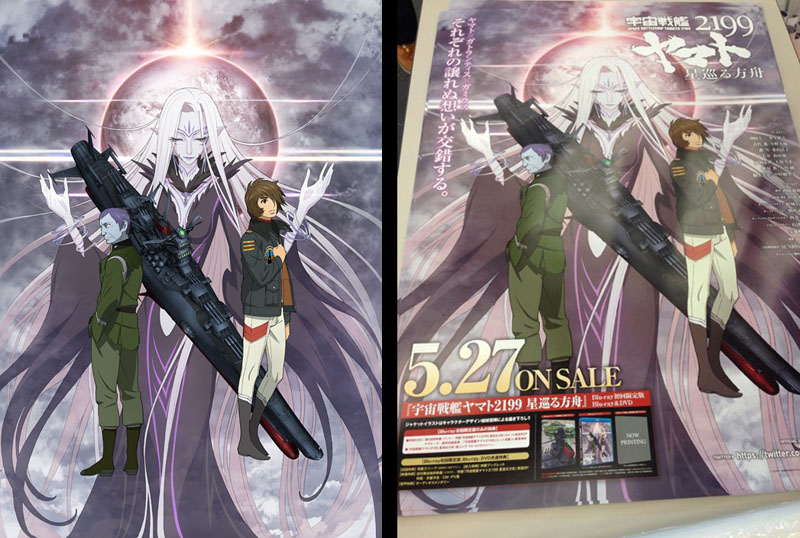 Posters for Ark on home video began appearing on this day, showing off the package art by Character Designer Nobuteru Yuuki. The next day, it became the home page image for the official 2199 website. 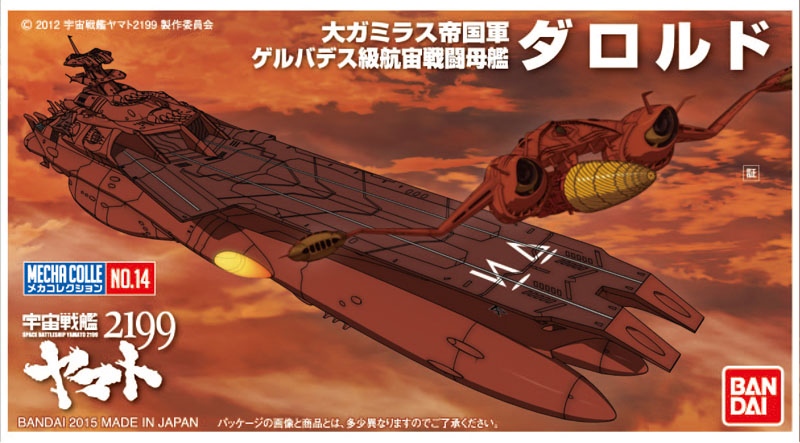 Garmillas battle carrier Darold joined the lineup on this day, bringing with it a tiny Gallunt with drill missile. Like its 1/1000 counterpart, it also includes optional deck panels.

This ship first appeared as part of Domel’s task force in Yamato Series 1, then was promoted to Dessler’s Battle Carrier in The New Voyage. It was released in three different scales, the most for any ship other than Yamato itself.

Yamato concerts have been around almost as long as Yamato feature films, but without the element of preservation to keep them alive afterward. Only three have been commercially released, and only one of those made it to video. The others are lost in time until further notice. (Though you can read about them here.) Thus, when the rare opportunity arises to see a new one, fans jump.

Akira Miyagawa has made Yamato music a staple of his other concerts, but this is only the second time he has composed and conducted a dedicated event, the first being the Yamato 2199 Orchestra Big Ceremony in November 2012. Concert 2015 returned to the same venue, the Maihama Amphitheater at the Tokyo Disney complex in Chiba. It was performed twice on Saturday February 28 and once on Sunday March 1.

The program was divided into two parts, named for A Voyage to Remember and Ark of the Stars. Thus, part 1 drew upon music heard from the 2199 series up to the departure from Iscandar. Part 2 picked up from there and took us home via the encounter with Gatlantis and Shambleau. Akira Miyagawa conducted a 60-piece orchestra and two vocalists, Ichiko Hashimoto and Yucca.

For more, here is an eyewitness report from one of the English world’s best-known Yamato fans, Ms. Ardith Carlton…

Composer Akira Miyagawa was the charismatic captain of the concert’s three performances, leading the Yamato 2199 Orchestra through his most momentous music from both the compilation film A Voyage to Remember and its recent theatrical side-story Ark of the Stars

But this was something more than a concert, beyond even the concert Miyawaga helmed at the same venue in 2012. This time, audiences were immersed in Yamato 2199 for much of the event through an ingenious combination of synchronization and effects. As pivotal scenes from the movies were shown on a huge screen with narration to bridge the story gaps, lighting effects bridged the world between the animation and our reality – sometimes encompassing the orchestra, as when they played in the baked red atmosphere beside the ancient hulk of Yamato in the setting sun, and sometimes soaring out into the venue with spinning lights and flashes heightening the excitement of the battles between Yamato, Garmillas, and Gatlantis forces. (And all, as Miyagawa mentioned with pride at one show’s end, performed without a metronome.) 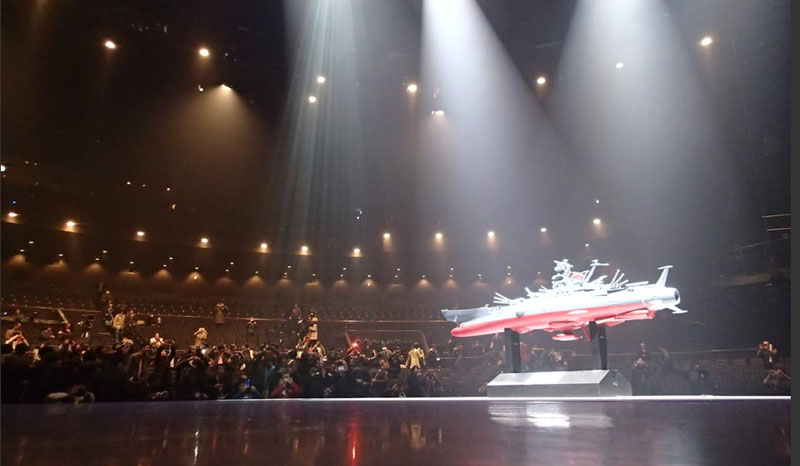 Yamato also made an inspiring appearance in the form of the 1/100 display model rising in a brilliant burst of light from an opening in the floor. It ruled center stage for most of the concert, sometimes pivoting to face a new direction.

Miyagawa feels it’s important to not only enjoy hearing music, but also see and understand what it takes to make the sound – and the capacity crowds got that opportunity in spades! The 53-piece orchestra was at times joined by the Tokyo Philharmonic Chorus, 38 voices strong, for such resounding songs as the Garmillas national anthem, The Ark returns to the sea of stars (the new movie’s rendition of a gem from Be Forever), and Wakare [Separation]. Also featured were a pair of vocalists: Yucca, who delivered the distinctive Space expanding into infinity opening scat, and Ichiko Hashimoto, whose mind-bending vocalizations were all the more astonishing in coming straight from a human being! 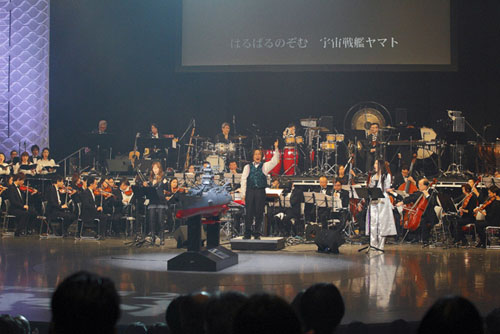 As the concert neared its conclusion, it paralleled Ark of the Stars by showing closing credits – a listing of performers and event staff – to the tune of Wakare (which top-level ticket holders were lucky enough to receive as an exclusive CD). Then came the emotional finish, with all the performers uniting in a special arrangement of the new movie’s ending song, Great Harmony ~ for Yamato 2199, made all the more moving as it accompanied scenes of Okita’s passing and Yamato’s return to Earth.

The crowd demanded an encore at each show, and Miyagawa had a present ready: three karaoke songs for all to sing, complete with the ultimate orchestral accompaniment! With lyrics on the screen for easy reference, the audience poured their hearts into The Scarlet Scarf, the UNCF Cosmo Navy anthem, and finally Space Battleship Yamato. Come the final show, though, fans wouldn’t let it end – and a grinning, grateful Miyagawa returned to the stage to let them sing the Yamato theme again, this time conducting the crowd instead of the orchestra. 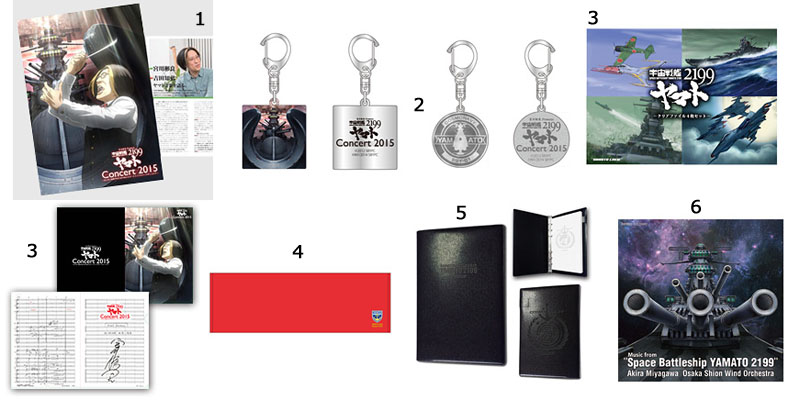 Wherever Yamato fans gather, there’s going to be merchandise to coax the yen out of their wallets, and Concert 2015 was no slouch in that department. On hand were a (1) program book, (2) a pair of key chains, (3) sets of clear files, (4) a scarlet sports towel, and (5) a personal organizer. There was also (6) a CD of a 2013 concert featuring Yamato music, which would soon be commercially released. 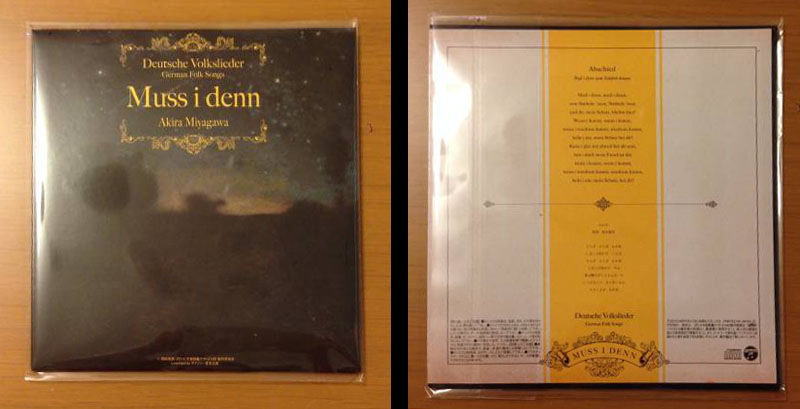 But the real gem, reserved only for those who purchased top-level tickets, was this exclusive CD single with three variations of Separation, the German folk song heard in Ark of the Stars. The sleeve is a direct reproduction of the album jacket from Captain Okita’s collection.

Since the concert spilled over into March 1, coverage will continue in our next report.

Another random collection of fan-made doujinshi (fanzines) that popped up during the course of the month.

Above are two ‘zines by the same creator, one featuring nurse Makoto Harada, and the other Jun Ichikawa, a new character who appears very briefly in Ark of the Stars. 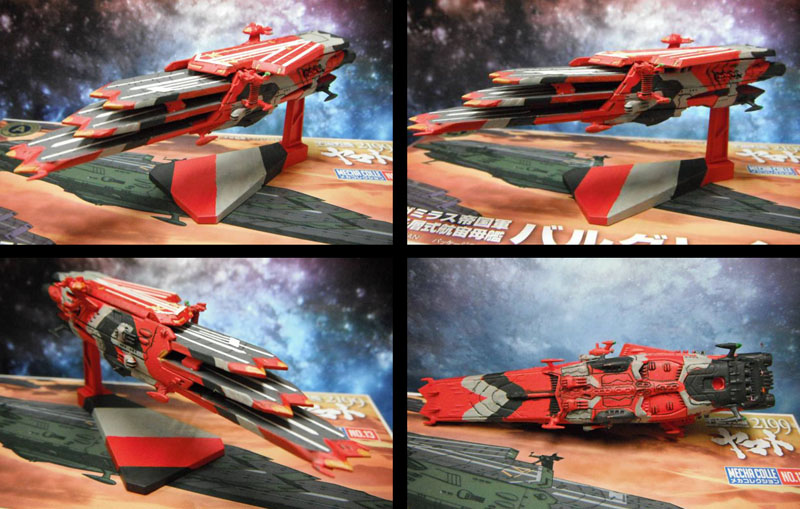 Usually this is where we’d look at someone’s modified battle carrier, repainted in Mirangal colors, but these time we’ve got something a little more creative: a Balgray carrier with the same paint scheme, posted at Yahoo Japan Auctions by a modeler with the online handle “Weeddaisuki.” 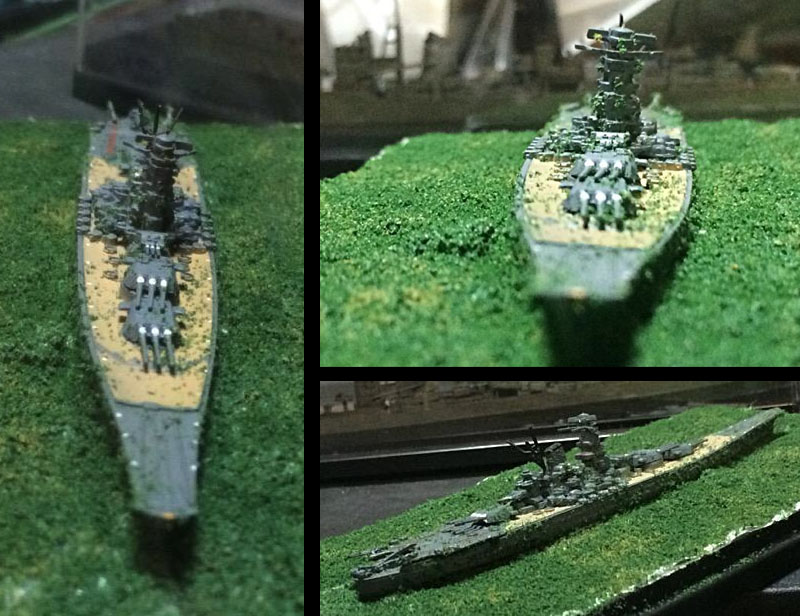 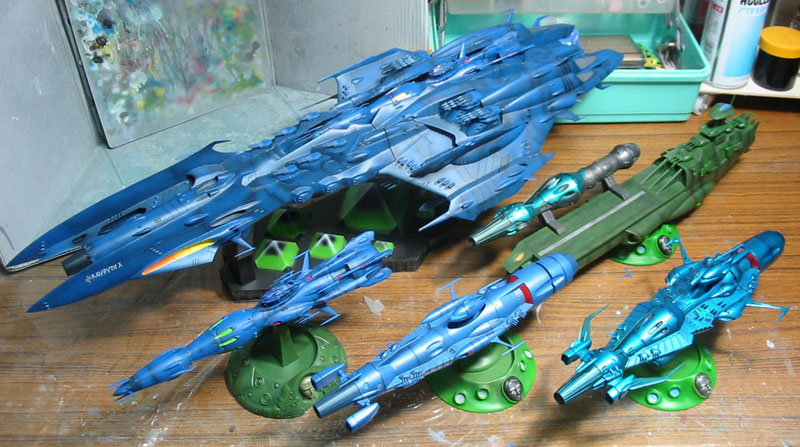 Garage kit maker Soy-ya! posted this image to Twitter on February 7, bringing several generations of Dessler’s flagships together on one table: original series, Playstation era, and Yamato 2199. Visit the Soy-ya blog and see what else is on their workbench here. 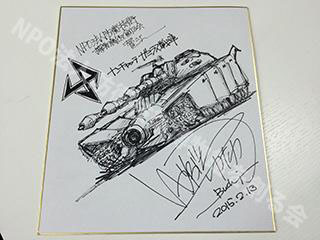 Japan doesn’t yet have a museum devoted to tanks, but there’s a group working to create one. You can visit their website here, and their Twitter page here. Through unknown circumstances, 2199 Director Yutaka Izubuchi sketched this Garmillas tank on February 13 for one of the members as a good-luck gesture. 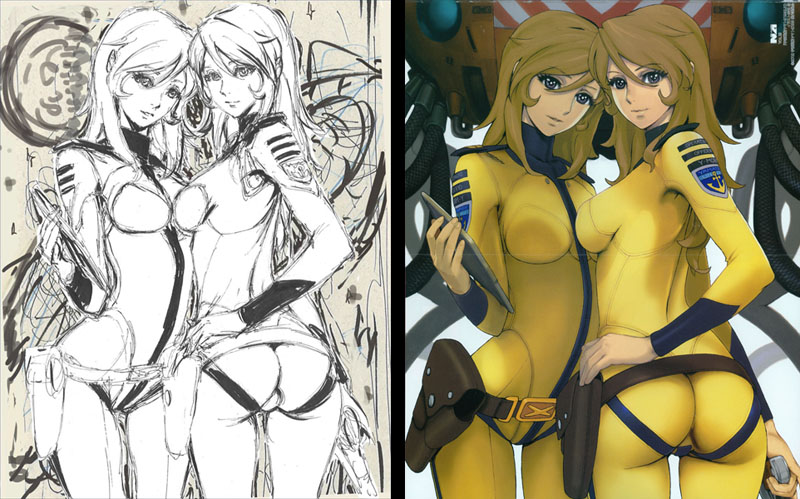 Artist Akira Yasuda brought attention back to a pinup illustration he did two years ago for New Type Ace magazine #18. On February 20, he posted the rough seen above left. The final art is shown at right.

Artist Ryuji “Umegrafix” Umeno continues to impress with his crisp, appealing renditions of 2199 characters. Follow Umeno’s work at these links: 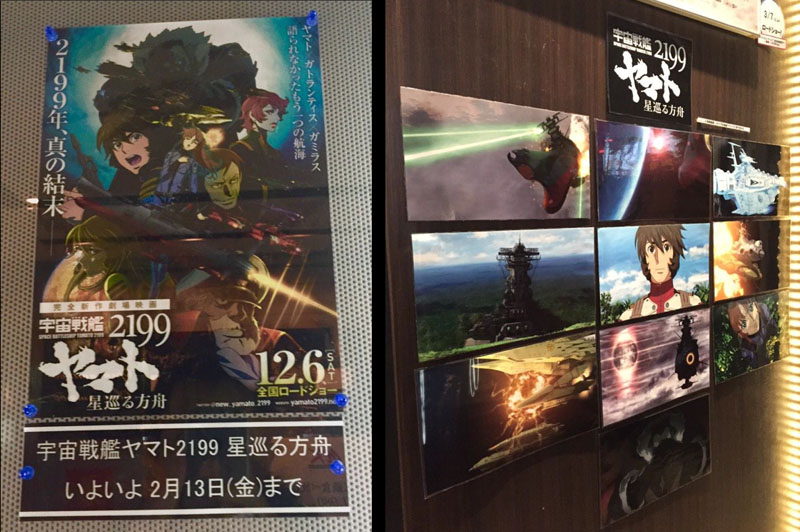 Quite possibly the last sighting of Ark of the Stars at a movie theater, in this case the Shinjuku Kadokawa cinema in Tokyo. These images were posted February 11 by Mat Hama. 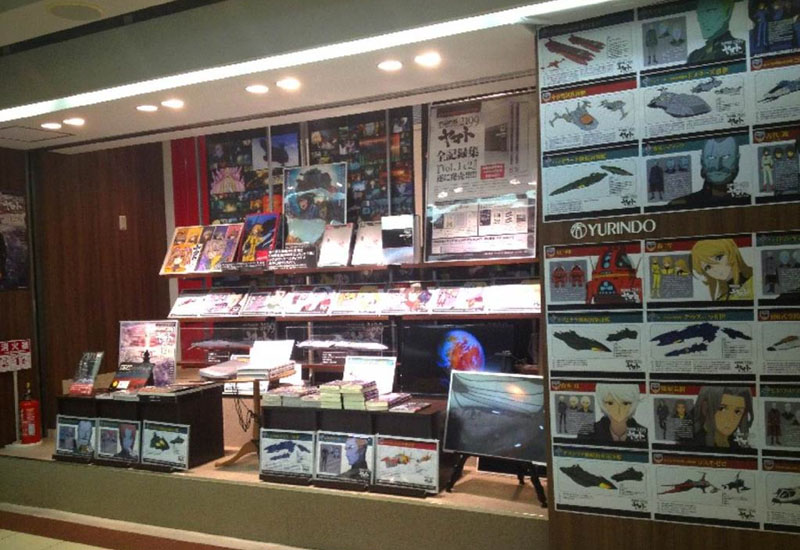 And finally, a treasure horde of Yamato 2199 products at Yurindo bookstore in Yokohama. Posted February 16 by “Maru BBY01.” See his Twitter feed here.