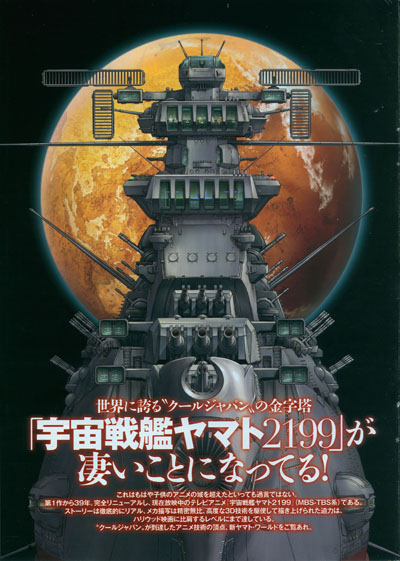 Space Battleship Yamato 2199
is a “Cool Japan” masterpiece
for the world!

It is not an exaggeration to say that this is beyond the level of children’s anime. It has been 39 years since the first work. It is a full TV anime renewal of Space Battleship Yamato, being broadcast (on MBS/TBS). The story is thorough and real, the precise depiction of mecha is matchless, and the power of its presentation makes full use of advanced 3D technology, reaching a level equal to even a Hollywood movie. We look at the new Yamato world at the peak of anime technology where “Cool Japan” is reached.

A trap waits in the skies. Dark clouds gather, and up ahead a red sun looms. Its mouth is filled with burning fire and its arms are Hell’s crimson flames. Fire one blast to break through an inescapable trap and effect an impossible escape.

Those who watched anime and embrace nostalgia should think for a moment after hearing this complex narration. “This is Yamato?” Unlike the work we saw as children, the reality in this version thoroughly overwhelms the viewer. For the adults who watch it, it has been transformed into something they can also enjoy. 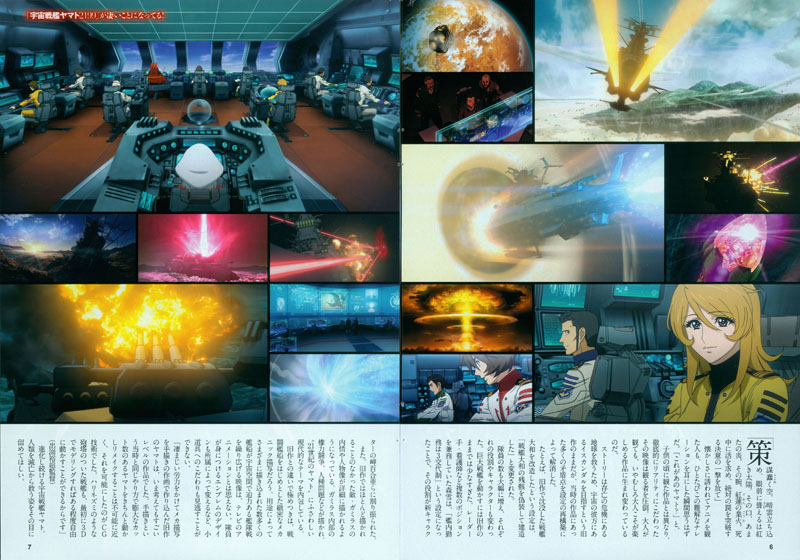 The story is about saving the Earth from a life or death crisis, and although it also aims for Iscandar across the distance of space, many discrepancies found in the original work have been eliminated through reconstruction. For example, the concept of converting the sunken battleship Yamato in the original has been changed so that “it was built while camouflaged as the wreckage of battleship Yamato.”

The number of crew members also increases sharply, and each character’s role has changed, too. In the original work, there were too few to operate a huge battleship. Yuki Mori held multiple positions, such as a radar operator and a nurse, and now that the concept is “there are three shifts on a warship,” her role was assigned to Yuria Misaki and other new characters.

Also, the enemy was not thoroughly presented in the original; the inside details and personalities of Garmillas are now shown in detail. Internal power struggles and race issues are shown, which incorporate modern themes suitable for a “21st Century Yamato.” And in a similar vein, a great variety of ships are shown in space, and the intensity of the fleet battles which unfold doesn’t seem like something out of TV animation at all.

The design of emblems worn by crew members that change by rank and the attention to small props cannot be overlooked either.

“It took tremendous effort to hand-draw that elaborate mecha in the previous Yamato, which I think is a work at an uncanny level even now. It’s next to impossible now to move Yamato with lots of scenes in the same manner as in the hand-drawn days, but this remake was made possible by CG technology. Also, a turret on a battleship can move freely to an extant if it is first modeled in 3D.”

Space Battleship Yamato continues to evolve. Keep your eye on the figure that saves human beings from extinction. 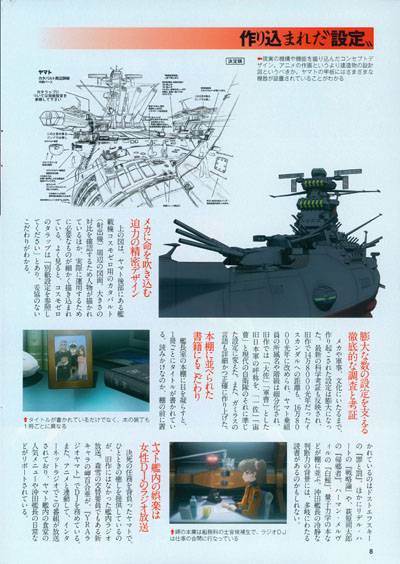 The power of precision design breathes life into mecha

The figure at the top of this page shows the area around the catapult (ejection machine) for the Cosmo Zero fighter at the rear of Yamato. People are drawn to confirm the size comparison as well as fine detail of how things operate. If you look closely, a note near the gangway ladder of the Cosmo Zero says “refer to attached model sheet,” and you understand the uncompromising approach.

Thorough investigation and research to support the huge number of designs

The design concepts for mecha, military affairs, and culture are enormous. The latest scientific findings are also reflected; the original 148,000 light year distance to Iscandar in the old work was changed to 168,000 light years. The crew’s rank and classes are subdivided, and whereas the designations of “colonel” and “sergeant” from the Imperial Japanese Army were used in the original, they have now been changed in accordance with the modern Self-Defense Forces. Also, the language of Garmillas was built up for detail and accuracy.

Particular books arranged on a bookshelf

If you look closely at the bookshelf of the captain’s cabin, each volume has a title on it. A half-read copy of Dostoyevsky’s Crime and Punishment is placed in front with books lined up the shelf, such as Strategy by Lidell Hart, Homecoming Person by Sakutaro Hagiwara, Herman Melville’s Moby Dick, and others on quantum mechanics. Perhaps Captain Okita’s background of calm judgement comes from a wide range of reading.

Yamato‘s onboard entertainment is a female DJ’s radio broadcast

Since Yamato is charged with desperate duty, a shipboard radio broadcast offers healing, which was not in the original. Yuria Misaki, a new character who is a backup for Yuki Mori, serves as the DJ for YRA Radio Yamato. Also, in conjunction with the anime, this show is broadcast on internet radio with reports on popular menu items in the gallery and the daily life of Captain Okita. 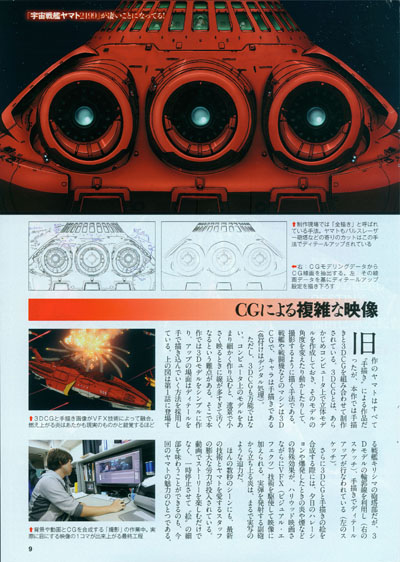 Whereas the original Yamato was made by “hand drawing,” this work is produced with a combination of hand-drawing and 3DCG. With this technique, a solid model is created beforehand on a computer, so the angle can be moved and changed in order to photograph and draw it. Machines such as fighters and battleships are done with 3DCG and characters are hand-drawn (and colored through digital processing).

However, 3DCG is not all-powerful. If a model is too finely detailed on a computer, the drawback is that there are too many lines and they can look dirty in a distant view. Therefore simpler 3D models are made and the scene is improved with detail drawn by hand. The figure at the top of this page is a turret of battleship Kirishima, which appeared in the first episode. The sketch on the right shows shows the 3D contours of the model, and the sketch on the left shows detail drawn by hand.

Furthermore, when 3DCG and hand-drawn pictures are composited, special effects are added such as sunset halation, or flame and smoke from an explosion, almost like VFX (visual effects) in a Hollywood movie. The flare that erupts from a secondary gun firing a live cartridge has the same force as a live-action movie.

The staff that loves both Yamato and the latest technology spends enormous effort on scenes lasting just a few seconds. One of the attractions of Yamato is not just enjoying the story, but also stopping to taste the details of the “picture.” 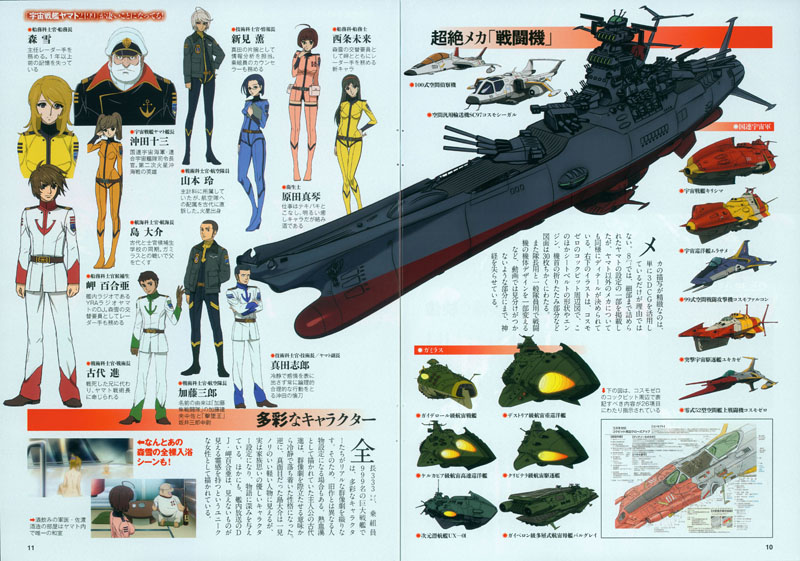 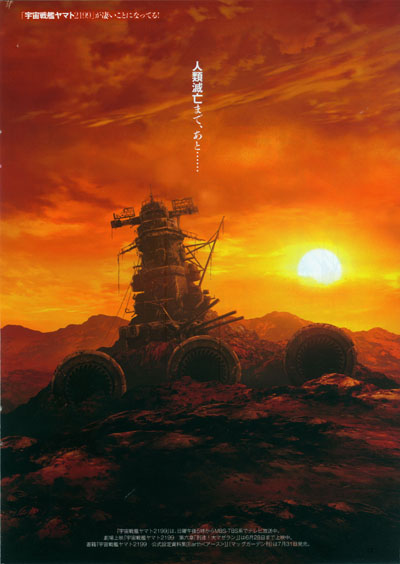 The use of 3DCG is not the only reason the depiction of mecha is so elaborate. Although some of the detailed designs for Yamato were published on page 8, there is a similar amount of detail on other mecha. Below right is the area around the cockpit of the Cosmo Zero. In addition, the seatbelt, the shape of the engine, and the folding nose come to almost 30 pieces.

Also, the body design of the fighter planes changes for use by the captains and the general members, and the animation frets even over parts that cannot be distinguished.

In a huge battleship that is 333 meters long with 999 crew members, a real group drama is woven around its diverse characters. Therefore, the concept for some people may differ from the original work. The chief character Susumu Kodai used to be a hot-blooded man, but in this group drama he is calmer and more settled, where by contrast Daisuke Shima used to be more serious and is now more light-hearted. In fact, he is a gentler, more family-minded character that gives depth to the story. Also, Yuria Misaki who is the onboard broadcast DJ, is depicted as a woman who is uniquely inspired to see invisible things.