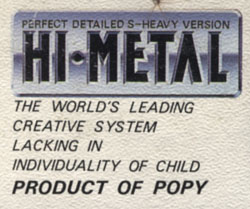 Don’t let the mangled English in their short-lived slogan fool you. Popy lacked in nothing whatsoever, particularly during the 1970s when they were the unrivaled leader in the world of Japanese toys. What does this have to do with Bandai? They created Popy in 1971. Yamato fans have long known and respected Bandai’s involvement with the famed Space Battleship primarily through their devotion to the world-class Bandai model kits that are covered in detail elsewhere on this site. But the depth of Bandai’s involvement goes farther than is immediately apparent, due in most part to their pantheon of sub-groups that have names and specialties of their own. During the golden age of the Yamato production years, the most visible of these was Popy.

Established after the plastic revolution of the 1960s, Popy’s foundations weren’t built around a single material, as Nomura’s had been with the tin trade. They could tool up with vinyl or plastic with equal ease, and this agility gave them a very successful inaugural year, the highlight of which was a replica of the utility belt worn by live-action superhero Kamen Rider. Experimentation with another new material, diecast zinc alloy, gave them an even better second year with their Kamen Rider motorcycle. This one hit so big that it created a diecast metal toy craze the likes of which Japan had never seen before.

Above left: A modern remake of the classic Kamen Rider belt and two of the later motorcycle toys. Kamen Rider is a live-action adventure series that continues to this day.

But the next two years would catapult Popy to the top of the toy pyramid, first with the debut of their 2-foot tall plastic “Jumbo Machinders” in 1973 and then with the paradoxically smaller metal “Chogokin” figures in 1974. Both capitalized on the giant robot mania of the early 70s (now referred to as the “Super Robot” era) lead by the iconic Mazinger Z. “Chogokin” was the name of the fictional super-alloy Mazinger Z was made of, and by adopting that name for their diecast mini-robots, Popy was marrying fantasy with reality in a whole new way. Naturally, Japanese kids gobbled it up.

From left: Jumbo Machinder Mazinger Z, Chogokin Mazinger Z, and one of the many “Godaikin” toys.

American kids did too, without even knowing it. When Bandai exported the “Chogokin” robots to the US, the name was changed to “Godaikin” in a stealth hearts-and-minds campaign that would soften us up for the coming anime onslaught. (And we all know how that turned out, don’t we?)

The path of Popy merged decisively with that of Space Battleship Yamato in 1980, when the opportunity to sponsor a new TV series came along. Nomura Toy had benefited tremendously from their investment in Yamato 2, landing as it did in the wake of the enormously successful Farewell to Yamato feature film in August 1978. Exactly two years later, the pattern was repeating: Be Forever Yamato was another box office bonanza and Yamato III was perfectly timed to reap the whirlwind on TV in October. Bandai’s Yamato model kits were already bestsellers, and now Popy could get in on the action, too. If nothing else, it would correct a near-fatal misstep they had taken five years earlier.

Popy had actually dabbled in Yamato toys once before in 1975 as the first TV series was well into its second half. In terms of marketing, Bandai’s early track record with Yamato was less than stellar. Their first round of model kits had been aimed at children who weren’t turning out in the expected droves. The anime’s sophisticated design and nuanced storytelling was proving far more popular with older viewers who weren’t looking for kiddified versions of the amazing mecha they were seeing on TV. It was still too early for Bandai to know this when two Popy toys hit the market: a diecast ‘Popynica’ Cosmo Zero fighter (above left) and a 4″ soft-vinyl Analyzer Robot (above right). 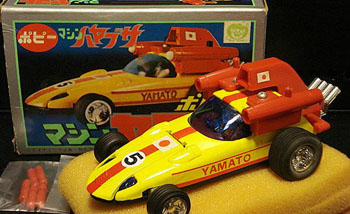 At right: just for the sake of confusion, a Popynica vehicle that had nothing to do with Space Battleship Yamato

There was every reason to expect success with these. Previous ‘Popynica’ toy vehicles had done very well (‘Popynica’ was a mashup word combining ‘Popy’ with ‘Mini-Car’), and who couldn’t love such an adorable little plastic robot in multiple colors? The true Yamato fans, that’s who. Neither of these toys satisfied the craving for accurate 3-D representations of Studio Nue’s revolutionary mechanical designs, and the first attempt at a Yamato toy line was pretty much a flop.

It was an expensive lesson, but Bandai finally got it in time for their second wave of model kits to hit the right groove, and when Popy signed on as the toy sponsor for Yamato III, they would benefit from Bandai’s experience. What’s more, they had Nomura’s valuable example to follow, which showed them which steps were worth repeating and which weren’t. The result was essentially a “Mark II” version of Nomura’s efforts, released entirely within the same compressed timeframe of two months after the October debut of the TV series. 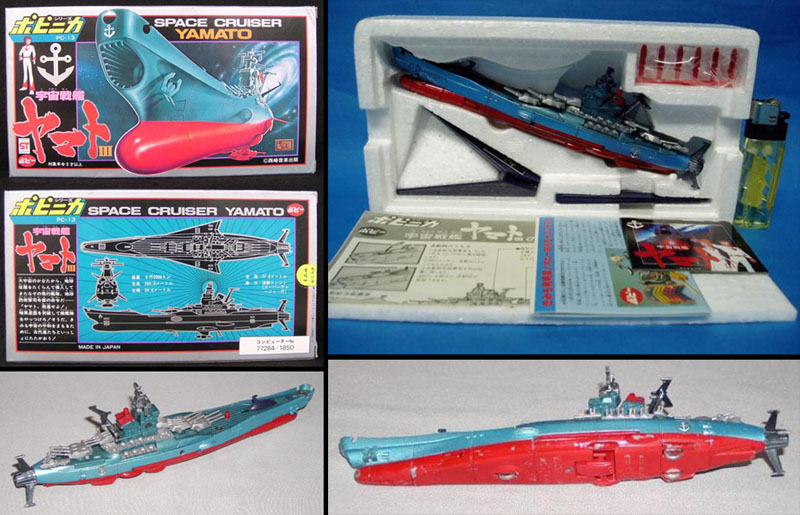 The first release was a combination diecast & plastic Yamato painted in metallic colors, slightly smaller (about 7.75″) and more slender than Bandai’s 1978 model kit.

Action features: a button on the upper hull could fire missiles through the wave-motion gun, the third bridge could tuck in to let the ship roll around on metal wheels, the wings could pop out, and panels on the forward bow opened to reveal a new Cosmo Radar that had been designed for Be Forever. 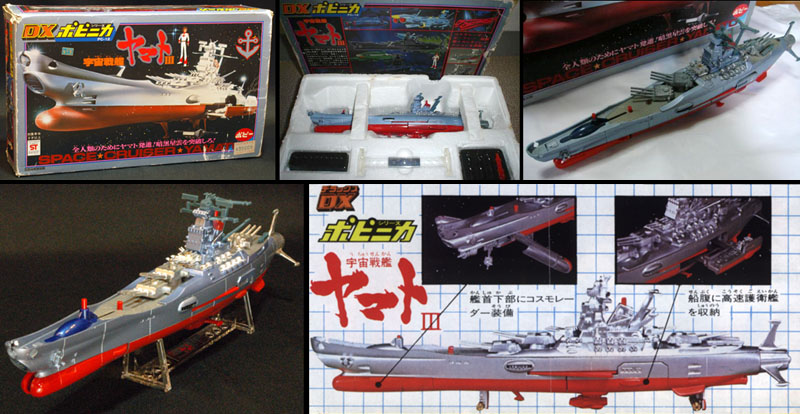 The next-size-up Yamato (11.5 inches long) had very similar construction but more plastic parts, a different stand, and some additional action features. Instead of a tuck-in third bridge the toy now had fold-down wheels, and a pull-out section was added to mimic the new port-side hatch for the Cosmo Hound. 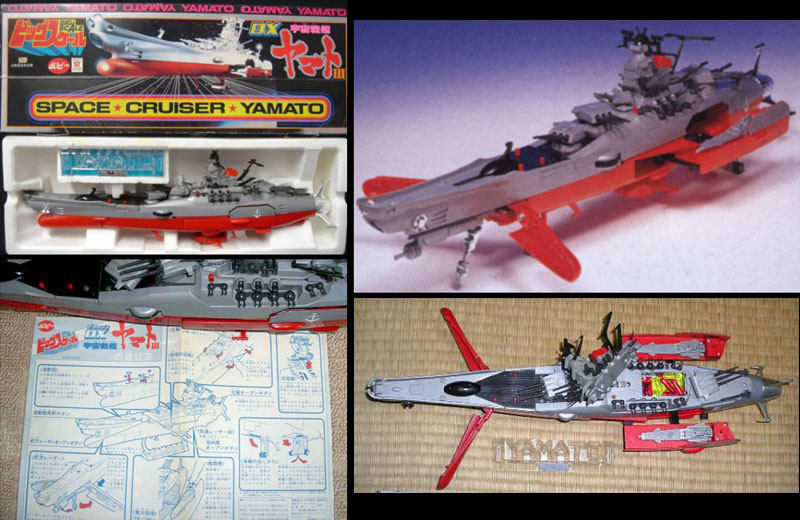 This behemoth held the title of biggest Yamato toy ever made until it was finally topped in 2006 by designer toymaker Liberty Planet. Calculated at 1/510 scale, it stretched to almost 20.5 inches, just 1/4 inch short of Bandai’s massive “Cosmic Model.” Now more plastic than metal (so that a kid could actually lift it), it preserved and one-upped all the action features of the smaller Yamatos, as shown in these photos. Read another review of this toy here.

Of course, Popy was equally skilled at smaller toys such as this set of ten miniatures. Sold individually or in 5-packs, they were plastic casts of Bandai’s classic Mechanic Scale model kits, preassembled and detailed for fans who didn’t care to do the work themselves. Ships 1-5 followed the same order as Mechanic Scale models 1-5, but ships 6-10 were cherry-picked from models 7, 15, 16, 19, and 22

These ships were a precursor to the ‘candy toy’ sets that rose to prominence over subsequent years, packaged in multiples as shown above. 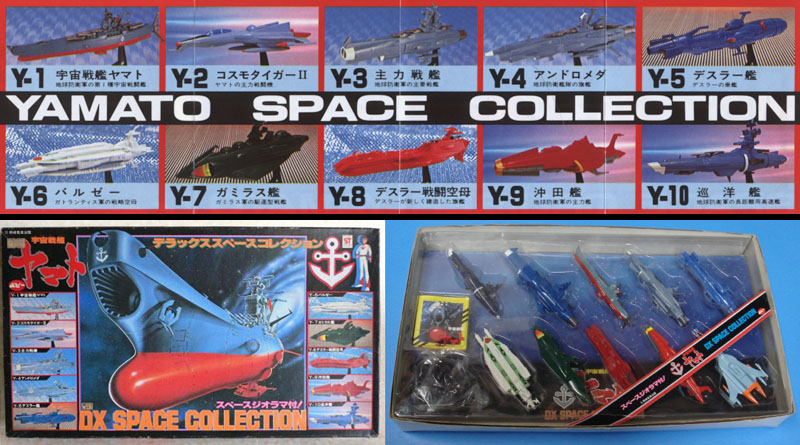 Another way to obtain the set was in this all-in-one box. You didn’t get the individual packages, but any kid would have been overjoyed to find this under the Christmas tree. 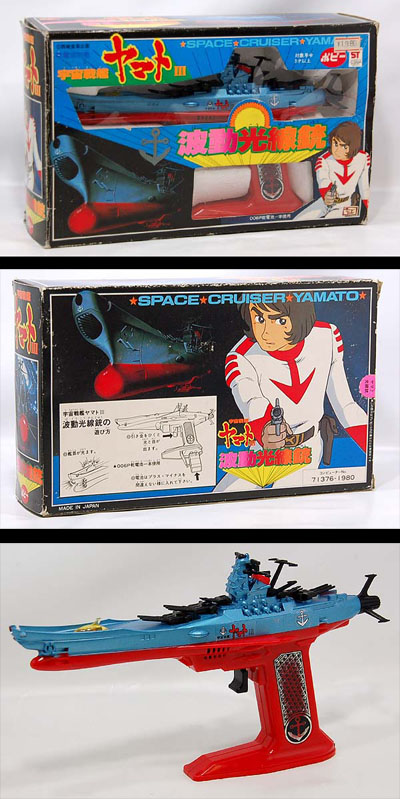 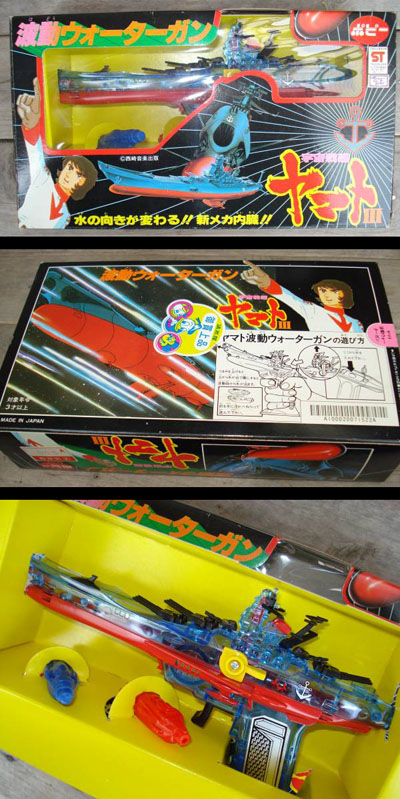 What could be better than a Yamato you held in your hand? A 9″ Yamato with a pistol grip that could shoot things! The red-handled electronic lightup version was similar to the old Nomura Cosmogun with lights and sound, while the blue-handled version was a Wave-Motion watergun to douse your friends. Both originated from the same mold, but fitted with different gizmos and were cast in different plastic. 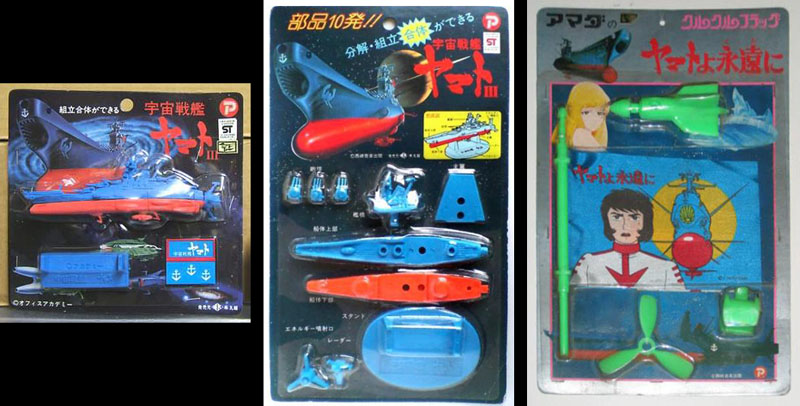 Though they were produced by another toy manufacturer called Marukoshi, Popy vetted and distributed both of these minis, which were patterned after Nomura’s “gummy eraser” figures. Both were the same size, but the “deluxe” model came unassembled with a larger base. Popy also served as distributor for another company’s Yamato product, a bike flag made by Amada shown above, far right. (The ‘P’ symbol on the packaging above was used for products that Popy distributed but did not manufacture.)

This shooting gallery game came with a 15″ x 24″ galactic map, on which you could place a variety of enemy ships ranging between 1 and 2 inches and take them out with your wave-motion dart gun. The set came with one of the Marukoshi rubber Yamatos and the only Galman and Bolar ship toys that have ever been made as of this writing. See a full report on this product here. 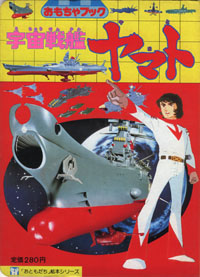 This unique children’s “panel book” (so named because of its thick cardboard pages) provided a creative look at the world of Yamato spaceships using Popy and Bandai products rather than the animator’s drawings that were featured in most other books of the time.

Popy was the second and last company to manufacture toys during the golden age of Yamato production. It would be almost another 20 years before anyone else dared to pick up the gauntlet. Naturally, it had to be Bandai.