The opening of the Space Battleship Yamato movie in August 1977 was the biggest thing that had ever hit Japanese cinema. The opening of Farewell to Yamato a year later made it look like a warmup.

On August 5, 1978, (actually, the night before) fans stood in fantastically long lines at Toei theaters, easily outnumbering those who had done the same a year earlier. This was especially true for theaters at Shibuya, Shinjuku, and Yokohama, where there were more moviegoers than seats, and theatre owners scrambled to rent out other theatres to use as waiting rooms. Animage, a new anime magazine published by Tokuma Shoten, appropriately declared it the “Summer of Yamato Fever”.

Some audience members teared as soon as the film started rolling, probably anticipating the tragic ending suggested by the title. Every time Kodai, Shima, Sanada, and all the other beloved characters appeared onscreen, sighs and sobs swept through the audience. The movie simply flew by and reached its final scene. The theater was filled with tears for Kodai, who alone steered Yamato against the menacing “Gatlantis” to fight for peace in the universe. Makoto Watanabe, one fan who later turned pro as a model designer, had this to say about the experience:

“My tears wouldn’t stop flowing after watching the movie. I recall sitting in the movie theater, totally embarrassed, and unable to leave until my tears had dried. Looking at the others around me, I noticed that they all appeared to have cried as well. That’s how powerful Yamato was.” 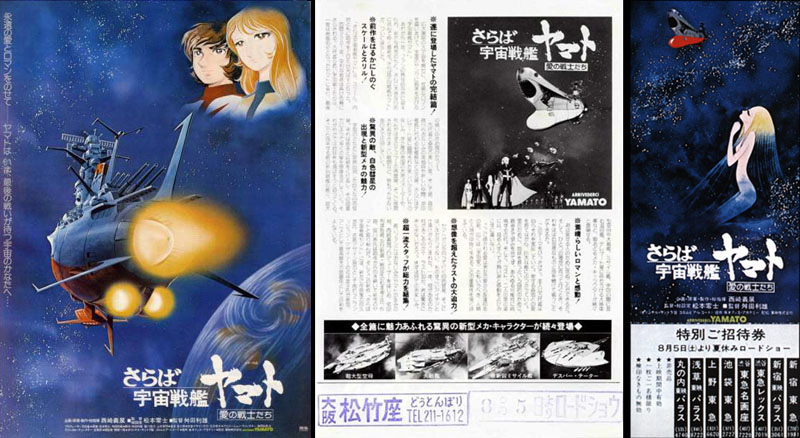 Above: original movie flyer and ticket, circa 1978

Some fans returned to theaters again and again, creating the groundswell for entirely new fan clubs. Interestingly, even some of the most devoted fans shared the opinion that the Yamato series should have ended here, which further attested to the huge success of the movie. Of course, this was not to be. But even now, there is still a vocal minority that wished Yamato had not gone any farther. Farewell was so good, so emotionally satisfying, that it must have seemed like more Yamato would have only diminished its greatness.

None of this seemed to hurt video sales, since Farewell has been released just as frequently as each of the other films. One could suppose that fans who seriously wanted it to end the saga restrained themselves from buying the later material. As if anyone could resist. 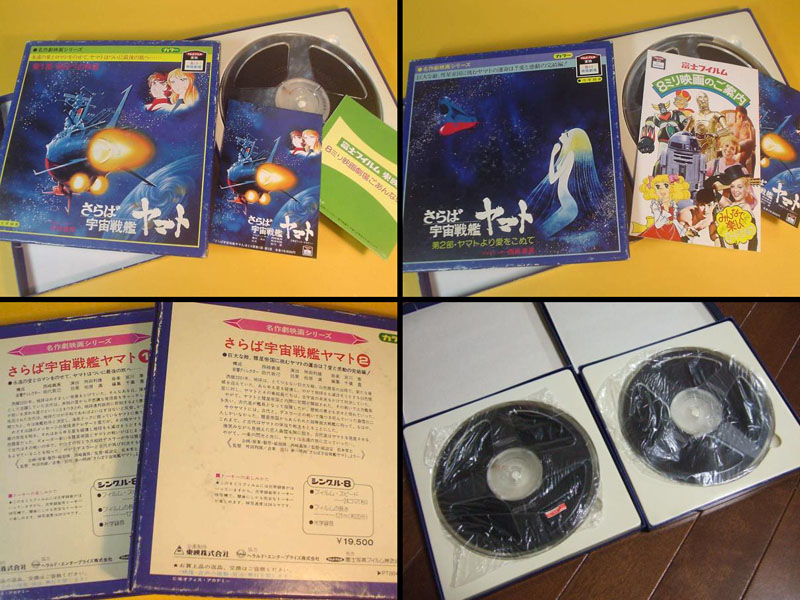 Prior to the video boom of 1983, there were actually two ways you could watch Farewell at home on demand, both on 8mm film. Toei teamed up with Herald Enterprise, who had manufactured similar reels for the first movie, to release the two 20-minute reels shown above. Both included sound and color. Part 1 was titled “Hope for Tomorrow,” and Part 2 was “From Yamato with Love,” named after the ending song. At 19800yen apiece, this was an incredibly expensive way to watch only one quarter of the movie.

Priced a little more friendly was the Yamato “Cassette 8 Movie,” released in October 1978 by the Nomura Toy company. The all-in-one set came with a projector, a film cassette with a running time of just two minutes, a flexidisc soundtrack, and a script to follow along. By the time Farewell eventually made it to home video, countless fans would have had every frame of those two minutes committed to memory. (Read more about Nomura’s Yamato products here.) 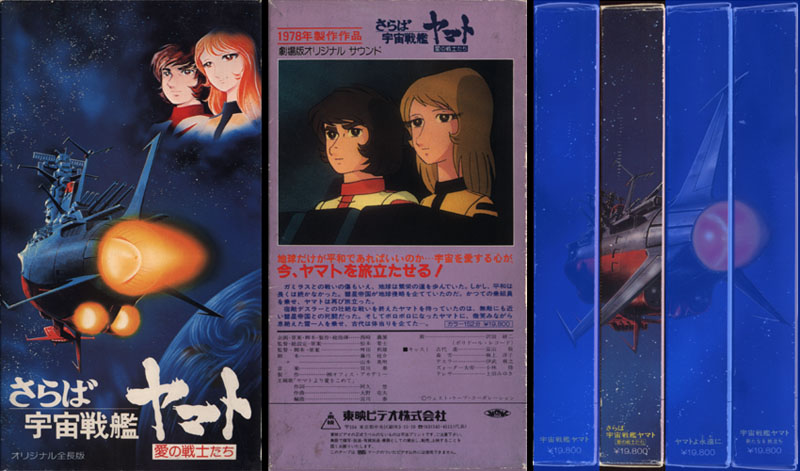 The first chance everyone had to see all of Farewell at home was with the Toei release (on both VHS and Beta) of the four movies that preceded Final Yamato. Timed to match the opening of that film in March 1983, each tape box had part of an image on its spine (above right) that combined into a painting done for Final Yamato‘s release.

VHS and Beta video tapes were also released by Nippon Columbia in 1983, but are not shown here. 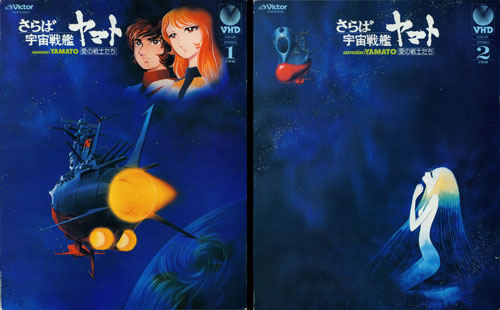 Advertised in the Final Yamato movie program book, Victor’s VHDs hit the market one month after the film opened. They were more durable than tapes but still susceptible to the same sort of damage that could afflict LP records. Their packaging was more impressive, especially when a long-running movie was spread out over two discs. Victor’s VHS/Beta release occurred in 1984, presumably after deals with Toei and Nippon Columbia had expired. 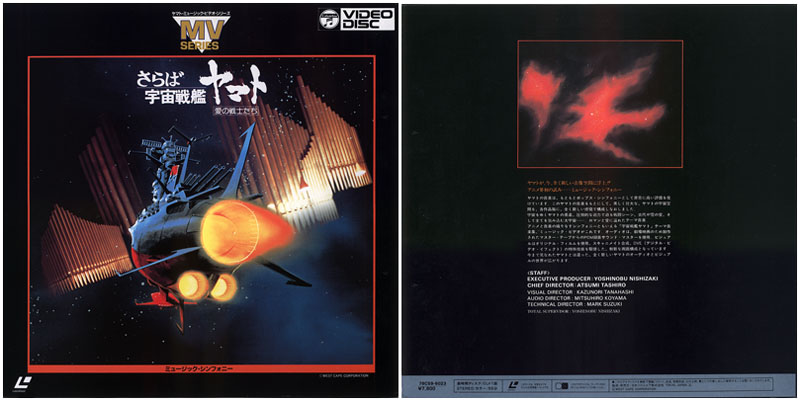 True home video connoisseurs lavished their time and money on visually superior and theoretically indestructible LDs by the mid 1980s. Nippon Columbia, long the home label for Yamato music, was the natural choice to release the MV series, an innovative set of programs that combined re-edited footage with symphonic scores. Read more about the MV series here. 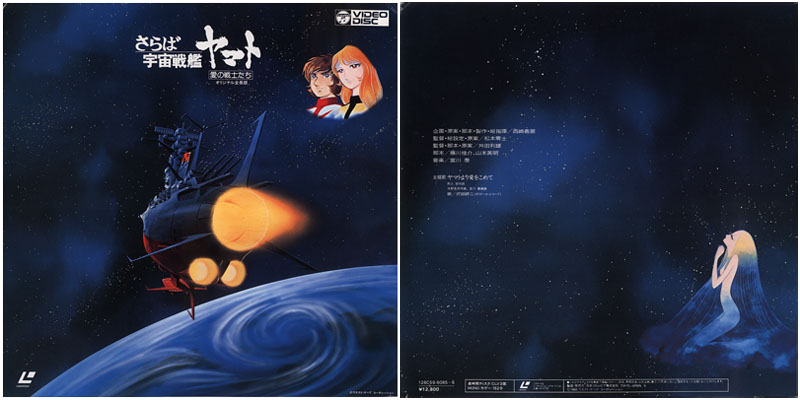 A year after the MVs made their debut, Nippon Columbia followed up with their own handsome edition of Farewell to Yamato on LD. Outer sleeve shown above, inner sleeve shown below. 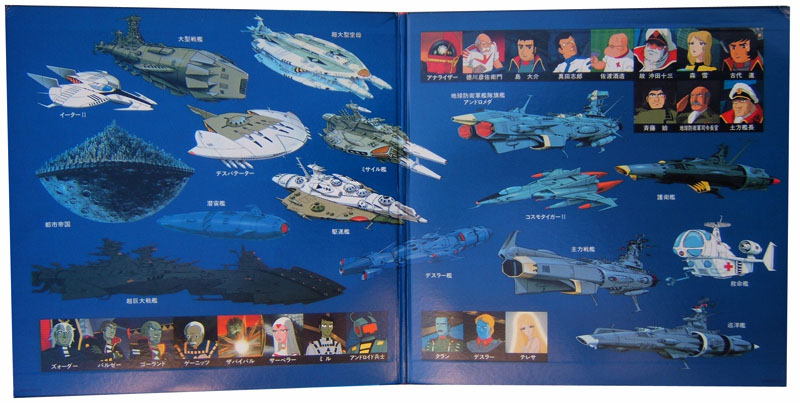 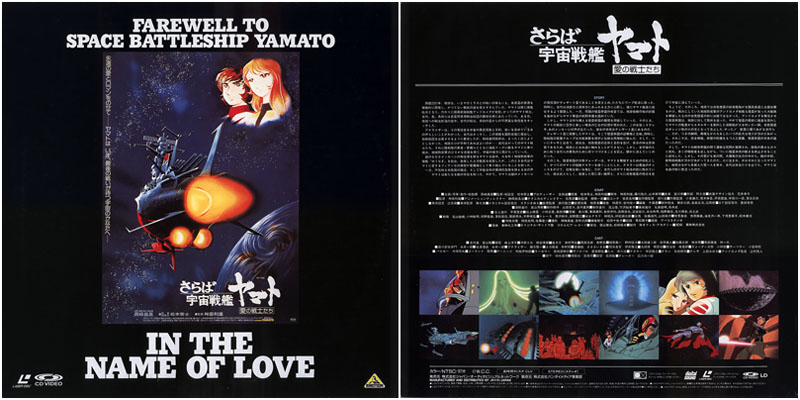 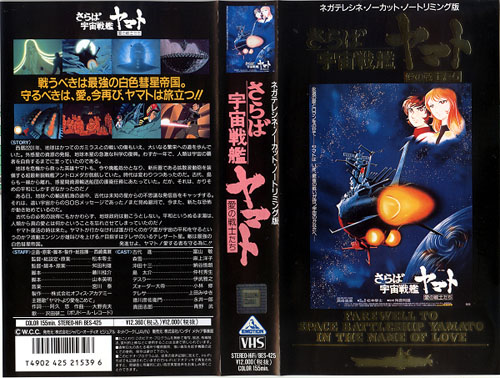 The entire Yamato video catalog found a permanent home with Bandai’s Emotion label in 1989 and got a repackaging on both of the now-standard formats. The LD was part of the first Yamato box set, called the “Perfect Collection.” Containing all five movies and a bonus disc of trailers and other artifacts, it also firmly established Farewell to Yamato as the official English translation, laying to rest the previous international title of Arrivederci Yamato. Both the LD box and the VHS sleeve featured gold-stamped logos. 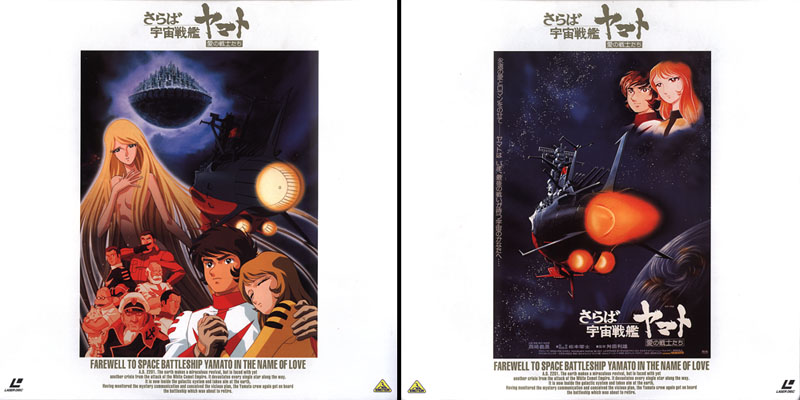 Since their first Yamato LDs were all limited to pricey box sets, Emotion addressed the need for individual releases in 1993, a year before Yamato‘s 20th anniversary. They sweetened the deal with stunning new jackets by anime designer Hiroyuki Kitazume (above) and extended liner notes on the inner sleeve (below). Also included was the original theatrical trailer. These were timed to promote the forthcoming Yamato 2520, which made its debut in 1995. 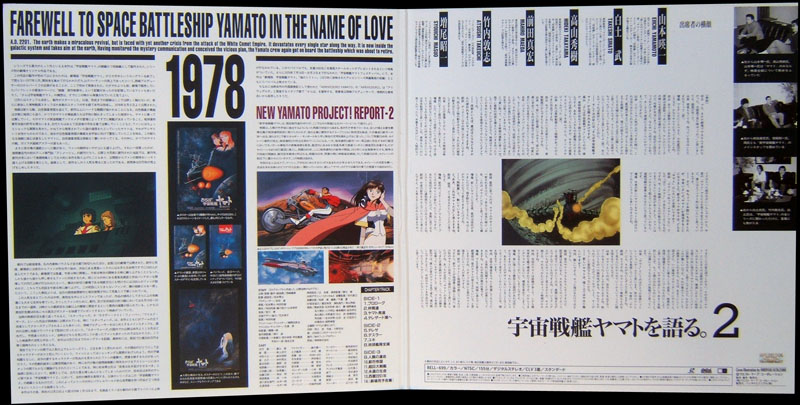 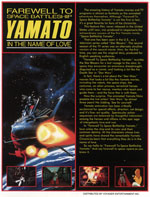 Farewell made its home video debut in the US after a brief theatrical appearance by an English-dubbed version that caught everyone by surprise. The dub had been made years earlier for an international marketing campaign in 1988, which is when the Farewell name first appeared to replace Arrivederci. Approximately 30 minutes shorter, the dub was a curious hybrid of Yamato and Star Blazers, combining character names from each. However, it did not feature the original Star Blazers voice cast. Voyager’s release of this edition (above left) in 1994 was followed a year later by the full-length subtitled version (above right).

Click on the image at right to see Voyager’s promotional flyer for this film. 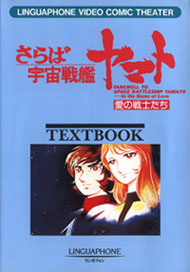 The Japanese release of the English dub followed the US release by one year. Production on the dub had actually been completed in 1989, most likely by Streamline Pictures (though the movie is credited only to Voyager Entertainment) whose dubs of Cagliostro Castle and Sherlock Hound were also released in Japan by Linguaphone. Packaged as an English teaching tool, the set came with a bilingual textbook (shown at left) with the complete script. Click on the images below to see some of the interior pages.

The last hurrah for LD and VHS came a year in advance of Yamato‘s 25th anniversary when Emotion revised the packaging to reflect their new partnership with Leiji Matsumoto, the beginning of a renaissance that would re-open the floodgates of Yamato merchandising. The the new jacket artwork was created by anime designer Toshihiro Kawamoto in the vintage Matsumoto style. 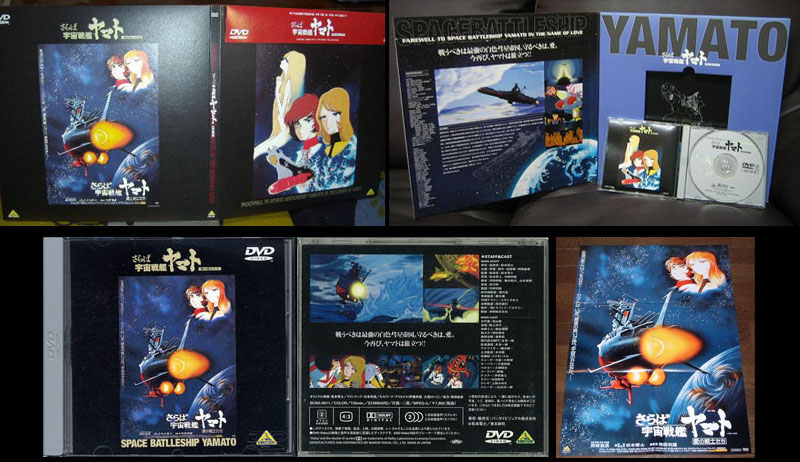 To commemorate the 20th anniversary of Farewell, it became the very first Yamato film ever released on DVD in an unusual package that was not to be repeated with the others. The exterior sleeve was the size and shape of a laserdisc, but the DVD was contained in a nested jewel case with a mini-poster tucked inside. A standard-format DVD (below) followed in 1999 in packaging that matched that of the four other films. In addition to the theatrical trailer, one new bonus feature was a second audio track re-engineered to play the music in stereo.

Emotion teamed up with Asian distributor PW to release all five movies in a box set. The region 3 edition of Farewell to Yamato is highlighted above right. 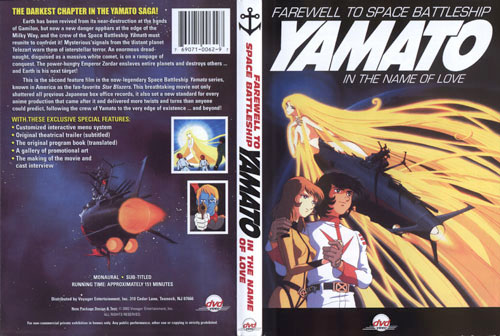 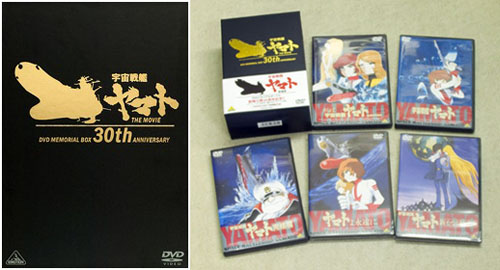 Farewell and the other films were released in this box set to commemorate the first Yamato movie’s 30th anniversary in August, 2007. In a very real sense, the first movie had been the ignition spark for the entire engine of anime commerce that made it possible for Bandai (and many other companies) to thrive. It would have been unthinkable for a product like this not to have been made. 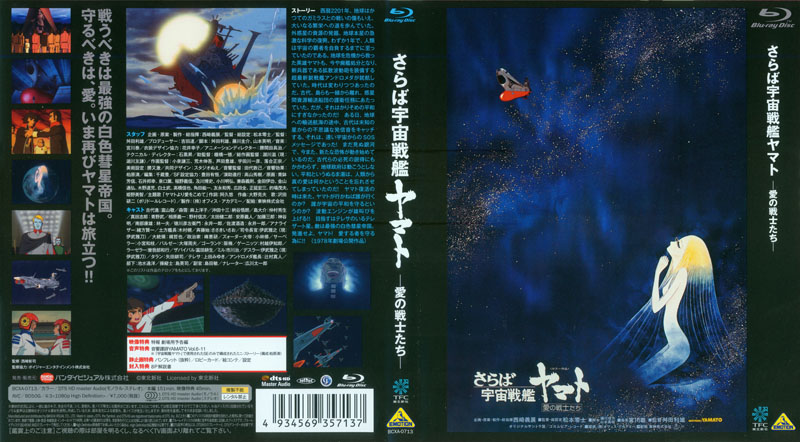 When the classic Yamato movies finally came to Blu-ray in 2013, Farewell was once again the first to arrive. It is gorgeous to behold, sharper even than its original theatrical release, and even had one of its most infamous mistakes corrected – Yamamoto’s elbow no longer pops out of his Cosmo Tiger cockpit during his final salute.

Bonus features were extra special on this one: the original trailer was included, along with the sound clips from the ’92 Yamato 2 LD box set, a digital version of the 1978 program book and lobby cards, and – best of all – the complete storyboard of the film by Yasuhiko Yoshikazu (never before published in any format). 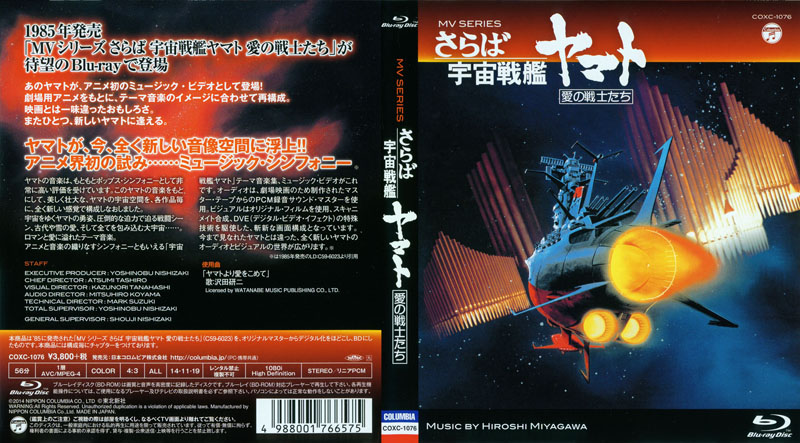