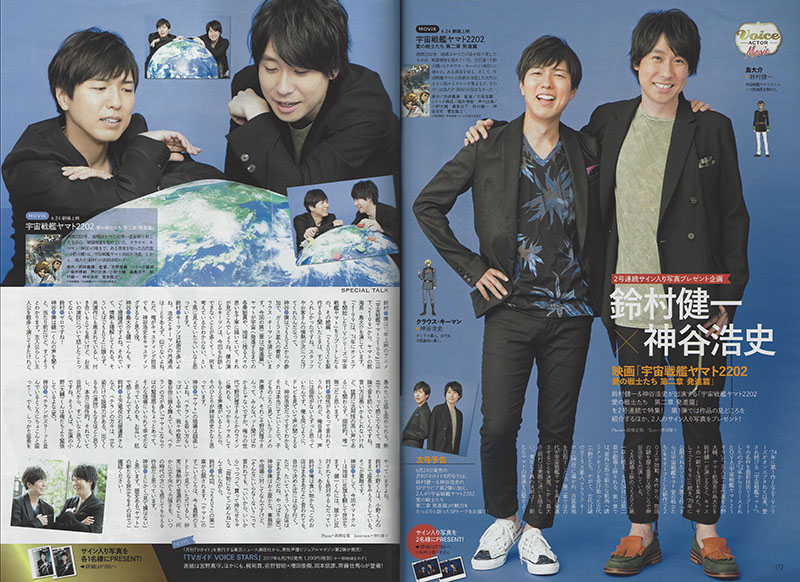 Suzumura: Starting in 2012, I played Chief Navigator Daisuke Shima in Space Battleship Yamato 2199. 2199 is the reboot of Space Battleship Yamato, which started broadcasting in 1974. When I heard that the sequel 2202 would be produced, I was very happy. The passion of the staff and the viewers became the next link.

Kamiya: I started participating with 2202. I play Klaus Keyman, a young man from Garmillas. In Chapter 2, Launch Chapter, the highlight is how carefully we see the thoughts of the crew , and the people who stay on Earth, before Yamato takes off into space. There are many things I can’t say about Keyman at this time…I don’t always know what he’s thinking. I think you just have to see it for yourself.

Suzumura: Keyman has a lot of secrets, doesn’t he? I don’t see any similarities between Hiroshi and Keyman. They aren’t similar. But if I was in charge of casting, I wouldn’t think of casting anyone but Hiroshi Kamiya.

Kamiya: Both Daisuke Shima and Kenichi are very theoretical. Nevertheless, he also understands passion. This is not limited to 2202, but I’m blessed with the co-stars I work with, and we’ve been acquainted for a long time but we’ve never talked about each other’s acting.

Kamiya: When I hear Kenichi’s voice, of course I recognize it immediately. Although he’s played many heroic characters, the side of him that’s like Shima is also solid. It’s not with a feeling of hot-bloodedly yelling “agh!”, but theoretically weaving the sounds. This may not be a good way to say it, but though he has a very versatile voice, I think it’s unique. A one and only.

Suzumura: I’m glad to hear that I have some individuality. As for me, I never thought I had any personality in my voice. But in the same way, when I hear voices on TV I recognize Hiroshi Kamiya immediately. He’s really amazing. The most recognizable voice actor in the anime I saw as a child was Masako Nozawa. If there is a voice actor who is the Masoko Nozawa of our generation, one who will be imitated someday, I think it could be Mr. Kamiya.

Kamiya: The Yamato site is really fun. There are lots of veterans and young people, and those of us in the middle can act the most freely. There’s a feeling of tension unique to Yamato when veterans are in the room. I’m happy to be part of it. We all feel it under our skin.

Suzumura: Various veterans like Unshou Ishizuka in the part of Ryu Hijikata are very convincing from just their posture alone. I think what comes out of that is a really unique personality, and because it’s natural it’s just amazing. Speaking of which, our star Daisuke Ono is more tense than we are. (Laughs)

Kamiya: He usually sits quietly with the veterans, but he’s a good chairman, too.

Suzumura: I’d like to be as good a chairman as Ono. It’s wonderful.

Kamiya: This time the Yamato crew rebels against Earth and starts on a voyage. Kenichi, did you ever do something in defiance of someone?

Suzumura: I guess with food. Even if it is said, “This shop is pretty good,” I always go to the shop and decide for myself. However, most of the shops are “pretty good” after all. (Laughs)

Kamiya: I get souvenirs. If I’m in hot water with the office, I’ll buy something for them even if a shopkeeper says, “Do you need that much?” I’ll say, “It’s fine, it’s fine.” And they say, “Sorry about the extra baggage.”

Suzumura: Chapter 2 of 2202 is coming out this time. The great thing about Yamato is that you can see it as the latest SF, a very passionate and universal thing. I think it’s a work where anyone at any age can gain the strength to confront something.

Kamiya: Anyway, I think “there’s no harm in looking at it.” Please check out the new launch of the historic Yamato for yourself! 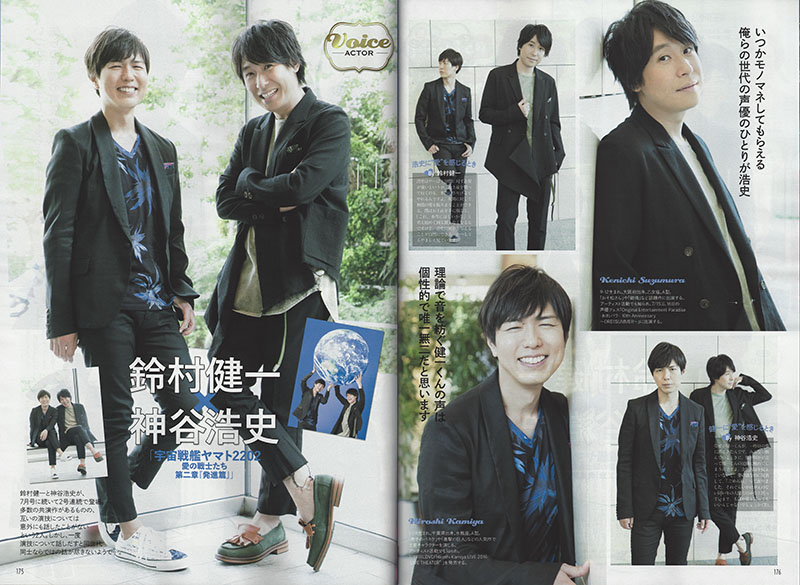