Fan Activity and the Shock of Yamato‘s Discontinuation 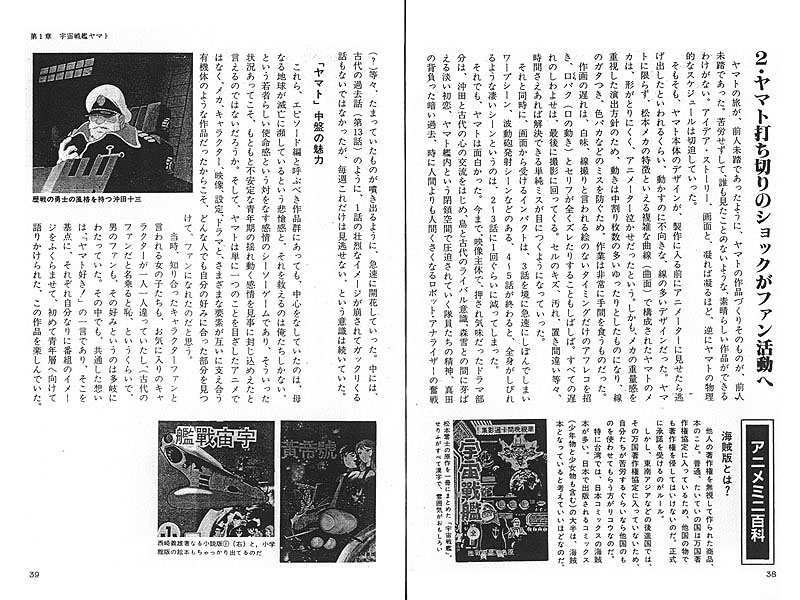 Yamato‘s journey was just as unprecedented as the making of the series. Such a remarkable piece of work could not have been created without hardship. The physical hardship of production only intensified as the onscreen story progressed.

Even from the beginning, the artists thought Yamato‘s complex, elaborate design could not be animated. Its complicated curvature, a hallmark of the Leiji Matsumoto style, would be hard to keep consistent and it gave them a lot of grief. Moreover, the art direction policy was to emphasize weight and mass. This required a greater-than-usual cel count and preventing mistakes in linework and coloring became exponentially more time-consuming.

Numerous delays meant animation wasn’t ready when voice-recording had to take place, so there were numerous times when mouth movements did not match the dialogue.

Naturally, the worst errors occurred during the photography; dirt, scratches, cels shot in the wrong order or at the wrong level, all of these were simple things that only caught the eye in the finished film. The number of scenes with special visual interest decreased after episode 3, and episodes 4 & 5 only featured one major scene apiece, the first space warp and the first firing of the wave-motion gun.

Still, Yamato was fascinating. As it progressed, powerful images gave way to powerful drama; the interchange between Kodai and Okita, the first blush of love between Kodai and Yuki, the pressure of life in an enclosed spaceship, Sanada’s dark past, Analyzer’s relationship with humans, all of these stories accumulated to make the series fully bloom. Episode 13 was probably the darkest of them all, when the image of Kodai as the hero was completely shattered and could no longer be taken for granted.

The charm of the middle stage

The central portion of the series is the most episodic. There is the steady background element of Mother Earth approaching extinction, but the foreground is a seesaw of duty vs. emotion during the most unstable time in the life of a youth. Every part of the series, the animation, design, characters, writing, etc., all supported each other. Every viewer could find something in it to turn them into a fan.

Female fans in particular were drawn to the characters, who were as diverse as the viewers themselves. A love for the overall series bonded everyone and a love for individual aspects that came out in these episodes made it an individual experience. This was the basis for a new generation of fans. 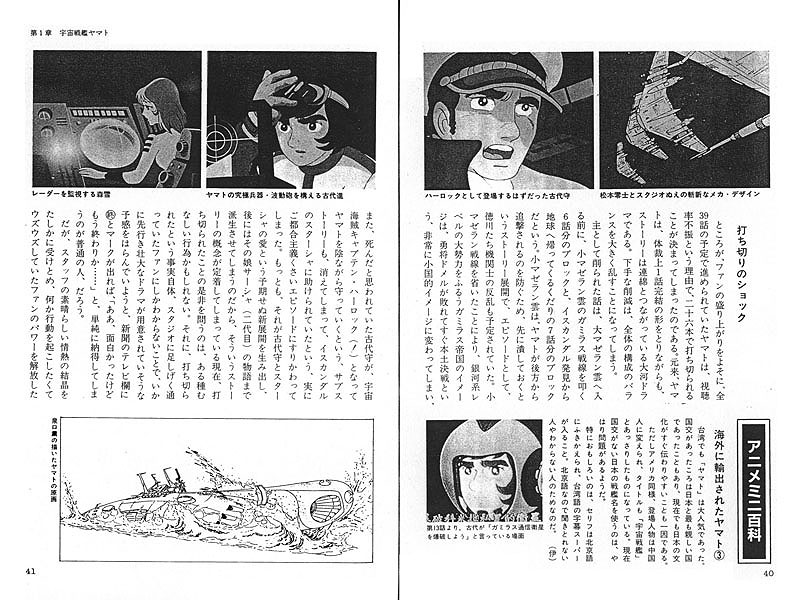 Despite the original announcement that Yamato would run for 39 episodes, everyone was shocked when sluggish ratings forced the series to end early. The strong momentum of the story collapsed when it suddenly came to a single-episode conclusion in episode 26, a move that threw the original plan completely out of balance.

The 13 episodes that were cut would have added more to the story before arriving at Iscandar. After passing Planet Balan in episode 20, the intention was for Yamato to change course and pass through the Small Magellanic cloud to avoid detection. Despite being conquerors of the Milky Way, the Gamilas had no front there, so it was safer than the direct route to the Large Magellanic Cloud.

The rebellion of the engineering crew was to happen during this time, along with more political intrigue among the Gamilas. This is also when Yamato‘s secret protector would have appeared, Mamoru Kodai in the guise of Captain Harlock. He was to intervene in the decisive battle against General Dommel and be revealed as an ally of Queen Starsha.

(Editor’s note: much of this material was preserved in the manga version by Keisuke Fujikawa and Akira Hio.)

It is pointless to debate the merits or deficits of these lost episodes now that the series is long over, but it calls into question the development of a growing love between Mamoru and Starsha that would later lead to the birth of their daughter Sasha as seen in The New Voyage.

In the end, the fact is that most people outside the studio knew nothing of these episodes. Despite the loss of such magnificent drama, the most anyone can say now is “it would have been interesting if…” and ordinary people might not be moved.

But the passion of the production staff had been passed directly on to the fans, whose anger over this move crystallized them to use their power in any way they could. Discouraged by the cancellation, the staff began to lose its enthusiasm and consigned the unproduced episodes to memory. But they did not let it affect their work. The climactic battle in the rainbow star cluster and the fall of Planet Gamilas were excellent episodes and matched the high standards of the first part of the series.

The fact that both Gamilas and Iscandar were dying planets like the Earth was a revelation. Gamilas had chosen to avoid this fate by invading others, and Iscandar had accepted its fate peacefully. What road should Earth take? It was a complex question upon which to conclude a story.

The final episode dealt with life and love, the questions at the core of our existence. Though it was a suitable way to end Yamato, could such a thing be depicted in anime? Was it a comment on the desperate efforts of the staff? It was a refreshing way to end a series.

Even after going out on such a high point, would all the hard work of the staff and the zeal of the fans fade away in the passage of time? How could all of this be properly commemorated and preserved?

My friend Ms. Kushino and I had the same answer to this as many others did. We would form a fan club and start making fanzines. (Editor’s note: this club was called the Cosmo Battleship Yamato Laboratory, or CBYL. Read about its founding here.) 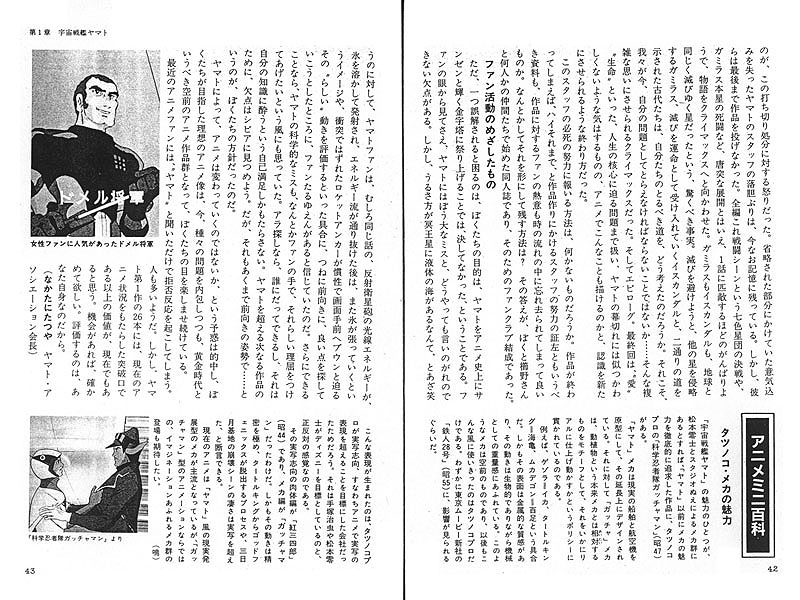 The Aim of Fan Activity

Our purpose was to build a monument to Yamato for all time, to ensure that it would be properly understood. But even viewed through the eyes of a fan, Yamato was not without its faults.

For example, I complained about the ridiculous idea of a liquid sea on Pluto but others argued that the discharge of the reflection satellite gun would melt the ice and make it that way. We also argued about the physics in the scene where the rocket anchor broke off in a collision (episode 9). But fans always look for the good points and keep faith in the cause. If we found a scientific mistake, we looked for a reason to justify it.

In the end, we became drunk on our own knowledge and it would lead us to judge the Next Big Thing very harshly. But it’s our policy to keep a positive attitude. Whether or not Yamato changed anime, it provides an ideal to be reached for, despite its problems. It represents an unprecedented golden age that will always shine in our eyes.

Recently, I’ve heard anime fans reject Yamato. Everyone sees things differently. But the first Yamato series is what brought anime to its present state. If you get the chance to confirm this for yourself, take it.