Many English-speaking fans who came to appreciate Space Battleship Yamato via Star Blazers probably still don’t realize what a truly monumental event Farewell to Yamato was when it hit theaters in August 1978. To us, it’s seen as an alternate version of the Comet Empire TV series. To Japanese fans at the time, the TV series was something that followed in the wake of the biggest, most powerful movie they’d ever seen.

Naturally, it was accompanied by the biggest anime merchandising campaign of the pre-Gundam era. Practically anything you needed in your daily life could be found with a Yamato label on it, not to mention a lot of things nobody actually needed but HAD TO HAVE just because it was related to that awesome movie.

The ‘Fancy Goods’ (read about the origin of that term here) were available in stores everywhere, but only some were offered to members of the official Yamato fan club. Yes, believe it or not, the extensive lineup shown here was only part of the onslaught. 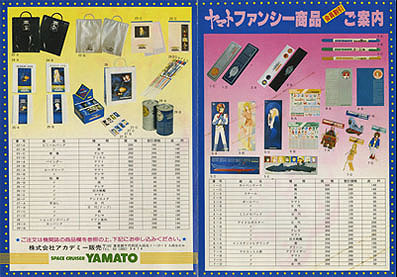 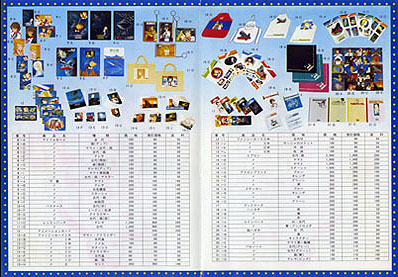 Since there was a 60-day wait between issues of the fan club magazine, Office Academy published this 2-sided product catalog to promote the Fancy Goods line 24/7. (Click on either of the images to see an enlargement.) Generally most products took the place of similar Space Battleship Yamato goods from phase 1, but the Farewell campaign was more focused and unified since it was assumed at the beginning that Yamato wouldn’t be coming back to life the following year. As a point of interest, look for an early example of “branding” graphics in these products; a triple stripe meant to mimic the crew stripes on Star Force uniforms.

Two styles of Address Memo were made, with the metal endpieces that could fit in your pocket and probably stop a bullet. 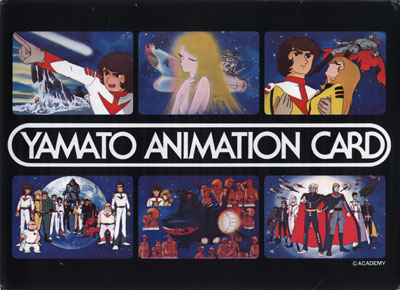 This set of six Animation Cards measured about 10″ x 7″ and was a sort of portfolio to be carried around and shared with friends. All the images were unique to this set, only appearing again on the 1979 Big Summer Roadshow movie program book and a smaller ‘Idol’ card. 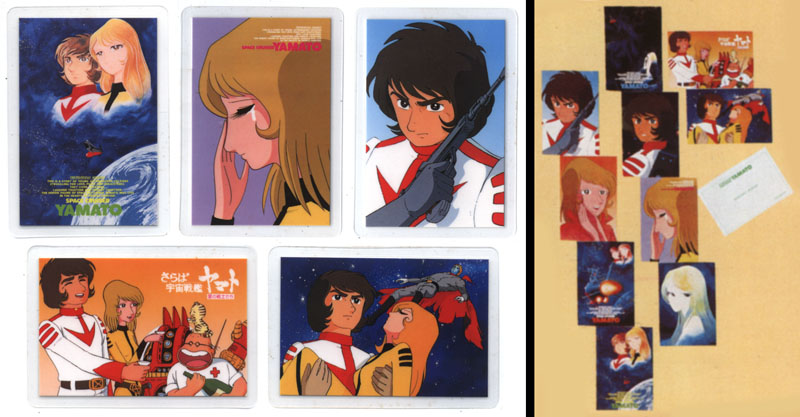 And what is an ‘Idol’ card, you may ask? Simply put, a laminated image of someone or something you idolize so much that you have to carry it around in your wallet. Most Yamato fans were probably too young to have pictures of their children, so a Yamato character could fill that role nicely.

With all the Farewell to Yamato merchandise there was to buy, a customized bag would be just the thing to carry around.
Options could be found in fabric (above), paper or vinyl (below).

Don’t forget about that school work, youngsters! Farewell was in theatres from August through October, just in time to fuel a wave of school supplies for the fall. First up, a line of pencils (above), erasers and pens (below). And that’s just the beginning. 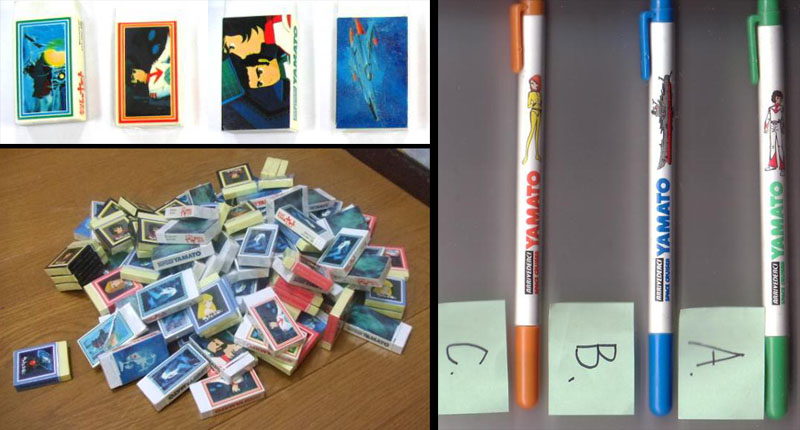 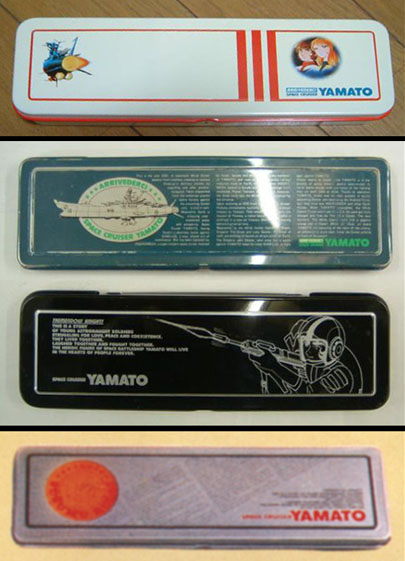 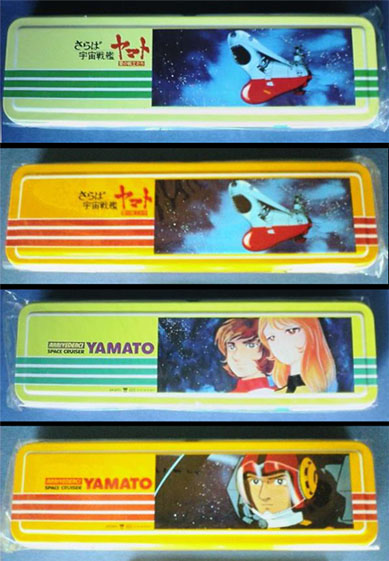 You can’t just be dropping your pens, pencils and erasers all over the place, so fortunately for you there’s a whole line of metal pencil cases to save you time and embarrassment. These were also probably capable of stopping bullets, but evidence has yet to surface.

There were also vinyl versions that probably left fewer marks if you carried them in your pocket.

You’d also need something to write on, and what could be better than a binder and some loose leaf paper to stock it with? Nothing, that’s what!

If you ever wanted to ‘pal around’ with friends from outer space, the Yamato “Pal Notebooks” were there for you. And when you got to the end of that homework chapter, there was a Yamato bookmark (at far right) ready to serve.

There were also the inescapable Shitajiki (pencil boards) to contend with, available in three different styles for all your pencil board needs. 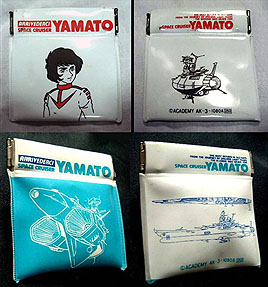 Of course, you couldn’t buy any of this stuff if you didn’t save your yen, and Yamato even had a solution for that with the two coin banks shown above. Once filled up, you’d pop it like a soda can, transfer your wealth to one of the Yamato coin pouches shown at right, and head off to the Yamato store for some well-earned gratification. Then repeat. 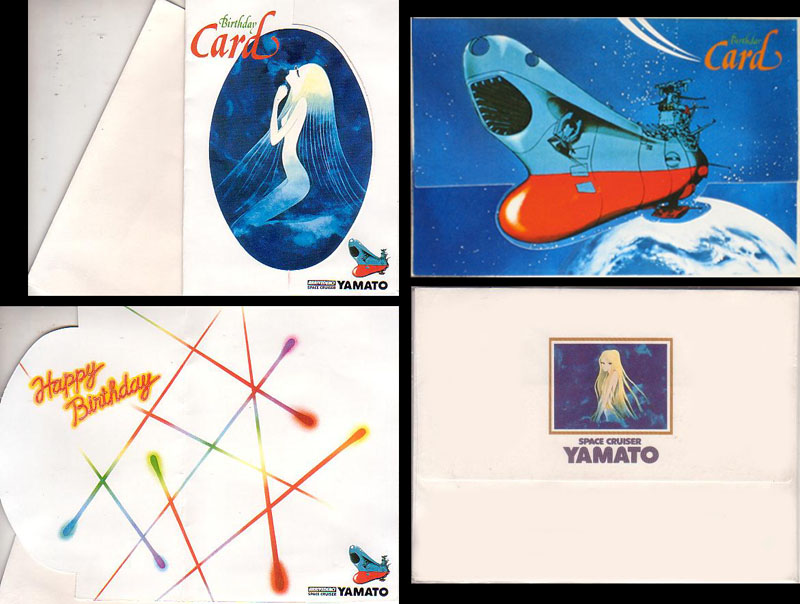 Farewell greeting cards didn’t have quite as much variety as their predecessors, but since they were
all still available anyway the new cards simply made it possible to wish someone a Yamato birthday.

With Yamato instant rettering, it was now possible to make your cards and retters look professionally rettered. After choosing the right retters (in either English or Japanese) you would burnish them on and choose a picture image for the finishing touch.

What’s the difference between stickers and seals? The animal kingdom notwithstanding?
Nothing, really. It was just another way of giving fans as many options as possible. 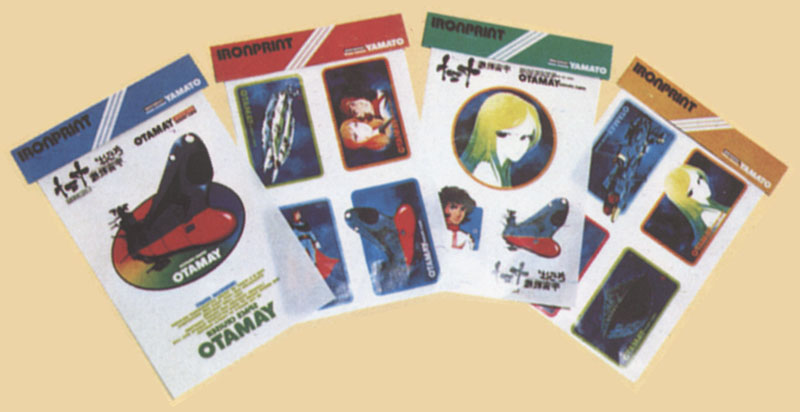 You might have heard about Space Cruiser Otamay, a little-known anime SF series from the 1970s and 80s. You could get iron-on images from this series, but if you accidentally applied them backward they would spell out Yamato. Don’t mix them up! 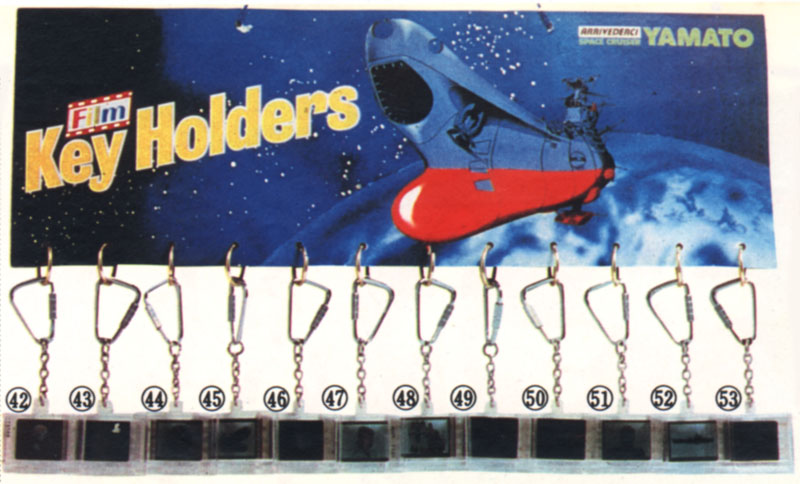 Everyone’s got at least one key, right? It stands to reason then that everyone would want at least one Yamato key ring for it. But if one wasn’t enough there were plenty to choose from. The line shown above had a frame of film contained in a plastic holder, while the larger style shown below was more like a credit card. Either way, you’d always be able to unlock the chain on your Yamato bicycle.

Back in the paper world, there was plenty more to keep you writing. For example, two styles of Yamato stationery,
one with a Kodai envelope and the other with Teresa.

And note pads! More than you could possibly need or imagine! There were the spiral mini-notes…

…and your standard pocket-size booklet for jotting down whatever hits you on the fly. Because it was probably a lot easier to get a girl’s phone number once she saw you were willing to deface valuable Yamato merchandise with it!

Still in the paper world there was the ‘Memory of Yamato’ Anime Book, a boxed set of 53 mini cards (6.5″ x 5″) with Series 1 images on one side and Farewell images on the other. These cards were cleverly repurposed as a prop-up desk calendar (below) with one card per week for all of 1979. This was just one of three ’79 Yamato calendars; see the other two here. 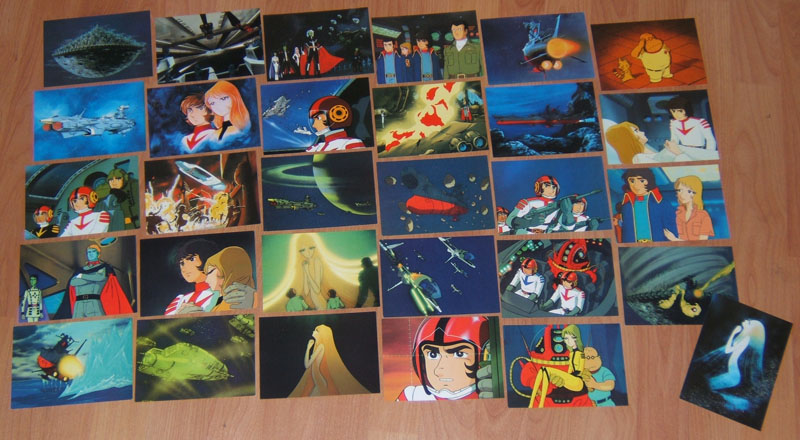 Also in the realm of cards there were the postal kind, a set of 30 (sold in packs of 5) to brighten up any mailbox
if a fan could actually bring him or herself to sacrifice one. Now THAT would be a test of friendship. 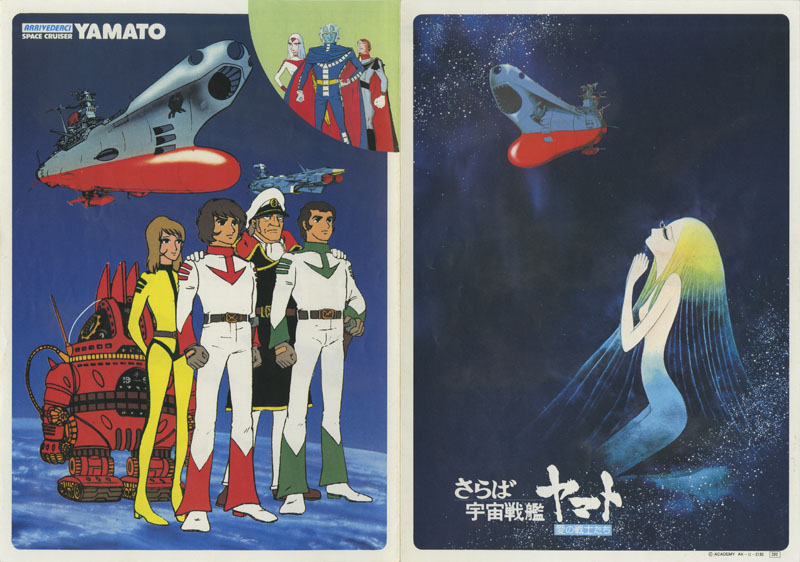 Another product that seems to have been unique to Japan (and probably still is) was the ‘clear file,’ a plastic sleeve to carry papers around. In and of itself, the sleeve was just transparent plastic. But if you were to slide in a pre-printed starter sheet, BANG! It’s a Yamato clear file! One such sheet is shown above and below, a 2-sided foldout to commemorate Farewell to Yamato. 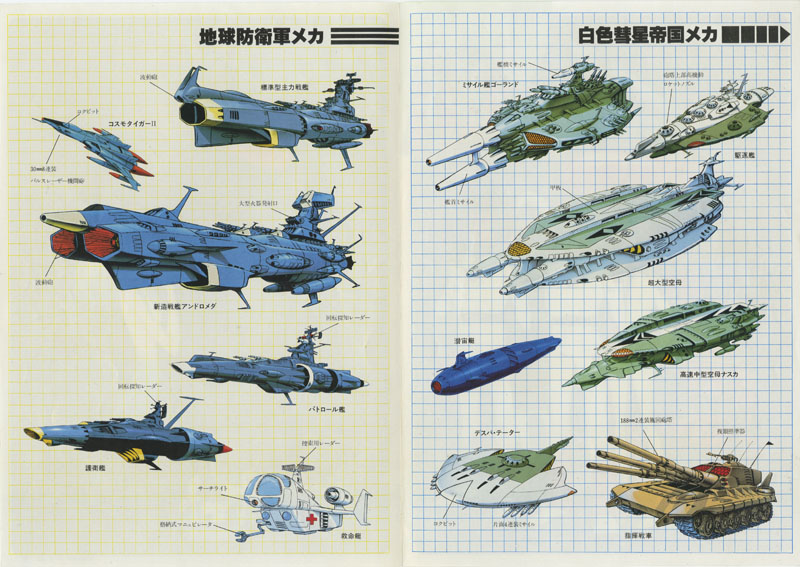 We’re not done with paper yet! Not until we cover the Yamato “Paper Clatch,” a sturdy cardboard envelope (in two styles) to lug your important papers back and forth to fan club meetings. Then there were the five different jumbo posters shown below, tall enough to cover a door or wide enough to fill a wall.

One of the more unusual bits of merchandising were these “Mascotte Dolls,” ready-made to dangle in a window or wherever else they were needed. Unfortunately, they were not articulated to sway or bobble. That would have probably been TOO much fun. 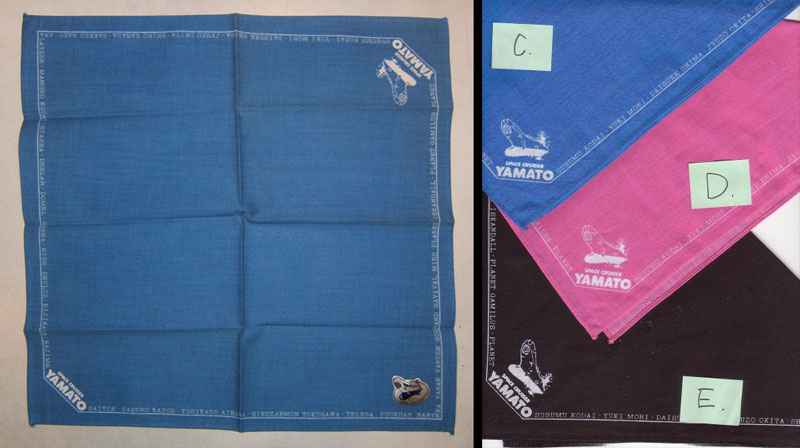 It goes without saying that the ending to Farewell was a real tearjerker. Yep, you saw it coming…more Yamato handkerchiefs! What made this style unique was its use of English character names around the entire border. It included romanizations seen nowhere else, such as ‘Zuohdar’ and ‘Analayzer.’ You remember them, don’t you? 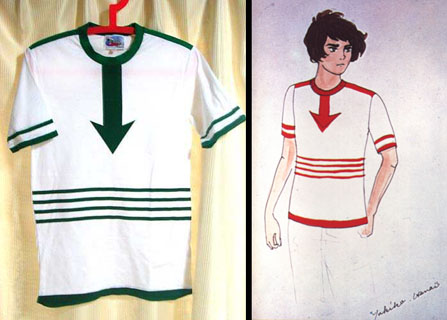 No merchandising campaign would be complete without some apparel, and these pseudo-crew t-shirts came with a special pedigree. The scribbling across the wrapper above left isn’t a mistake, it’s the signature of Yukiko Hanai, one of Japan’s top fashion designers in the 70s. She was commissioned to create costumes for Farewell, and designed Yuki’s pink jumpsuit seen in the early part of the movie. (Also in the TV Series 2.) Hanai also devised the crew shirt seen far right, which became the basis for these real-life versions in both Kodai and Shima colors.

We end our product review with the sole big-ticket item, a poster-sized “panel” clock that took the place of an earlier one designed for the first Yamato movie. It retailed for a hefty $135 and could be purchased in installment payments from Nippon General Credit (click here to see an enlargement of their ad), which also handled the high-priced Yamato hardcover books in the same fashion. 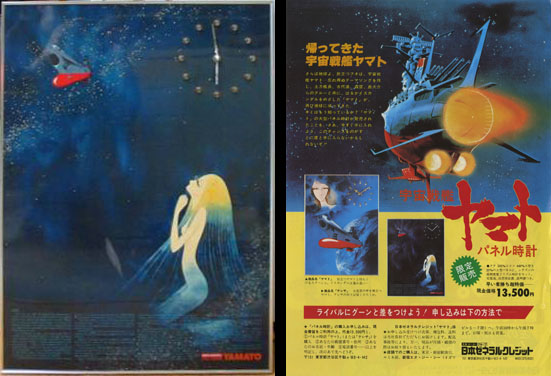 Wherever there were fans ready to buy, Office Academy found a way to let them do it!