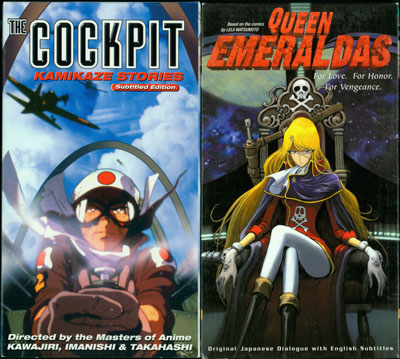 For loyal fans of Leiji Matsumoto’s works, a true renaissance arrived in the year 1993 with the release of a three-episode home video series called The Cockpit. Based on stories from Matsumoto’s critically-acclaimed World War II Battlefield manga series, it brought the master’s work back to anime after an eight-year hiatus with a fresh new visual style.

This was largely due to character designer Toshihiro Kawamoto, justly famous for other anime productions such as Gundam 0083, Golden Boy, and Cowboy Bebop. Kawamoto is a deft chameleon of an artist, able to meld his style invisibly with others and find an enormously appealing fusion. With The Cockpit, he found ways of turning the peculiarities of the Matsumoto style into unique strengths. (The Cockpit was later imported to the US by Urban Vision and belongs in the collection of every serious anime fan. Kawamoto showed his skill again in 1998 with a series of Matsumoto-style artwork for several Yamato video sleeves.)

What does this have to do with Keisuke Masunaga? He was the next artist to take up the same challenge. As the character designer for 1998’s Queen Emeraldas OAV series (later imported to the US by ADV Films), he took the baton from Kawamoto and pushed the Matsumoto style even farther, redefining it for a new generation. This put Masunaga in an ideal position to bring the same magic to the Yamato Playstation games, as he describes in these interview highlights from the first Fixed Data book. (Studio DNA Media Books, May 2000) 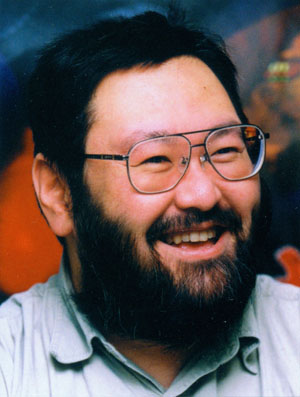 The Greatest Opportunity Came With the Worst Timing

Interviewer: How did you first get the Yamato job offer?

Masunaga: Mr. Maeta, the president of Studio Peacock, heard about the project from the game producer and took the trouble to introduce me. I got the audition because of that. Also, before that I worked on the Queen Emeraldas OAV, which was by Leiji Matsumoto. That wasn’t a connection, but some might call it a coincidence. However, the greatest opportunity came with the worst timing. The schedule was already “on fire.”

Interviewer: The original schedule was already past.

Masunaga: The fires were burning their hottest by then. Normally, I draw several images for an audition, but it was no longer possible. I said, “give me an hour to draw,” and I started drawing on the spot. 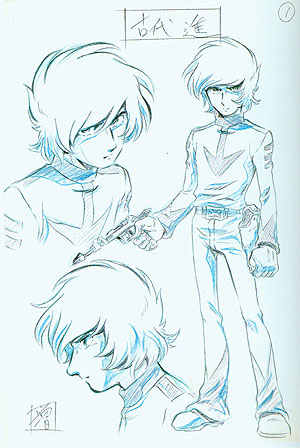 Afterward, I heard that the original concept for the Yamato Playstation game was to design it in a sharp, contemporary anime style. I thought that would make it completely different from Leiji Matsumoto’s art, and different from the pictures I drew. But I hadn’t heard that at the time I did my tryout. Maybe that was for the best! (Laughs)

I heard about that concept before the result of my audition came in and said, “ah, I drew the opposite of that.” So I thought my audition was going to be a failure.

Interviewer: After you entered the scene the concept changed 180 degrees.

Masunaga: It seems so. Afterwards, I met with the game producer and staff. I said, “I heard there was another concept, why did you go with the Matsumoto style?” I wanted to find out. They said they were about to turn it into a contemporary anime project, but when they saw my pictures they thought it might be more refreshing. That was their answer.

I think they were worried about the project at the time and were probably ambiguous about the original idea. Therefore, I guess it was overturned. However, I think pushing the design style of Leiji Matsumoto forward in all aspects is the correct answer. If Yamato were changed into a modern anime like the change to a trendy hair color, maybe the old fans would…well, I’m a fan, too, so I might have thought it was crap. But if all you want is to bring in new people, you don’t worry about things like that.

Interviewer: When work starts, do you follow the orders of the other party?

Masunaga: Yes. I did a little cartoony drawing for the audition, so it wasn’t much. But since a game makes characters out of polygons, I had to shift it a bit. With Yuki, for example, I drew her on the slender side at first, but they said to add a little more meat to her.

I wanted to see how to reproduce the physical presence of a human being in polygons. Now I know that there is no need to strictly match the polygons, but in the beginning I thought it was. The first thing I learned was that Mr. Matsumoto’s beautiful women are particularly slender, so it’s difficult to show their good points with a coarse polygon. 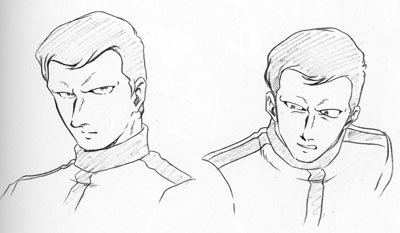 Interviewer: I’m a bit worried by this design for Sanada.

Masunaga: Really? I haven’t abandoned my ambition. In Leiji Matsumoto’s Battlefield manga series, their were few characters with crew cuts or shaven heads. Even his short-haired characters had unruly hair. Mr. Matsumoto’s original design for Sanada had longer hair. At least, it wasn’t a crew cut. I held out for it, but the old anime image is strong, so it was rejected after we talked about it. It’s a dead issue now.

Masunaga: In the next story [Farewell to Yamato] he has a crew cut, but in the next one after that he has to bring up a child [Sasha], so maybe his hair grows out a bit. It would have a more gentle feeling. It’s hard to draw the crew cut for some reason.

Masunaga: It would have to be Captain Okita. He demands to be drawn properly. There is the scene where the ship finally reaches Iscandar and he broadcasts his “thank you” to all the members of the crew. Other than that one scene, I personally drew every picture of Captain Okita that appears in the game. 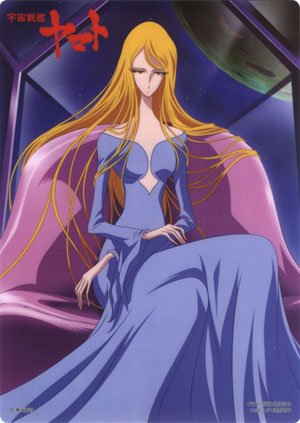 After that, it would be Starsha. I’m not accustomed to drawing her, so it was difficult. I started on her right from the beginning.

Interviewer: Matsumoto actually drew her in the TV series.

Masunaga. Certainly, even though it was just for a few scenes. He drew scenes of Starsha and Sasha himself because the staff at the time couldn’t draw a beautiful Matsumoto woman. That’s what I was told. His particular nuances can’t be copied easily.

Interviewer: It takes a Matsumoto freak to draw Matsumoto characters.

Masunaga: Yes. And the Galaxy Express movie had an impact, too. That was one of my favorites at the time. I was in the generation whom it hit directly.

Masunaga: I’m 34, soon to be 35. I was in the second or third grade when Yamato started. The Leiji Matsumoto boom was at its peak during my adolescence.

Interviewer: Were you devoted more to comics or animation then?

Masunaga: I particularly liked comics, especially Matsumoto’s manga. Some of them are a little hard to read now when I look back.

Interviewer: Yamato and Otoko Oidon [Oidon Man] were the ones that really caught on.

Masunaga: Yes, but I didn’t catch Yamato‘s first broadcast from the beginning. The first episode I saw was #24 [Desperate Struggle! God, Weep for the Gamilas!]. For some reason, I never turned the channel before then. Yamato had flown into the inner shell of Gamilas and left it in ruins. When Yamato flew back out into space, I thought it was a strange story. I remember thinking in my childish mind, “why would a heavy battleship float off the surface like that?”

I tuned in the following week for the beautiful episode 25 and all my criticism vanished. Then I saw the final episode and forgot everything else from my past. I watched all the reruns after that and my whole life was derailed. I followed Yamato for a long time, and continued to see the other anime that came from Leiji Matsumoto. Then I got to work on them, so I’m not completely derailed anymore. (Laughs) 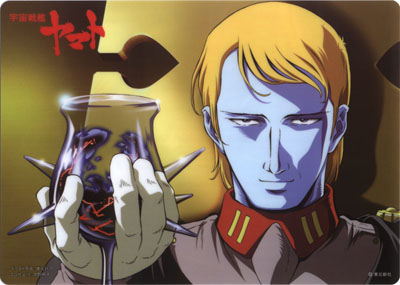 The Ideal Animator is Kazuo Komatsubara

Interviewer: Did that influence your work?

Masunaga: Yes. I was impacted in a big way when I watched the first episode of Space Pirate Captain Harlock. I wondered if the feeling of Leiji Matsumoto’s work could be reproduced in an anime, and I was really surprised to see it done for Harlock.

I said, “The pictures look just like Matsumoto! Is this anime?” I was shocked to learn that the character design was by Kazuo Komatsubara, so after that I was inclined to like his work. I thought it was possible to do work like this, and also like Yamato. So I guess for me, Matsumoto and Komatsubara both had a great impact on my drawing.

[Editor’s note: little known to American fans, Komatsubara (1943-2000) was nevertheless a legend in the Japanese animation community. A highly accomplished artist, his ability to adapt to practically any style endeared him equally to such disparate superstars as Go Nagai and Hayao Miyazaki. He played a pivotal role in redefining the Matsumoto style for anime, exactly as Toshihiro Kawamoto did in later years.]

Interviewer: The game version of Eternal Story of Jura felt very much like the work of Leiji Matsumoto…

Masunaga: I really wanted to do that story. The first time I read the manga, I thought, “make this into anime!” I thought that would be cool. Okita was confronted by the ghosts of his dead crew, and he apologized to them. He asked them to wait a bit longer for Yamato to get the Cosmo Cleaner D, then he would join them in hell. I wanted to make that as an OAV or something. Bandai Visual should do that.

What to Expect for Yamato in the Future

Interviewer: Please tell me what you want to do now.

Masunaga: I want to try and make a Yamato anime that includes some original elements from the game. The first game felt like it was done in a hurry. I wasn’t able to grasp the whole of its content because I worked on it for such a short time. But with the Farewell game, I can at least participate from the beginning.

Interviewer: That’s a dream come true for a Matsumoto freak.

Masunaga: Yes, and I can give it my full attention as a Yamato freak.

Interviewer: Will you still have Yamamoto’s [Hardy’s] elbow pop out of the Cosmo Tiger cockpit when he gives his final salute?

Masunaga: That’s why he crashed! (Laughs) He didn’t give the Yamato salute, with his fist over his heart. There are things like that I was dissatisfied with, and I want to improve them. But it’s bad of me to interfere in too many ways.

Interviewer: Excuse me now, I’d like to render a proper salute.

Masunaga: Can I take a picture? Don’t be shy. I’ll draw an arrow on your clothes! (Big laughter)

Continue to the Kazutaka Miyatake interview

Final note: Keisuke Masunaga’s work on the Yamato Playstation games earned him other opportunities, such as a series of Yamato lithographs for Japanese retailer Anime World Star (all shown on this page) and the character design slot on the Galaxy Railways TV series.