Japan’s Amada Printing Co. was another early entrant into the licensing brotherhood, collaborating with the Nomura Toy company to make mini gum-rubber toys and rolling out collectible card sets of its own. Shown here is their first “Mini Card” set, dedicated to Yamato Part 1. This was actually a re-release of mini-cards that first appeared with the TV series in December 1974 and were reprinted as part of the movie rush. Those who bought a complete box got a new 20-page “Card Program” booklet (shown above right) measuring 6″ x 8.5″ that told the story of the first 11 TV episodes.

Amada made Mini Card sets for many anime and live action TV programs, and they all followed the same format: 2″ x 2.5″ cards issued by the hundreds to drive collectors crazy and a variety of 3″ x 5.5″ pocket books to keep them in. Pictured above left are 5 of the 7 known pocket books (some shown front and back), along with a small number of the cards for ‘Yamato Part 1.’

Amada also made these Menko Cards, part of a card-game tradition going back centuries in Japan. The rules are similar to marbles, only with cards being flipped against other cards. There were also some bootlegged Yamato Menko Cards, which can be seen here

Kids who collected mini cards and played Menko might also have liked these two 550-piece jigsaw puzzles from the Apollo Company.

Moving up the age ladder, we find Apollo’s Real Painting Set, which gave fans a chance to color in a set of eight Yamato images that were printed in either 2-color or black and white on cardboard. Click here to see a gallery of the entire set.

This cel was part of a different kit released in 1980 called the Space Battleship Yamato Cel Painting Set, which included images from later films. See the entire set here. Such kits became increasingly common as the craft of making anime began to capture the popular imagination.

Note books and note pads were a quick and easy product to make and came in several varieties. These four each measured 7″ x 10″ like others that were available through the official Yamato fan club.

A line of smaller note pads was also released. These measured 3.5″ x 5″ and came in several colors.

Finishing out the paper world, there were two sets of animation stills that were shipped out to magazine and newspaper
publishers everywhere. The set shown below was issued by Toei, the distributor of the Yamato movie. 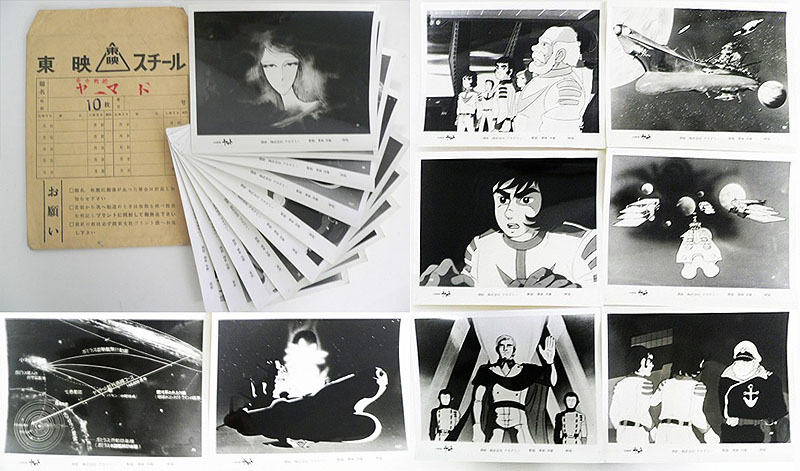 Personal items were easy to find, starting with one of the strangest picks; a set of tiny, non-functioning cigarette lighters. The Starsha model is shown here at about actual size. The pencases at right were the first of many personal products made by the Doi company, who also produced the plates shown on the previous page.

Doi also made several of these wallets and pass cases; the stitching and rounded picture windows were a common design trait.

This apron was another entry from Doi, a good match for three others that were available from the official fan club.

The last items we have from Doi are the metal buttons shown above left.
The plastic lapel pins above right came from another group called ‘Cosmo’ and covered both Yamato and Farewell.

Teinen also provided two ways for Yamato to keep your drinks cold with the thermos shown above left
and the irresistibly-named “New Handy Mate” above right.

If you needed something else to haul your Yamato loot around in, this pair of vinyl bags was up to the task. The one shown above left came from Columbia Records, and was designed to hold their enormous 13-LP drama album set for the first TV series. 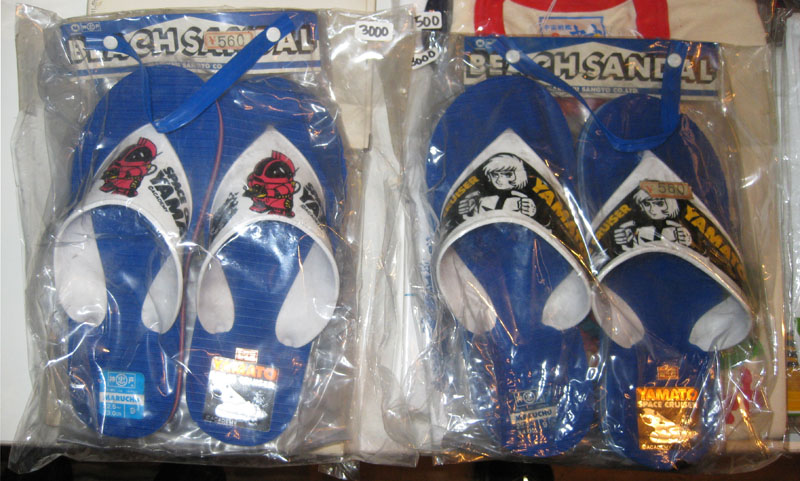 Hauling stuff around was a lot easier with something on your feet, so the Maruchu company provided a pair of Yamato beach sandals. It must have been a great comfort to look down at your toes and see either Analyzer or Kodai (or a mix if you preferred) looking back.

By this time you might be wondering if Japan was hip to the fact that merchandising campaigns were nothing without apparel, and here’s your answer. This may have been the first Yamato shirt of any kind, but the nature of such a thing is that it can easily slip through the cracks of history. Full-fledged Yamato apparel like this was actually pretty rare in the production years, and didn’t get real energy behind it until 2009 with the release of Yamato Resurrection. But that, as they say, is another story. (Told here.)

Another option was to make your own Yamato apparel with this no-nonsense “iron print” applied to the clothing of your choice. (shown “normal” and “flopped” for your convenience.)

For the fans with a knack for tailoring, there was even a bolt of cloth from the JCC Company, preprinted with Yamato art that was ideal for the making of the coolest kimono on Mother Earth.

This one’s a real oddball, and not easily sourced due to nonexistent information. These miniature erasers called “polyheads” capture Okita, Kodai, and Yuki but the maker and exact year is unknown. They could be bootlegged merchandise, or could actually be derived from Farewell to Yamato, which had more products of this nature.

Until more data can be found, they’ll sit right here. Taunting us.

Finally, we have a pair of logo stickers. The upper-left one was a glittery iron-on given away as a premium by Columbia Music Co., while the lower one’s job was simply to be exciting. At right we have a 2-frame film clip released by an unknown party for an unknown purpose. Things like this were common giveaways at screenings or other events, and could be used for bookmarks or whatever else one needed. The attribution is generic, but the images are probably from Farewell to Yamato, which is the next stop on our collectibles tour–and pack your scuba gear, because we’re headed into deep water!

Continue to Farewell to Yamato