The Farewell to Yamato movie was one of those rising tides you hear about that lifted all boats when it hit Japanese cinemas in August 1978. No boat was lifted higher than that of Yamato 2, which premiered on TV two months later and was essentially a 26-episode expansion of the story. Thus, many of the products already on the market became supportive of both.

The number of products actually labeled for Yamato 2 was quite small, as seen below. But the overall quantity increased during its broadcast thanks to the involvement of two dedicated sponsors: Nomura Toy Company and Ezaki Glico, Japan’s biggest confectioner. Nomura’s lineup can be seen here, and Glico’s can be found further down this page. First we’ll attend to the stuff that actually said Yamato 2 on it…

The Sanko Toki [Three Happiness] Ceramics Co. had made children’s dishware way back in 1974 to tie in the original TV series (see it here), and returned to the fold with this Yamato 2 set. 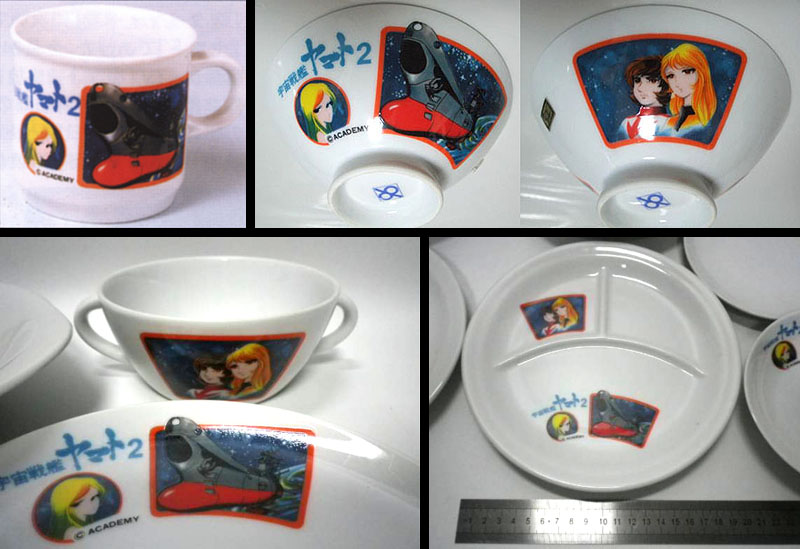 Keeping little feet dry during the winter months would have been no problem with these luxuriously-embossed Yamato 2 boots. The tooling on these is amazingly good for a children’s product, and it must have been bracing to know Zordar was raging at the weather on your behalf.

Yamato 2 was a big enough deal to get the attention of Japan’s mainstream entertainment media in the wake of Farewell to Yamato‘s boffo box office in 1978. As a case in point, here’s an article from the fall ’78 issue of Talk of TV Magazine, which included a free iron-on (at right).

The Yomiuri TV network released a Yamato 2 poster to promote the broadcast of the show, and Office Academy turned it into the digital wall clock shown here. It measured about 20″ x 14″ and was released in September 1978, just a few days before the premiere.

Another Yomiuri promotional item was this do-it-yourself pencil cup with a calendar on one side.
Its means of distribution is unknown, but it was probably a bonus item in a magazine like Talk of TV. 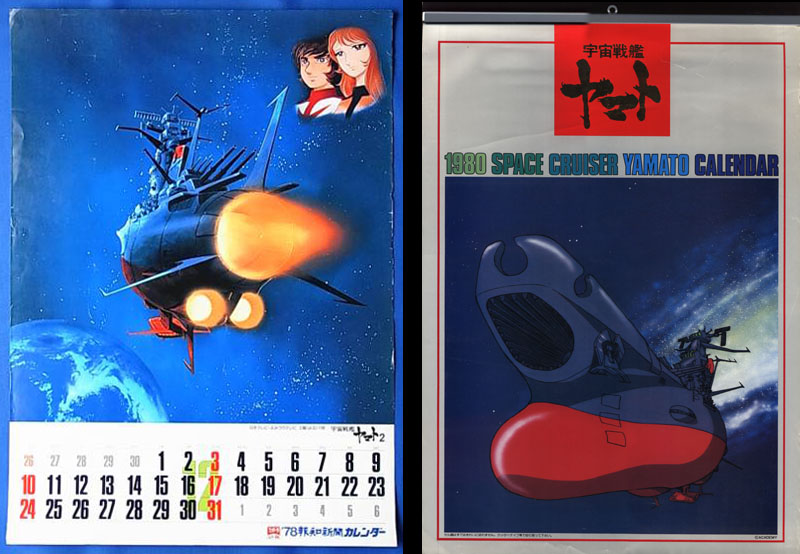 Fans in search of bigger Yamato 2 calendars had a couple of options. The first (above left) borrowed the movie poster art from Farewell to Yamato and only covered the month of December 1978, but it was a start (the source for this item is unclear; it could have been part of a larger Yomiuri TV calendar). The following year, a 1980 calendar could be purchased that contained some new artwork from the series, all of which can be viewed in our Series 2 gallery. 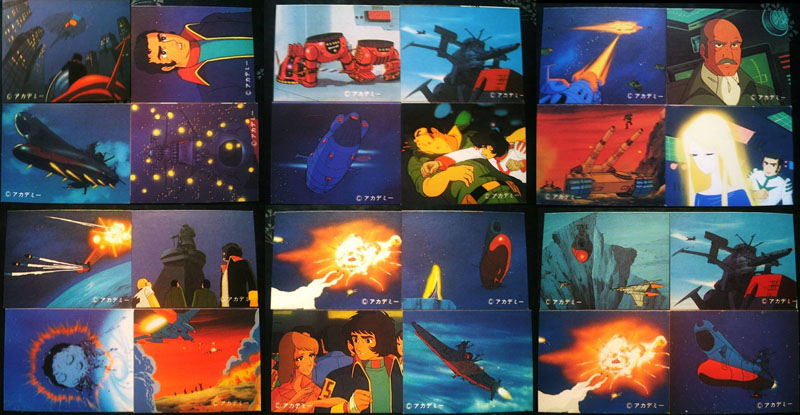 The Amada Printing Co. was still going great guns with their various products during Yamato 2, and released another wave of their mini-cards in February 1979. This set devoted another 120 cards to the TV series, which fit the standard Amada pocket book holders. (Back up to this page to see previous sets.)

Jumping ahead for a moment, we have Amada’s “Collection Card” set 4, devoted to The New Voyage. Once again, they were stickers rather than cards, and came with their own display book (below). The numbering picked up from the three Farewell sets and added another 100 images, bringing the total to 460.

You might be asking why this isn’t being shown on a page devoted to New Voyage collectibles, and the simple answer is that there isn’t one. Believe it or not, this is the one and only piece of collectible merchandising (other than books and records) for that entire film. Why? Probably because store shelves were still teetering under the weight of the Farewell to Yamato campaign. Sometimes it takes a long time to say farewell. 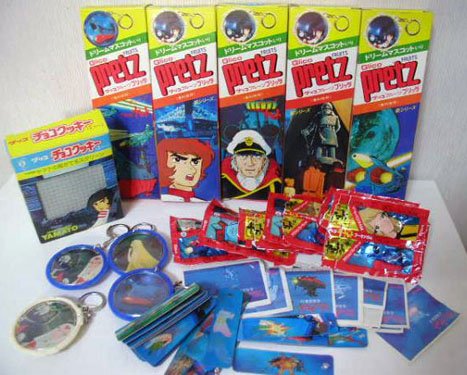 The primary reason for Yamato‘s smash success was the simple fact that it told a great story. But many other factors combined to make it the biggest thing Japanese pop culture had ever seen–including chocolate and bubblegum. In the battle for constant visibility, there were few allies more powerful than the Ezaki Glico confectionary company.

Dating all the way back to the early 1900s, their products are found on snack shelves around the world (look for Pocky in your local supermarket) and they were practically a monopoly in Japan during the time Yamato hit its peak; they had only tepid competition from Lotte, a candy company that had originally sponsored the first Yamato TV series, and Kabaya Foods Corporation which got into the anime licensing game in 1979.

Glico had a huge impact in the mid-70s with inexpensive tie-in products for Japanese idol stars, and they made the jump into anime licensing in October 1978 with Yamato 2 as one of its first properties.

They struck gold with the same types of products that had been long been advertised in girl’s magazines, various accessories and stationery items grouped into a category called ‘Fancy Goods.’ There were plenty of these for Yamato collectors, too. Glico products with a Yamato tie-in were very popular with children and were produced in great variety, using images from Farewell and Yamato 2 in all sorts of creative ways, as demonstrated in the gallery below… 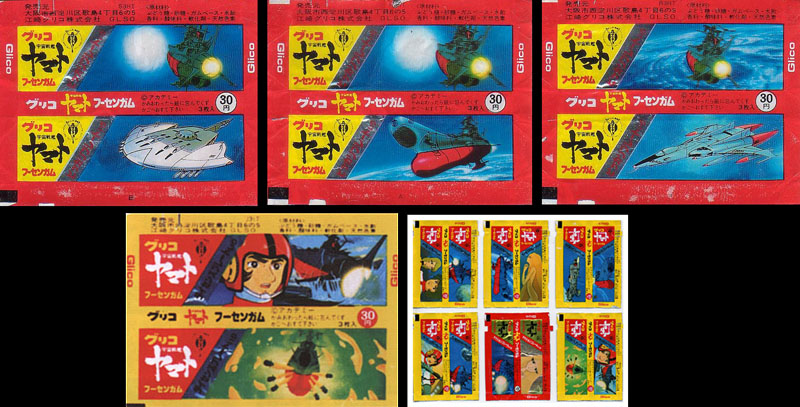 Sticks of Glico’s Yamato bubblegum came in these wrappers, and for a stretch of months in 1978 and 1979, they also contained bonus items…

The first wave in the red wrappers contained plastic “pikari [shiny] plates,” released in 1978. They featured a raised character or mecha image painted gold or silver and could be added to a keychain or stuck to something via an adhesive strip on the back. See more of these here.

The yellow wrappers indicated a cardboard “license plate” inside. Released in February 1979, they had a rock/paper/scissors game on the back. See more of these here. 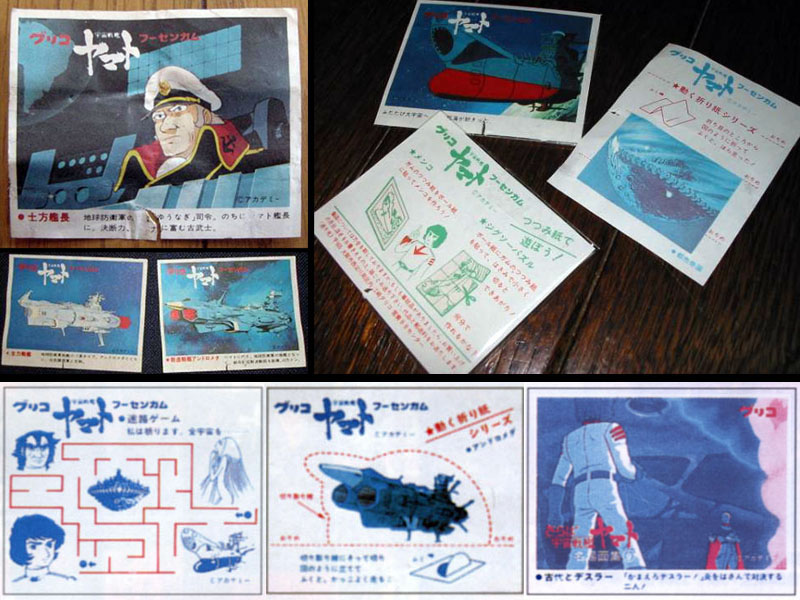 Each stick also included a 3.3″ x 3.7″ insert with different features. The license plates came with color stills, one of four different maze games, or mini popup displays that could be blown around on a flat surface. The pikari plates came with 2-color story images like the one shown above right.

These “action plates” came with the third wave of bubblegum, circa May 1979. They featured 2-step lenticular images. See more of these here.

“Choco Glico” was another favorite, a box of ten chocolate drops with another small box attached. In this case, the extra box contained a “badge,” the localized term for a lapel pin.

The badges came in two styles; the first wave was a plastic “relief” type with a raised image released in February 1979…

…and the second was a “die cut” style with a reflective coating.

Keychains (or “mascots” in the local parlance) were also a common Glico item. The first wave of metal mascots appeared in fall 1978, each about 1.5″ across.

The second style, which appeared in late 1978, came with Glico’s “Fruit Pretz,” a fruit-filled pretzel, and had a raised image painted gold on clear blue plastic. The largest measured about 2″ x 1.5″

Another style was the “dream mascot” (above left) which contained a cameo image, and yet another was reflective. The “action seals” shown above right were stickers with more lenticular images.

Snack cakes such as “Choco Rolls” and “Choco Cookies” came with a variety of items, starting with these “mirror calendars” with characters and mecha printed on a clear cel layer against a foil backing.

Also to be had were cardboard coasters like the one shown upper left and large-format
color slides (4.3″ x 4.9″) to be viewed against a light source. 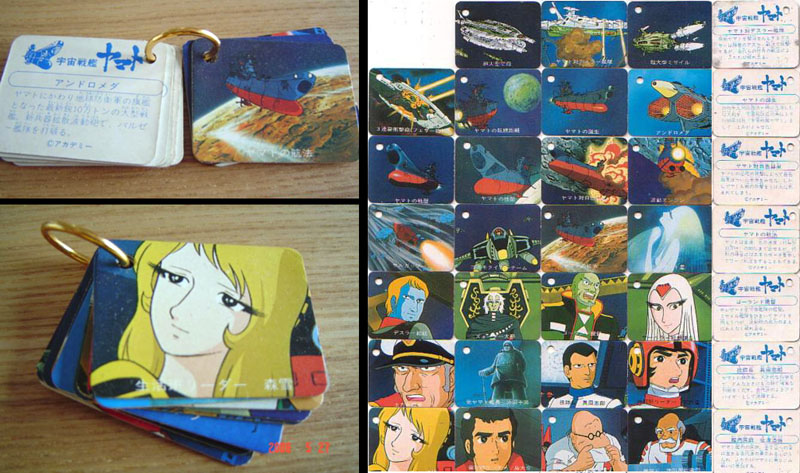 Another collectible item was a set of “ring cards” measuring 1.3″ x 1.7″ that could be kept on a single metal ring.

If you bought enough goodies to qualify, Glico even provided stores with two styles of paper bag (about 6 inches square) to tote them all home.

The “Fruits Roll” was another popular snack; this one promotes a “pikari film calendar,” not pictured. There were a couple of other bag styles as well, a paper lunchsack (center) and a plastic sealable version for Glico’s “Almond Chocolate.” Hungry yet?

Here’s a look at some creative packaging. Above left are three boxes that once held almond candies. The main surface was a transparent window with spaceship art and the interior was covered with a backdrop that would be revealed as the candy was eaten. The end product was essentially a shadow box with a Yamato space scene. Also pictured here is a small handbag, some more paper bags, and another pair of coasters.

Hand-held fans? Nope. These papers were once wrapped around Glico’s “Caprico Choco” snacks; chocolate contained in edible cones. These are pretty rare today, so peeling them off was probably not worth the effort for most consumers.

The company wasn’t only about food items, though, as this Yamato kite will attest. The sales method of such items is unclear; there could have been dedicated Glico displays in stores, or such items could have been exclusively available through mail-order campaigns. Regardless, there were plenty more. 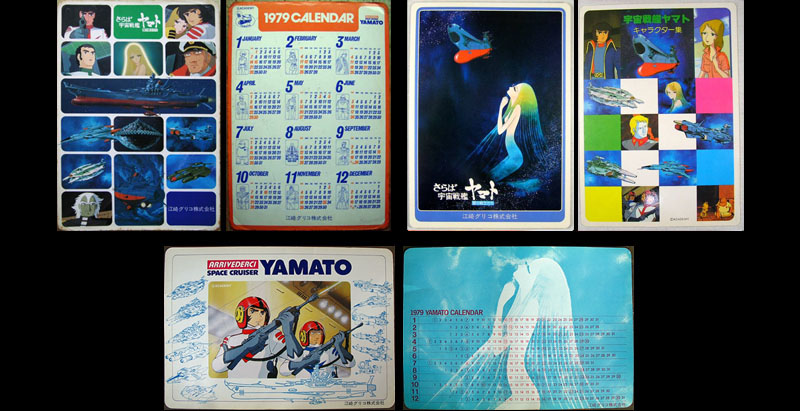 Cardboard pencil boards were quick and easy to make, and Glico pumped out five of them (all shown front and back). The one shown at the lower right had a science lesson on the back that examined different travel times from the Earth to the Moon or to the Sun. According to this handy reference, Yuki would take 10 years to walk to the moon whereas a jet liner could fly there in 20 months and a Saturn V Rocket could make it in 15 hours. On the other hand, Kodai could walk to the sun in 4,000 years, a jet liner could fly it in 20 and a Saturn V could get there in 250 months. You’re welcome.

See an enlargement of that board here.

Also easy to make: heavy cardboard hand fans. And wherever you have a blank surface in Japan, something has to fill it.

Glico also made something for the “what the” category: this “Space Panorama Jumbo Map,” a big sheet a plastic that appears to have served no purpose other than to give cutout characters something to lie on. 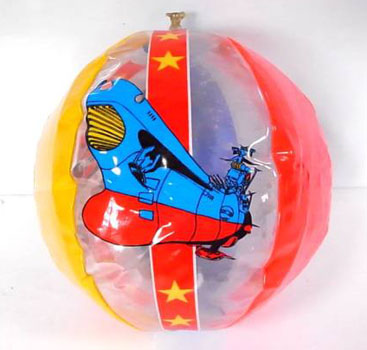 Whatever the Jumbo Map was meant for, it was most likely obtained by mail-order through some sort of promotion. The poster shown above right was the same size, but had the more obvious purpose of promoting Glico Ice Cream.

And while eating that ice cream, perhaps on a beach somewhere, you could also entertain yourself with Glico’s inflatable Yamato mini beach ball (at right). They really did have all these things covered.

Continue to Be Forever Yamato collectibles

The mighty Glico man towers over pedestrians in Osaka, Japan (photo taken in 2009). 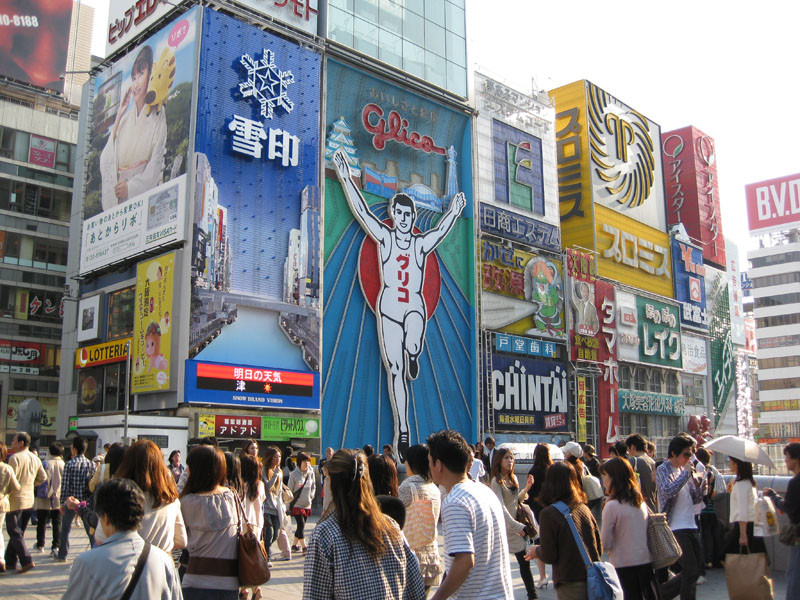