By now, most English-speaking fans know the biggest names behind the first Space Battleship Yamato TV series. Yoshinobu Nishizaki was the head. Leiji Matsumoto was the heart. Noboru Ishiguro was the muscle. Some know who the writers were: Eiichi Yamamoto, Aritsune Toyota, and Keisuke Fujikawa. After that, it’s mostly a blank. 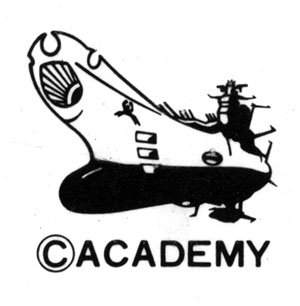 Not so in Japan.

In a very real sense, Office Academy Studio was an academy for the entire anime industry. Making Yamato was a transformative experience for all involved, pushing them beyond their limits and training them for prosperous careers. In the anime boom that followed, practically every high-profile production had a Yamato veteran in it somewhere, often at or near the top. So it’s time to fill in a decades-long gap and make more of their names known to the English-speaking world. After all, they’re the ones who actually did the work we see on the screen.

The animation was created both at Office Academy and by subcontractors; five rotating studios along with smaller shops and individual freelancers. One group, Studio JA, fell out of the rotation during the first half of the series, leaving four. The number went back up to five when a new team named Anime Room joined up later.

Physical production was initially supervised by Mr. Nobuhiro Okaseko, but his health was aggravated by the intense schedule, and he had to step down as supervising director just after episode 1 went into production. This did two things: gave a “battlefield promotion” to Noboru Ishiguro and released some of the restraints on the animators, allowing their personal styles to emerge. The result was a variety of approaches that supported and accented each other, giving each group its own artistic quirks and making Space Battleship Yamato into a true collective effort.

The first two episodes functioned as a training ground for many animators who subsequently brought their studios into the fold or formed new ones. Numerous freelancers without a formal studio affiliation were also enlisted as needed to meet the deadlines, but the five main studios were organized as follows… (Note: “Pro” is industry shorthand for “Productions”) 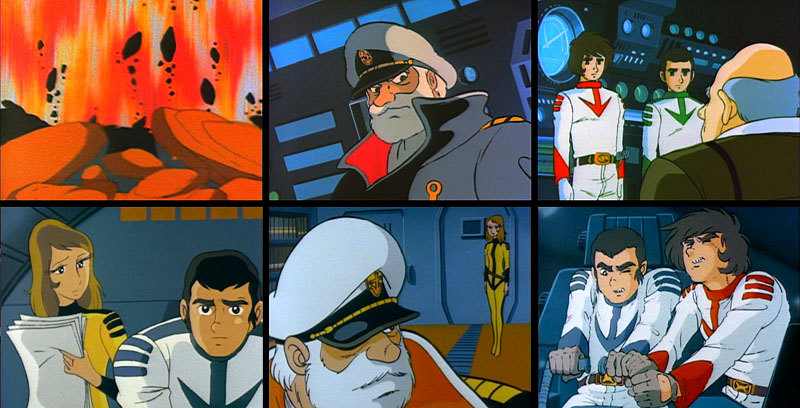 This was Office Academy’s in-house group that animated the pilot film and took charge of episode 1. The staff of 14 divided into two groups after that and dealt with a total of 9 episodes. The group had previously earned Yoshinobu Nishizaki’s respect on his 1973 series Wansa-kun, so he wanted to work with them again on Yamato. They inherited the soft and clean style of Osamu Tezuka’s manga during their time at Mushi Pro, Tezuka’s home studio. The bankruptcy of Mushi Pro freed up some of the other team members to form their own group called Studio Ventilation Ship, which was absorbed by Academy when Yamato started in earnest.

Mr. Okaseko was a veteran of Toei Animation, Mushi Pro, BEF Pro, and TV Tokyo. The general impression is that he set the artistic standard for Yamato even though he was hospitalized during the production of episode 1. He was responsible for much of the final character design, and his scene staging gave a great impression of power; he animated the planet bomb detonation for the pilot film, which was kept intact for the series. After the breakup of Muscle Company, he returned to work on episodes 16, 19, and 25.

Ashida and Ogawa were also experienced supervisors. Toyoo Ashida had worked on Moomin prior to Wansa-kun and also spent some time at Mushi Pro. He was almost single-handedly responsible for the animation in Yamato‘s 8th episode. He later directed several episodes of Yamato III, then became a very popular director/designer in the 1980s with a wide-ranging resume that included Fist of the North Star, Vampire Hunter D, Dr. Slump and Galaxy Drifter Vifam. Read our tribute to him here. 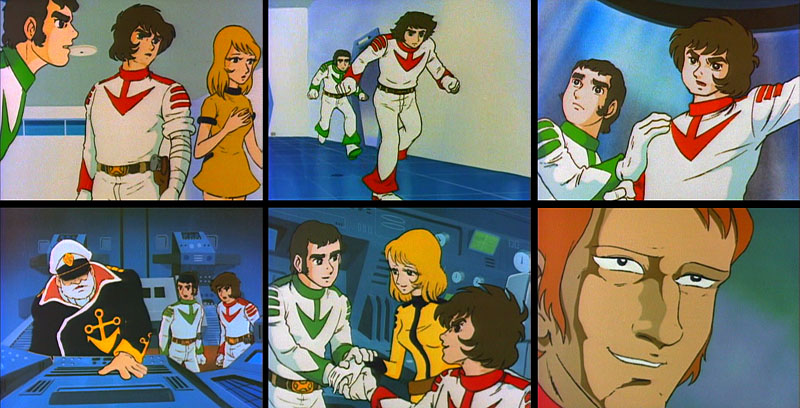 Mr. Shirato worked for many other studios, advancing to a supervisory position at Toei Animation for the Tiger Mask, Devilman, and Gaiking TV series. He and his staff of eight produced action animation for 8 episodes starting with episode 2, though Mr. Shirato had also been involved in episode 1. He became a core member of the Yamato production group, participating in each installment of the saga and serving as the supervising director on The New Voyage.

Artist Kazuhide Tomonaga was a particular standout at Tiger Pro; he animated the first scenes of Yamato in action (in episode 2) and the climactic battle at the Rainbow Star Group in episode 22. He later took an active role in Cagliostro Castle and Famous Detective Holmes under director Hayao Miyazaki. He was a mentor to Yoshinori Kaneda, whose bold, angular scene compositions would later enrich Be Forever, Yamato III, and Final Yamato. 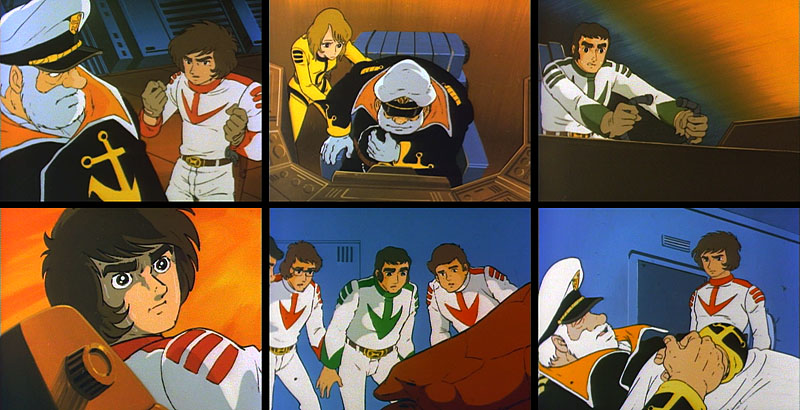 Mr. Koizumi had established his bone fides as a supervisor at Toei Studio before founding his own group in 1969 and directing Mazinger Z. Vs. The Black General. He and his staff participated in episode 5 and entered the regular rotation with episodes 9, 13, 20 and 24. Koizumi also drew the storyboard for episode 13. His work was well-liked by Nishizaki, who later hired him to supervise animation for Yamato 2, The New Voyage, and Yamato III. 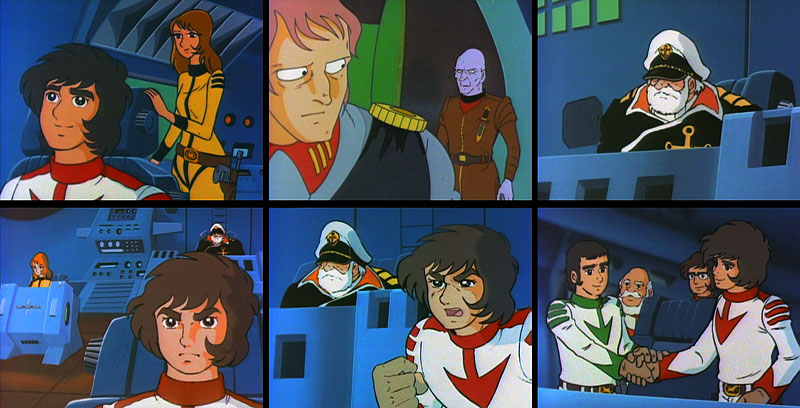 This studio was founded in 1974, named after a 1960s manga character Secret Detective JA. They dealt with episodes 4 and 7, then fell out of the rotation during the first half of the series, though some of its members continued on as freelancers. 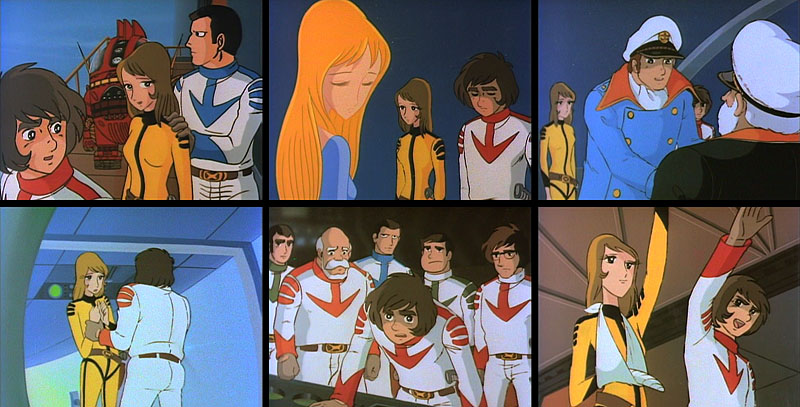 Founded in 1973 by artist Kazuhiko Udagawa, this studio participated in episodes 19, 25, and 26. Mr. Udagawa became a valued member of the Yamato staff, working on every subsequent production in the areas of character design and supervision. 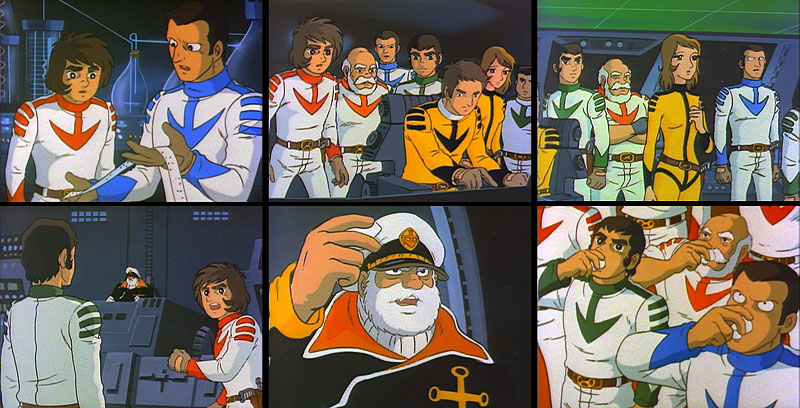 This studio only participated in episode 21. Mr. Sakamoto was also an accomplished manga artist, as were the others in his studio who were collectively known as “the Three Knights.” The unit went on to become the world-famous Nippon Sunrise (now simply ‘Sunrise’), the anime powerhouse that specialized in robot anime during the 1980s.

It should come as no surprise that other now-famous artists cycled through the first Yamato series. Two particular standouts were Yoshiyuki Tomino and Yasuhiko Yoshikazu. 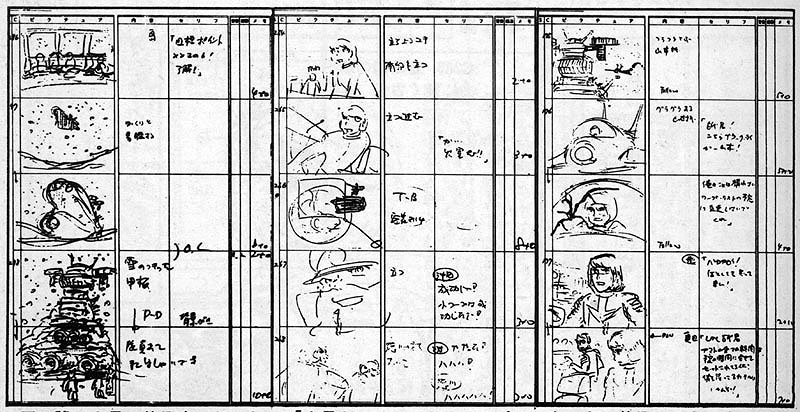 Tomino is one of Japan’s best-known anime creators, the mastermind behind the Mobile Suit Gundam franchise. He got his start as an animator in 1964 on the first, classic Mighty Atom [Astro Boy] TV series then worked his way up the ranks on an enormous number of productions including Ribbon Knight, Star of the Giants, Dororo, Moomin, Tomorrow’s Joe, Casshan, Heidi of the Alps, and many more. His first work for Yoshinobu Nishizaki was storyboards for eight episodes of Triton of the Sea, then he participated in Wansa-kun. He only contributed storyboards to episode 4 of Yamato, then went on to rival Nishizaki himself as a creator of anime blockbusters. 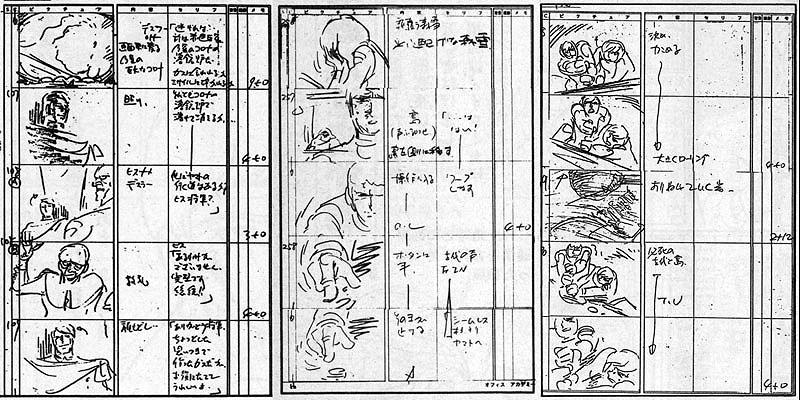 Yasuhiko Yoshikazu is now a giant of anime and manga, best known as the character designer for the first Mobile Suit Gundam series and the writer/artist of the ongoing Gundam: the Origin manga. He was one of a handful of artists who helped nail down Yamato‘s initial character designs (on Sanada/Sandor in particular), but his first anime experiences came on the Moomin and Wansa-Kun TV series. He was Yamato‘s most prolific storyboard artist, single-handedly delivering half of the entire series. (Specifically, he worked on episodes 6, 8, 9, 11, 12, 14, 16, 18, 20, 21, and 23-25.) By comparison, Leiji Matsumoto himself storyboarded 8 episodes with assistance from supervising director Noboru Ishiguro. “Yas” also contributed to Farewell to Yamato, painting the famous movie poster image and storyboarding the emotion-packed conclusion of the film. He also did storyboards for The New Voyage.

Last but certainly not least was the mighty Studio Nue [Nu-ee], a group of artists far ahead of the curve in terms of SF design. More than any other group, they were responsible for interpreting the Leiji Matsumoto aesthetic into anime for the first time. They were the ones who captured Yamato herself on paper and brought their considerable talents to bear on all the other mecha of the series.

They began as doujinshi (fanzine) publishers called SF Central Art. Their magazine, titled Crystal, was organized by chairman Kenichi Matsuzaki. They gathered on the second Saturday of every month at a regular club meeting at the art college from which two of its members, Naoyuki Katoh and Kazutaka Miyatake, graduated in 1972 and began looking for employment. They created Japan’s first all-in-one studio specializing in SF art called Crystal Art Studio, or CAS.

Their first professional work was to produce illustrations for a children’s musical TV show called Hirake Ponkitsuki, but anime mecha design wasn’t long in coming. Naoyuki Kato’s connections landed CAS some work on Zerotester, a Thunderbirds-like anime series that turned out to be a hotbed of talent. This is where they first became acquainted with director Noboru Ishiguro, an association that would pay off handsomely later.

Kenichi Matsuzaki got involved in the development of another series tentatively called Asteroid Ship. The avalanche of work was more than they could handle, so CAS was closed down and the three reorganized under the name Studio Nue, adding four more members and officially opening for business in the summer of 1974. This was shortly after Asteroid Ship became Space Battleship Yamato, and they were ideally positioned to work on it. Director Noboru Ishiguro welcomed them with open arms, relieved to have a design shop that was fully in tune with SF concepts.

Miyatake was already on the fast-track to stardom, turning out eye-popping illustrations for books about Masked Rider and Mazinger Z. Naoyuki Katoh’s specialty was painting, and he counted American artist Frank Frazetta as one of his prime influences. He later painted the stylized Yamato for the 1977 movie poster and went on to work on such high-profile SF anime as Legend of the Galactic Heroes under Noboru Ishiguro.

Brave Raideen came hot on Yamato‘s heels, so once again they were quickly snowed under. Yamato was definitely the more inspiring of the two, and the staff outdid themselves by delivering far more artwork than was required. Sometimes more than the animators could handle. Ishiguro wrote in 1980 that they had turned the word Yabuhebi, a shortened form of a proverb meaning “let sleeping dogs lie”, into Yabanue to indicate that it was best not to encourage the artists of Studio Nue too much, lest they overwhelm you with artwork.

After Yamato, steady work came in from Combattler V (1976) and Zanbot 3 (1977), two of the many Super-Robot TV series, and the studio was reunited with Leiji Matsumoto for 1978’s Space Pirate Captain Harlock. They also contributed to Farewell to Yamato that year; Miyatake worked closely with Matsumoto to create all the spaceships for the film.

The studio did much more than anime design, becoming a highly-respected source for novel and magazine illustrations and even writing–Matsuzaki later became a writer on Mobile Suit Gundam and another member named Haruka Takachiho created both Crusher Joe and Dirty Pair. A particularly significant assignment was to illustrate the Japanese edition of Robert Heinlein’s Starship Troopers, for which Miyatake designed what many consider to be the definitive version of the story’s Powered Suit (above right, painted by Katoh).

Nue rose to even greater heights in the 1980s when they collaborated with Noboru Ishiguro on Macross and Orguss. Miyatake shone as Nue’s brightest star on those productions, almost single-handedly designing all the mecha and scenery himself. The hyper-detailed look of the Macross movie (1984) is directly attributable to him. His other works included the Galaxy Express movie, My Youth in Arcadia, the live-action Sayonara Jupiter, Gunbuster, Eureka Seven, and every iteration of Macross. He finally returned to Yamato in the late 90s as the chief mecha designer for the Playstation games.

Read our interview and tribute to Naoyuki Katoh here

Read a 1980 Ishiguro essay about early days of Yamato here