A twenty minute train ride south of Hiroshima lies the port city of Kure, a home base for the Japan Maritime Self-Defense Force. This is possible because of a naval infrastructure that goes back to World War II; it was the building site of history’s largest battleship, the Yamato.

Today the Battleship Yamato Museum occupies the exact spot where the original was constructed and pays homage to both the engineering marvel and the city that was its cradle.

Google Earth immediately shows off the museum’s first striking feature. The building itself is outlined in red above left. The shape of the blue outline should be familiar even to a casual viewer: it’s a portion of the forward deck that has been reproduced at 1/1 scale in the landscape. At ground level it’s unmistakeable…and BIG.

The forward gun batteries are marked off in tiles on the wood surface. Standing here, the scale is instantly overwhelming, and it’s hard not to hear the space battleship’s shock cannons turning in your head. The bow fairing is replicated in concrete at the end of the walkway; if it were fully symmetrical, it would be very easy to get lost in your imagination.

The rest of the grounds are dotted with interesting attractions such as a deep-see research submarine, the Shinkai, which looks an awful lot like the old “tubby” Yamato seen in Akira Hio’s manga of 1974. Walking around to the front again, you come face to face with the business end of a rudder and screw that could easily crush a house.

And there’s more. The original bell of Battleship Yamato was exhumed from its watery grave and reconditioned for unlimited public use, and various other artifacts are lying around to instantly disprove the claim of “size matters not.” 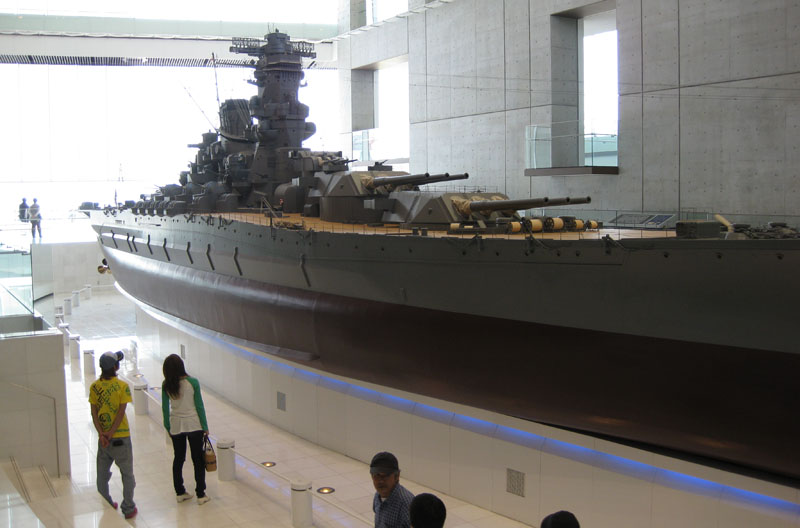 The centerpiece of the museum greets you as soon as you step inside: a magnificent 1/10 scale model of Yamato, a full 15 meters (about 50 feet) from end to end, that commands both your attention and imagination. Every rivet and rope line is here, along with 1/10 scale crewmembers that help keep it all in perspective for you.

Click here for a photo walkaround of the 1/10 Yamato.

From the central atrium that houses the giant model, there are two wings with other historical exhibits. One explores the history of Kure and the building of Yamato, the other houses actual wartime artifacts such as ordnance, a complete Zero fighter, and a kamikaze submarine.

All this would be a full-course meal for World War II navy buffs, but you have to visit the third floor to find out why the museum holds a special interest for Space Battleship Yamato fans.

“Future Prospects” is a wing devoted entirely to Yamato as a postwar phenomenon. The first sight that greets you upon entering is a wall displaying elements of engine technology that carry us into the age of rocketry. And a glance to the left brings you to a familiar face.

Yep, it’s our old pal Analyzer. It’s not the 1977 model (shown above right) built for a traveling exhibit to promote the anime, since there are numerous proportional differences (it’s a lot shorter, for one thing). This means it was built for some other purpose, perhaps even custom-made for the museum. Unfortunately, background documentation isn’t part of the display.

Click here for more photos of the Analyzer model.

Click here to hear what he has to say as you enter.

Stepping inside the pavilion, you’re greeted with a gallery devoted to the manga of Leiji Matsumoto. It traces his affinity for naval themes across most of his career.

…leading to more recent manga such as Great Yamato and Time Sweeper Mahoroba.

Just around the corner from this you can watch a 15-minute Matsumoto film made especially for the museum, a CG mini-opus titled Snow Angel in which a willowy blonde named Maya enlists the aid of a young boy named Mamoru to help divert a comet to Mars where it breaks up in the atmosphere and rains snow down upon the thirsty colony there. Classic, cheesy Matsumoto fun.

If that’s all there were to the exhibit, it wouldn’t be much to write home about, but it turns out to be the resting place for a very special piece of Space Battleship Yamato history that actually deserves to be in just such a place. To help you appreciate how special it is, here’s some background:

Yoshinobu Nishizaki threw a party in November 1977 to celebrate the tremendous success of the first Yamato movie. To help dress it up, he commissioned the building of two unique models: a 2-meter tall Analyzer (which we’ve already seen) and a 6.5 foot long Yamato officially referred to as the “Precision Cut Model.”

This was no cheap plastic throwaway. It was blueprinted by a company named Mori Art Design and built by Momiyama ship model factory. Its all-metal fabrication was by Gunji Model Craft, who produced models for Toho monster movies. It was designed by two artisans, Kurataro Momiyama and Tsunehide Mori. Momiyama was the son of Sakujiro Momiyama, who founded the Momiyama Warship model factory (the word “war” was eliminated from the name after World War II). Mori was the chief of Mori Art Design, who got his start designing injection molds for Nichimo plastic model company and went on to publish many books on warships. (Thanks to friend-of-the-website Sword Takeda for this background.)

The photo shown above right was taken at the 1978 success party for Farewell with the model rising high in the background.

The model became part of a traveling exhibit of other props and artifacts throughout the production years, so a second one was made to help promote Be Forever Yamato in 1980. It had the new stripe-and-anchor markings and appeared at least twice: at a press conference and on a TV special.

The next appearance was as part of a charity auction held in late 1983. The minimum bid was set at 8 million yen (about $80,000) but the price proved too high for prospective buyers, so both of the “Cut Models” went into storage for future use.

Two more sightings occurred in later years. Both models were on display at a 1987 anime fair, after which they were finally divided; the first one went to Yoshinobu Nishizaki and the Be Forever version went to Leiji Matsumoto. It next turned up in a 1998 interview with Matsumoto that was published in Comic Gon magazine. But what’s become of it since then? 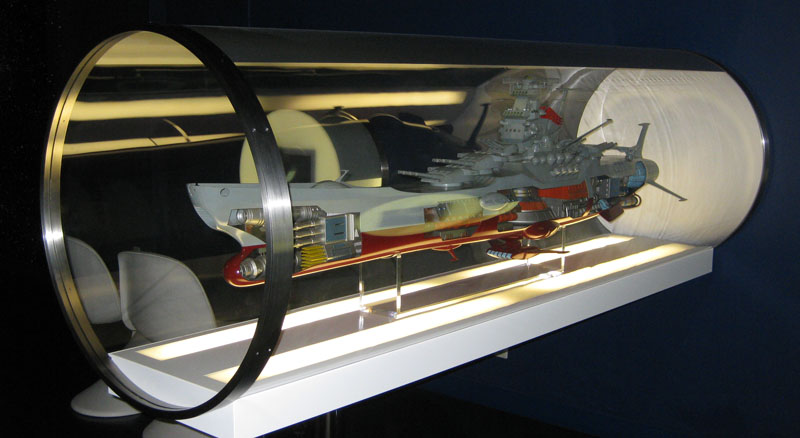 It’s alive and well and in full public view (as such a masterpiece absolutely should be) at the Battleship Yamato Museum. In an interesting twist of fate, it occupies a similar position in the Future Prospects exhibit as the massive 1/10 battleship does in the museum itself. To this day, it is still the best-made 3-dimensional Space Battleship Yamato in existence, and is far too important to be locked away in a private collection.

It is also in excellent condition, as this photo gallery will attest.

The other Cut Model (the one owned by Nishizaki) finally reappeared in September 2009 at the Yamato Perfect Revival Exhibition and various promotional events for Yamato Resurrection. Fittingly, it is still fully capable of fulfilling its original purpose after 30-plus years.

UPDATE: in August 2010, the cut model at the Yamato museum was transferred to a nearby location called Yamato Gallery Zero, dedicated to the works of Matsumoto. See more info here. 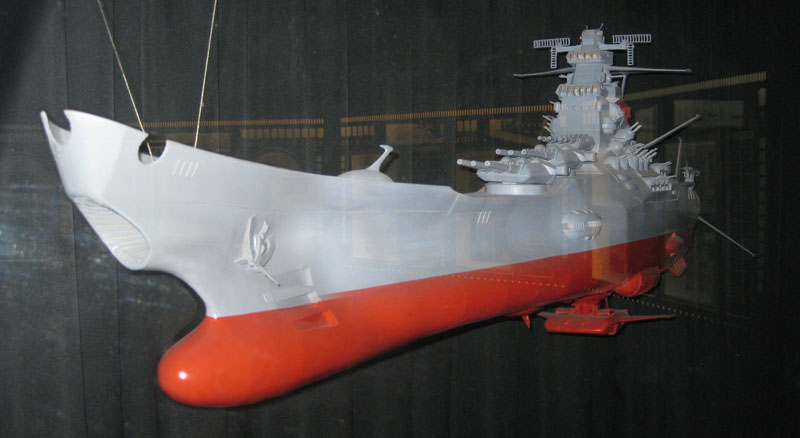 There is yet one more surprise in the “Future Prospects” exhibit that serves as an unexpected bonus: another large Yamato model, roughly the same size as the “Cut Model” that hangs suspended in a darkened case, dimly lit with no signage of any kind. 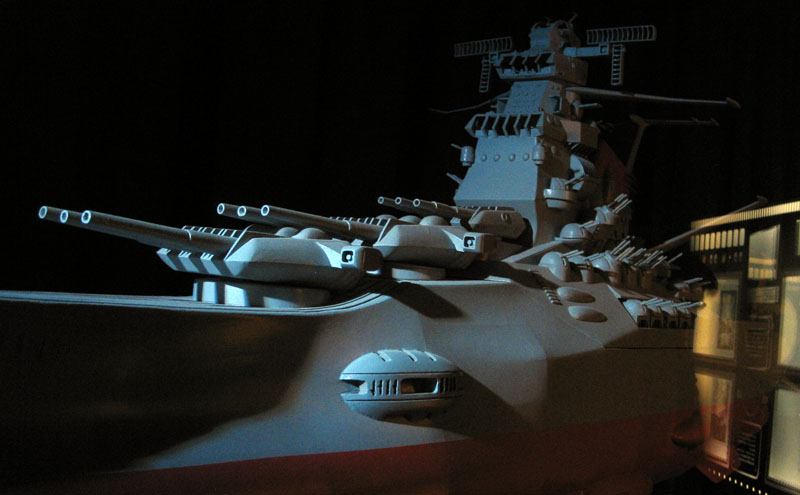 Like the museum’s Analyzer, its origins are elusive. But friend-of-the-website Sword Takeda reports that it was originally built out of wood by a Yamato fan in Southern Japan who generously gave it to Leiji Matsumoto as a gift. And here it resides, deservedly so.

The museum’s last point of interest for anime fans is a small gift shop in the corner of the lobby. It overflows with commemorative merchandise for the museum and the original battleship (including an entire shelf of books on both), and exactly one custom-made Space Battleship product, a 5″ display model in its own acrylic case. Made by Japan’s F Toys in 2006, this version is customized specifically for the Yamato museum.

POSTSCRIPT: In August 2010, all the exhibits in the “Future Prospects” pavilion were moved a few blocks away to “Yamato Gallery Zero,” a multi-level art gallery devoted to Leiji Matsumoto. See photos and a brochure here.

Click here to view the museum’s official site, which includes a PDF of the brochure

See the museum’s diorama of the sunken battleship

Wikipedia’s entry for the Yamato Museum

Homepage (with English text) for the City of Kure

Wikipedia’s entry for the City of Kure

Next to the Battleship Yamato Museum is a separate building that (as of April 2009) displayed leftover set pieces from the live-action 2005 film, Men of Yamato. They came from a partial 1/1 scale superstructure that was built for the movie and augmented by CG. Click here and here for photo-blogs of both the museum and a public tour of the movie set in 2005. (And here are some related YouTube clips for good measure: tourists visiting the 1/1 scale movie set | walkthrough of the exhibit we saw | music video for the movie.)

2 thoughts on “The Battleship Yamato Museum”