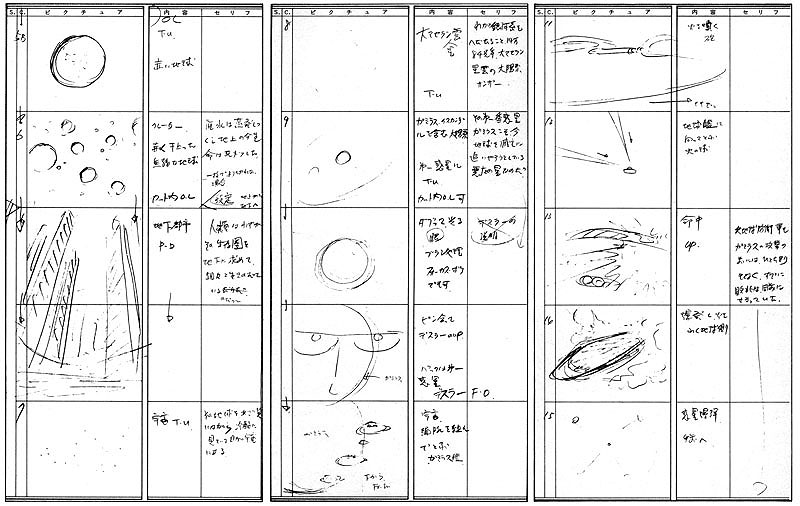 The precise timeline of Space Battleship Yamato‘s preproduction phase is somewhat sketchy, but the rubber officially hit the road in June 1974. Getting all the story ideas lined up was one thing; turning words into pictures for the first time was quite another.

As negotiations with the Yomiuri TV network augured toward a conclusion, Yoshinobu Nishizaki decided the major goal for the summer was to produce ten minutes of finished animation for a Yamato Pilot Film. Doing so would accomplish a number of different things. 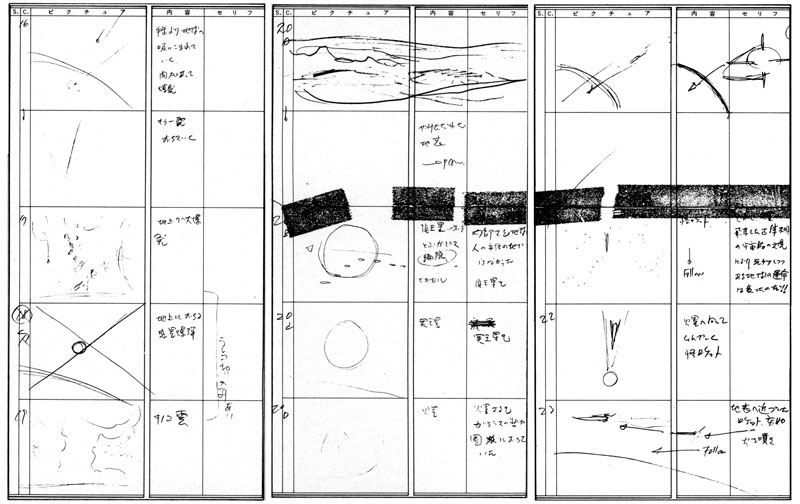 First, it would help to focus the design process. All of Yamato‘s main crewmembers and the ship itself would have to be shown, and working out a design method early on would benefit everything that came afterward. Second, it would give the fledgling crew a sense of what they were up against so they could begin to address the many complex needs of the production. Third and most important, they would be able to demonstrate to outsiders (broadcasters, licensors, advertisers, etc.) that a largely-unknown studio was capable of producing a competitive program. And finally, it would serve as an ideal reference document for copyright application. 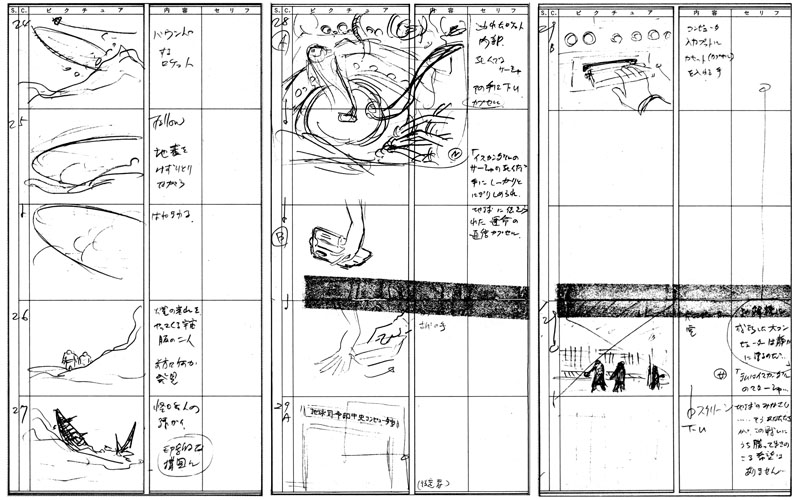 Character and mecha design got started immediately under the capable supervision of Chief Director and Character Designer Nobuhiro Okaseko. A veteran of both Toei Studio and Osamu Tezuka’s Mushi Pro Studio, he was well-known to Nishizaki after they worked together on Wansa-Kun. Okaseko had previously supervised two anime programs, the high school soccer series Akaki Chi no Eleven [The Red-Blooded Eleven, 1970] and superhero series Gekko Kamen [Moonlight Mask, 1972]. The roots of Yamato‘s character design can be seen in both. Some of his other credits include Captain Tsubasa, Cutie Honey, Mighty Atom, Future Boy Conan, and the first series of Lupin III. 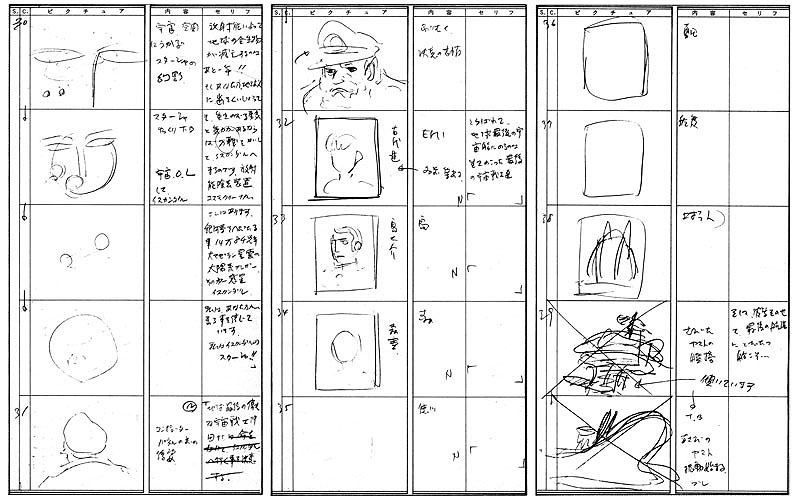 Leiji Matsumoto had already taken the first pass at each of the main characters, but in Okaseko’s opinion these designs were too idiosyncratic; translating them to anime would basically require the entire animation staff to learn how to draw just like Matsumoto practically overnight–an unrealistic prospect at best. Instead, they were re-interpreted in a much more anime-friendly style by Okaseko and a few others (including the very talented Yasuhiko Yoshikazu, who would produce about half the storyboards for the TV series). This was a difficult learning curve for Matsumoto, but he breathed easier when his designs for Dr. Sado, Analyzer, and Starsha got through the process almost untouched.

The script for the Pilot Film was as simple as could be, a verbal presentation (probably written by Keisuke Fujikawa) with just two voices, a narrator and Queen Starsha. This resulted in the casting of Yamato‘s first voice actors, Goro Naya as the narrator (later Captain Okita) and Michiko Harai as Starsha. 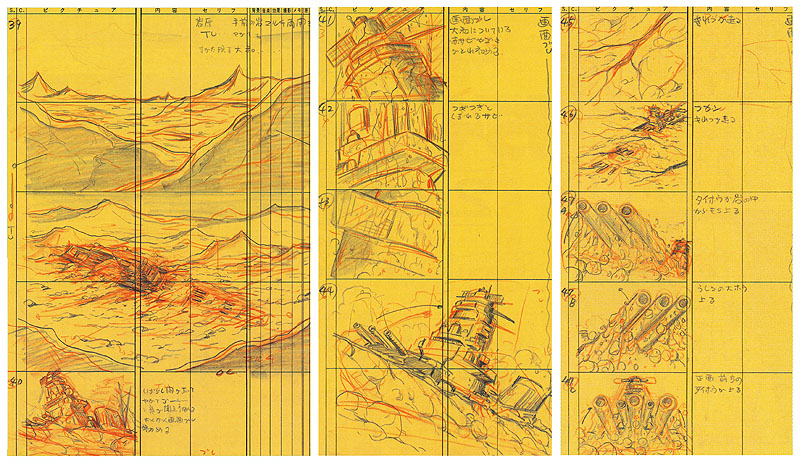 This also marked the entry of Animation Director Noboru Ishiguro, at least on a part-time basis. He was still involved in a comedy series called Dokonjo Gaeru [Gutsy Frog] and would remain so until late summer. Therefore, he was only able to share storyboarding duties with Okaseko. Those storyboards (shown in full on this page) represented a significant milestone; the first time a Yamato scene was rendered on paper and the beginning of a process that would become more demanding than anyone could imagine. It is believed that Matsumoto took part in the storyboarding as well, but specific evidence is elusive.

The film was the first production undertaken at Office Academy’s studio in the Sakuradai ward of Tokyo. The animators were Toyoo Ashida, Kazuhiko Udagawa, Takao Ogawa, Seiichi Nodate and Kouzou Masanobu–all of whom would continue onto the series. Ashida personally animated the scenes of Planet Bomb destruction and flying rocks that became an iconic part of the opening montage for most of the TV episodes. (Read our tribute to him here.) 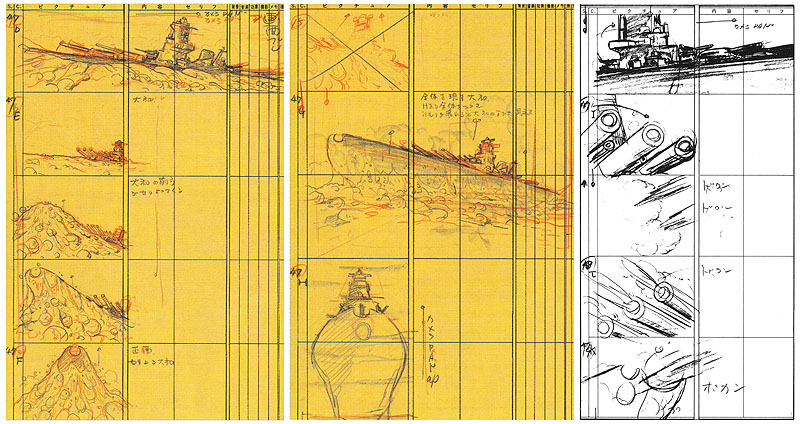 Background paintings were done by Hachiro Tsukima, formerly of Mushi Pro. Both light and dark colors were experimented with for the space backgrounds. After this, it was decided that a dark navy blue would be the basic outer space color for the series. A system of color codes was created for special-ordering cel paint. But the brightness of the colors was underestimated on the pilot, so Yamato‘s red hull was later toned down to a reddish-brown color. Discoveries like this where what made the Pilot Film such a valuable project.

Mushi Pro was in a state of reorganization after enduring a bankruptcy, and they solicited Office Academy to hire them for the photography. The sound director was Atsumi Tashiro and the sound effects were by Mitsuro Kashiwabara, both of whom would stay on for the duration. Because Hiroshi Miyagawa had not yet been hired to compose music, the following tracks were used:

Track 1: Spirit of Summer by Eumir Deodato. From the album Prelude (1973).

Track 2: Love theme from The Getaway by Quincy Jones. From the album You’ve Got it Bad Girl (1973).

Eumir Deodata is a Brazilian musician and producer whose rendition of Zarathustra reached number 2 on the Billboard Hot 100 in March 1973. Read more about him here.

Quincy Jones is a legendary musician and producer who needs no introduction, but you can read more about him here.

Atsushi Tashiro curated these tracks from his own personal collection. They were almost certainly unlicensed at the time, since the pilot film was only intended for private screenings. (However, it was later released fully intact on home video.) 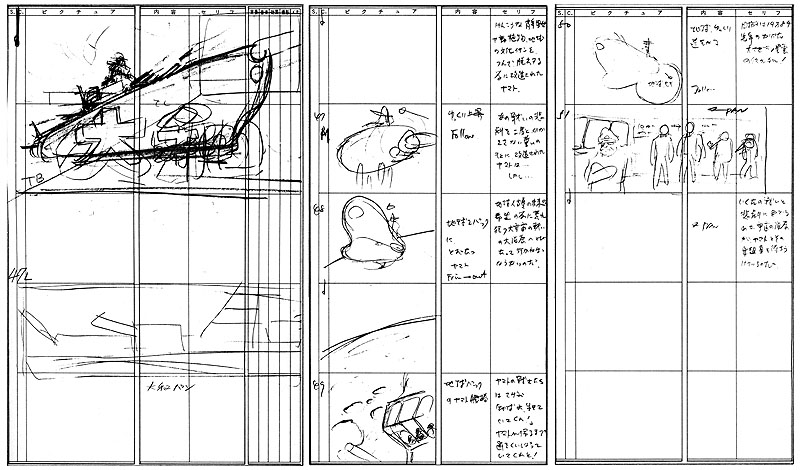 The film was completed in August 1974 and at least nine copies were distributed to interested parties, agencies and affiliates.

See a gallery of stills from the Pilot Film here.

A companion project was undertaken that summer as well, though its specific timeline is as yet unknown. It was a large-format (10″ x 14″), full-color 16-page publicity book filled with designs and the basic selling points for the story. It was particularly handy for capturing the attention of prospective licensors like the Lotte Candy Company, who would need a collection of eye-catching images for boxes, wrappers, and the like. Some of the art from this book would appear on early merchandising, and also functioned as a style guide while animation designs were still in progress.

See the Publicity Book from cover to cover here.

No one could have anticipated at the time that it would be the one and only publication to promote Captain Harlock as a full-fledged member of the cast. Before he was cut from the series, he made a handful of appearances on various spinoff products. As a salute to his very brief Yamato career, let’s examine them one by one…

Here we see the actual design for the show, created by Leiji Matsumoto and refined for animation by Nobuhiro Okaseko. Keep in mind that until about episode 10, Harlock was for all intents and purposes still in the show, waiting for a debut that would never come.

Three different manga versions of the first series got underway the same month as the show itself. Leiji Matsumoto drew a shrouded Harlock in his version, published in Adventure King magazine. Meanwhile, Yuki Hijiri (above center) and Akira Hio (above right) based their Harlocks on the anime design. Hijiri’s manga appeared in Terebi Land magazine, and Hio’s manga was published in paperback.

The anime design also appeared in the first novelization by Arashi Ishizu in which Harlock and Okita made a last stand together, Butch-and-Sundance style. Finally, the space pirate took his place among other Yamato characters in wrappers that came with bubblegum from the Lotte Company. This was the last anyone would see of him until Space Pirate Captain Harlock made his anime debut in 1978, and he’s been sailing the sea of stars ever since.

Together, the Pilot Film and the Publicity Book marked the transition from Yamato as a concept to Yamato as reality. The many and varied origins of the series were now solidified and development finally gave way to production. As chronicled elsewhere on this site, it was to be a much greater challenge than anything that had come before. The Pilot Film, in fact, was a harbinger of the difficult times that lay ahead. 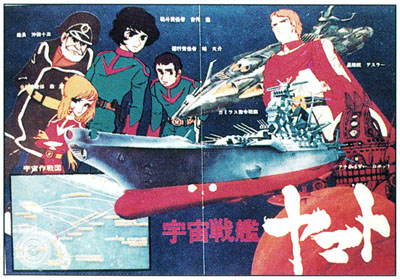 Nobuhiro Okaseko began to experience health problems during the summer, and collapsed from extreme fatigue just before the TV series went into production. With the Chief Director now hospitalized, Ishiguro got a battlefield promotion to take his place. He already had a long list of credits by that time, having directed for Mushi Pro and previously worked for Yoshinobu Nishizaki as a director on Wansa-Kun. He brought some of his assistant directors on board from Dokonjo Gaeru, including Kazunori Tanahashi, who would continue as a Yamato staffer for years to come.

Okaseko finally returned to perform character design on Episode 13 and take up animation duties on Episode 16. By then, the production had been in panic mode for months and would remain that way to the end. There was no way of anticipating this during the previous year, as Space Battleship Cosmo slowly evolved into Asteroid Ship Icarus and eventually Space Battleship Yamato. There was also no way of knowing all that hard work would ultimately change the world of anime forever.

This concludes our Yamato Origins series. Click on these links for further reading:

Noboru Ishiguro Essay on the making of Series 1