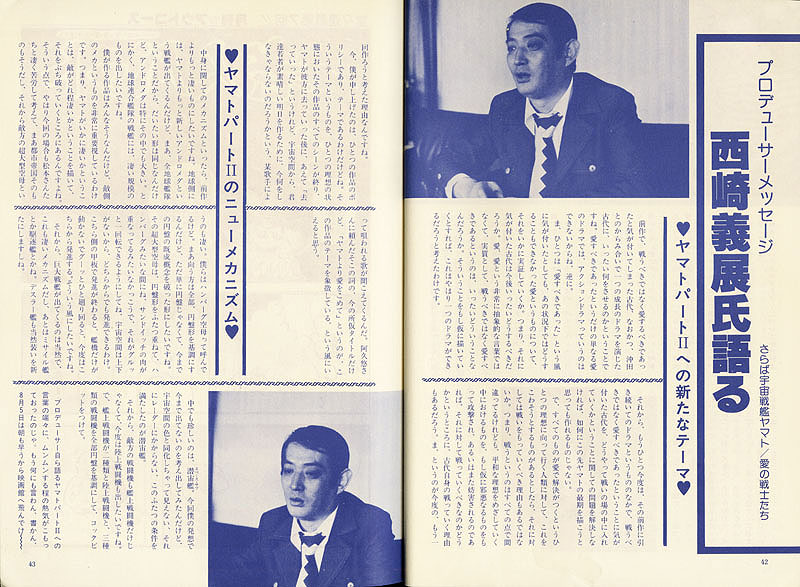 The new theme for Yamato Part 2

The main concern was what to have Kodai do. In the previous work Kodai realized that he should have had love instead of hate, and experienced the drama of growing up under Captain Okita. Conversely, we could not create an action drama that merely says “we should have had love” but does nothing about it.

Although he realized that he should have had love, he could not do anything under such circumstances. How can we continue that theme? In other words, what would Kodai do next with that realization? Love can be very abstract, but what does “I should not have fought but loved” mean in a practical sense? We thought we could create a new drama by pursuing these issues.

In this work, we needed to place Kodai back in battle despite his previous realization. Unless we could solve this dilemma, we could not create a new story even though we wanted to present the end of Yamato.

If there is someone who wants to destroy mankind, and mankind (in this case, Kodai) holds the ideal that everything can be solved by love, then perhaps he will find a reason to fight back. Fighting is wrong at every level, but if humans are attacked by someone with an evil intention, should they fight anyway? Kodai might find a justification to fight. This was another reason for us to create this work.

What I’ve just described is the policy and theme of this film. This story was an ideal way to explore the theme, and when every scene has played out and after Yamato has disappeared into the distance — I intentionally say “disappeared” — the viewers will hear a song from space, which asks what you can do now to create a wonderful tomorrow. The song title is From Yamato With Love, and it symbolizes the theme of this work.

Regarding the mechanical design, I wanted it to be more amazing than the previous work. The Earth has a battleship named Andromeda, much newer than Yamato. It belongs to the Earth Defense Forces, and the other battleships are similar, but Andromeda is particularly large. At any rate, I want to show the tremendous scale of all the battleships in the E.D.F.

I also highly regard the importance of mecha on the enemy side, and my works are all the same on this point. That is, by presenting how strong the enemy is, we can see how tremendous Yamato is when it destroys them. Mr. Matsumoto and our mechanical designers worked very hard on this point and put a lot of thought into their work.

One of the great designs is the Imperial City. Another is the gigantic aircraft carrier of the enemy. (We call it the “hamburger” aircraft carrier.) A basic disc shape is the basis of all the designs of the enemy side, but they are not simply flying discs. We want to destroy conventional concepts with our designs. The gigantic aircraft carrier looks like two discs in a stack, and there is a layer between them, like meat in a sandwich. The whole thing can move around 360 degrees. Since there is no up or down in space, ships can launch from both sides. 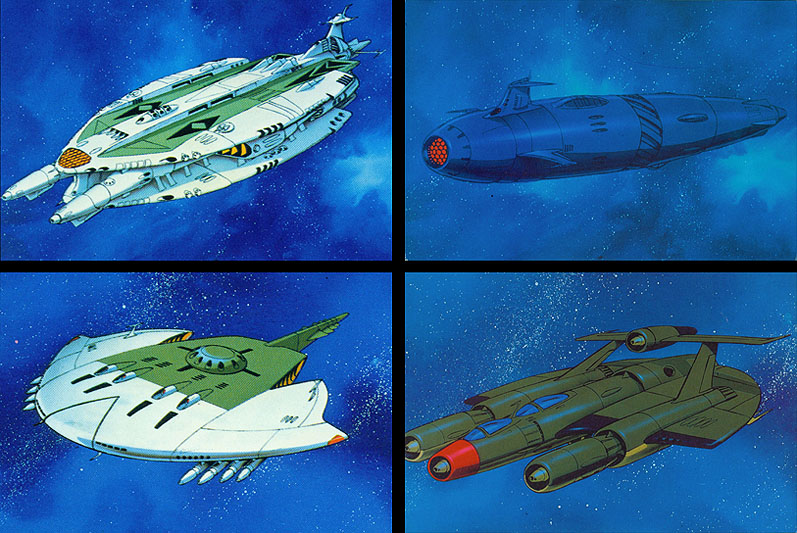 After ships launch from one side of the deck, it rotates around the main bridge, then more can launch from the other side. I’d like to make a real aircraft carrier like this. Then, of course, the enemy side has a gigantic battleship which is a magnificent mecha, and there are also great missile ships and destroyers. The ship of Dessler will, of course, be a new model.

Among the new mecha, the space submarine is unique. It was my idea and I tried to create something that has never been seen. The submarine meets two conditions of mine. First, it becomes invisible, adjusting its color to the space around it. Second, radar cannot catch it.

In addition, regarding the fighters of the enemy side, we want to show not only spacecraft, but also aircraft. So we created two types of spacecraft plus one aircraft. All three share the basic concept of disc-style shape with added cockpits.