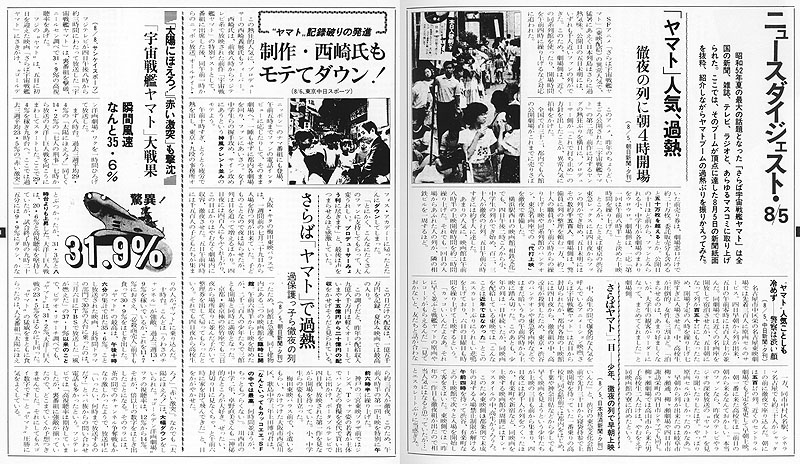 In the summer of 1978, the biggest topic in national newspapers, magazines, and TV in Japan was Farewell to Yamato. It was also taken up in radio and other forms of mass communication. Here are some newspaper articles from the peak of the boom on August 5, a look back at Yamato‘s influence on evolving pop culture. 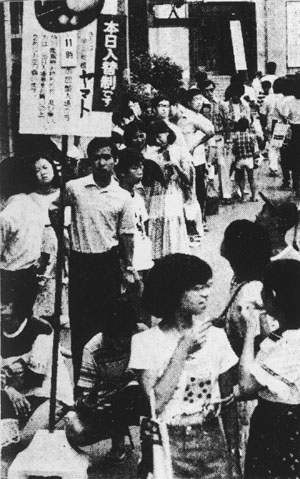 After an all-night vigil, the doors are opened at 4am

The Japanese Islands are suffering under intense heat, but the craze over SF anime Farewell to Yamato (distributed by Toei) shows further overheating. By the morning of the premiere on the 5th, there were lines of nearly 1,000 fans. Consequently, theater owners used nearby buildings to accomodate them and opened their doors as early as 4am.

This was for the sequel to Space Battleship Yamato, the anime film shown at this time last year. It was unusually popular, and the producer’s policy to present “the end of the story” spurred the craze and revived the previous excitement among young people.

The film opened in 132 theaters nationwide, and approximately 200,000 advance tickets were sold at the box offices of eight Tokyo theaters. Including tickets sold on a consignment basis, the number exceeds 500,000.

Ten days prior to the premiere, only a few fans of junior high-age gathered around theaters. Early screenings had been tentatively scheduled for 8:30am. However, fans began to line up at the Tokyu Rex Theater in Shibuya, Tokyo on the night of the 4th; their numbers swelled to approximately 1500 by the morning of the 5th. Theater staff asked security guards to form the crowd into a line while about 20 staff members prepared an extra early show for 6am and overnight in parallel with the Pantheon theater chain and Tokyu Classic Theater.

Sotetsu Bunka Theater near Yokohama Station also had an overnight line of 120-130 primary and junior high students, which began to form at 2pm on the afternoon of the 4th. It reached about 1,000 people by 6am on the 5th, and the theater responded to the film’s popularity by moving up the first screening by approximately two hours. The line of people for the first screening still wrapped around the neighboring Sotetsu Building. 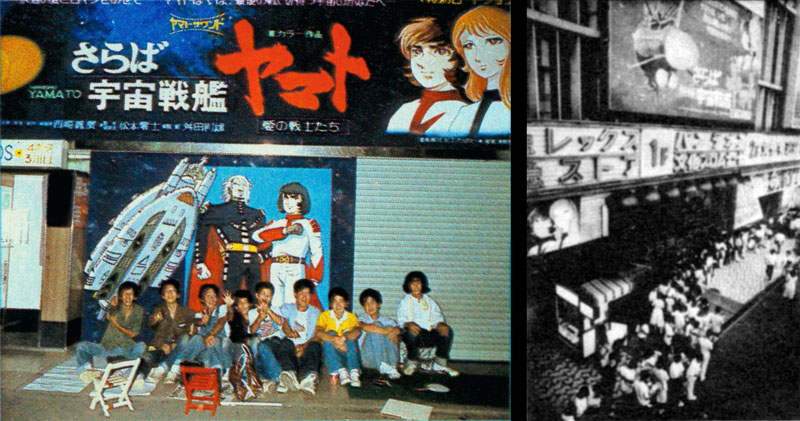 Yamato‘s Popularity Does Not Cool Down This Year Either

Original animation cels were given out to the first 300 people to arrive at the Toei theater in Sakae, Nagoya. The line began to form in the early morning of the 4th and surpassed 100 by midnight. The line stretched to 150 meters on the morning of the 5th, so the doors were opened an hour early at 7am. While the crowd consisted overwhelmingly of high school students, about 30 percent were female.

“It seemed very unlikely that they would stay outside overnight,” the theater crew said, “but college student leaders handled the crowd well.”

Meanwhile, at Nakamura-Ku-Mei-eki Station in the same city, about 30 people sat all night in front of the shuttered Nagoya Cinema in a line that was 500 meters long by morning. The nearby Central theater changed its timetable to begin screenings early in the morning.

High school students who came by early morning train complained, “It was strange to come yesterday morning, since true fans must have stayed home for the TV and midnight radio versions of Yamato. They must have been tempted by the cels.”

The line was formed early in the morning on Yanagase Street in Gifu City. The same was true for the Yanagase Theater and Yotsuk-ichi Cinema in Suw-Sakae-Machi. The Out of necessity, the Yanagase theater housed two high school boys from Takayama City in the theater dormitory.

Boys Sit Up All Night for Early Morning Screenings

Farewell to Yamato, the animation movie that became explosively popular among high school students, was released on the 5th. Because high school students rushed to various theaters in Metropolitan Tokyo and waited in groups all night on the 4th, screenings began as early as 4am when it was still dark at the Tokyu Pantheon Cinema in Shibuya.

“This kind of thing hasn’t happened in recent years,” said delighted film distributor Toei after seeing the escalating activity. It was said that screenings would also begin early on the 6th.

Some high school students had been waiting with their sleeping bags in front of Shibuya’s Tokyu Cultural theater since July 30th. Asked about this, they said, “Yamato is the greatest. Besides, you can get original art or records of the movie by standing in line early,” and, “It won’t be easy to talk to my friends if I don’t see it.”

At other Tokyo locations, boys arrived as early as the 3rd to see the movie in Chiba and Kanagawa, and lines of about a thousand people clad in T-shirts milled around theaters in Shinjuku and Yurakucho on the night of the 4th.

The Toei Company allowed Shibuya and Yurakucho Audiences to enter right after the restriction expired at 4am. The Tokyo restriction prohibits teenagers from entering any show facility from midnight to the early morning.

“We thought it would be very popular, since all-night groups appeared for the first movie last year,” Toei said, but the impression was that it had escalated this time.

Even Producer Nishizaki is Floored!

Even Producer Yoshinobu Nishizaki is feverish over the enthusiastic popularity. Mr. Nishizaki was a special guest on Fuji TV at 8pm, just before the airing of Space Battleship Yamato [the movie]. After attending the show, he appeared on Nippon Broadcasting’s live program All Night Nippon to accept calls from fans from 1am to 5am. Without even stopping for sleep, he went out to greet fans at Tokyo theaters the next morning. With Kamikaze skill, he faced an assault of handshakes and autograph requests from junior high school girls.

Fatigue finally caught up with him at 10am when he returned to Office Academy Studio in Tokyo.

“Supported by such a tremendous number of people, I cannot ever be happier, especially as a movie producer.” His words were muffled by full emotion.

The film set a new summer vacation record by taking in 150 million yen on the first day. Last year’s box office earnings were 980 million yen, and it was assumed this film would do slightly better. The way things are going, it is likely to earn 1.5 to 2 billion yen. 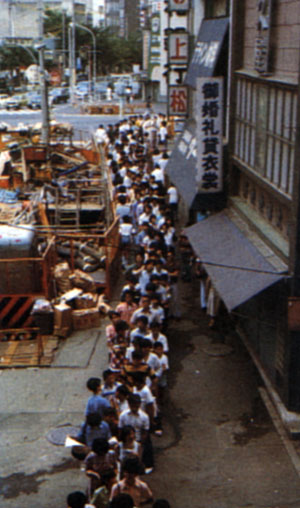 Overheated by Farewell to Yamato

The Overnight Vigil of Determined Children

A line began to form one week ago in front of the Toei Palace Theater in Umeda, Osaka on July 29. It was ignored at first, but it continued to grow day by day. On the night of the 4th it swelled to 400 people and the theater reluctantly opened to accommodate them. They stayed up all night.

Because 1500 children had gathered by 4am on the 5th, two theaters were hastily opened on a temporary basis. The show started at 6:30 in the morning, and the theater was full all three days with a total of 2,300 boys.

At Shochiku-za in Shin-Kyogoku, Kyoto, a boy arrived to stand in line on the night of the 3rd, so the theater staff gave him a numbered card proving he was the first and sent him home. Nonetheless, about 300 high school students stayed up all night from the night of the 4th. Because of this, the first screening was moved up from 8:30 to 6:30am.

At the Toei Plaza theater in Sannomiya, Kobe, young people dressed in jeans and T-shirts stepped out of the crowd in turns to buy bread and other food, then watched the first movie on a portable TV while waiting for the doors to open.

Smaller children of junior high age stood out as well. Given pocket money, they rushed to the front of Umeda Toei Palace. Hiroshi Ueda, a senior at Utajima Junior High in West Yodogawa Ward said, “It’s greater than anything, the best in SF. Even if we stand in line for several hours, it’s no problem.”

Naomi Takuno, a second year junior high student in Kawanishi City, said passionately, “I love Yamato‘s fantasy and mystery elements. I must see it on opening day! So I left home at 6am and rushed here.”

Bark at the Sun! and Red Crash both Defeated; the Triumph of Space Battleship Yamato

Space Battleship Yamato, which was broadcast on Fuji TV in a three-hour timeslot beginning at 8pm on the 4th, overwhelmed programs on other channels and achieved a 31.9% rating according to Nielsen results. Yamato was shown on Fuji’s Golden Foreign Film Theater as the harbinger of Farewell to Yamato, which premiered on the 5th.

Yamato began around 8pm, competing with Bark at the Sun! [detective drama/Yomiuri TV] whose previous three weeks’ ratings average was 29.4%, Seven Detectives [detective drama/TBS] at 14.2%, and the Whales vs. Giants baseball game that had started at 7pm. During the period Yamato achieved 29.4% at around 9pm.

Then, competing against Red Crash [suspense drama/TBS], whose previous three weeks’ rating averaged 23.5%, Yamato ascended to 31.3%, higher than its 8pm start time. The baseball game maintained at 20.6%, but when it finished at 9:25, the rating went down to 9.9% and many switched to Yamato.

Among movies or long-form dramas aired this year, the only one to surpass 30% was Wind Burned [samurai drama] on TBS, which achieved 37.1% on March 6. Video research surveys reported that Yamato‘s 31.2% far surpassed the baseball game’s peak of 23.5%.

Severely damaged by Yamato were popular TV dramas such as Bark at the Sun! and Red Crash, whose ratings were down. The usual Golden Foreign Theater average rating is 12-14%, so Yamato more than doubled this number.

There seemed to be a race to find out what was behind the ratings competition. During the Yamato broadcast, Fuji Television received many calls from dads (who much prefer baseball games) asking when the program would be over. Fuji sounded very pleased with Yamato‘s triumph, saying, “we had expected high ratings, but there are many tough competitors so we could not imagine how far it would go. We are thrilled to know the result. This is tremendous.”

Translator’s Notes: Most Americans have no knowledge of the various programs mentioned in this article, but it was a very significant achievement for Yamato to have bested its competition, particularly Bark at the Sun! which was an extremely popular crime drama equivalent to anyone’s favorite police procedural programs today. Additionally, Red Crash was the seventh installment in “The Red Dramas,” a series of made-for-TV-movies that regularly attracted huge audiences.

Something else that made Yamato‘s victory over Bark so noteworthy was the network affiliation. The original Yamato series was broadcast on Yomiuri, but the network’s bid for the movie was bested by Fuji. By rights, Yamato and Bark should have been two jewels in the Yomiuri crown, but instead they became competitors. This continued for many years with Fuji landing all subsequent Yamato films. As a result, Yomiuri later bid on (and won) the exclusive broadcast rights to all of Studio Ghibli’s anime movies.