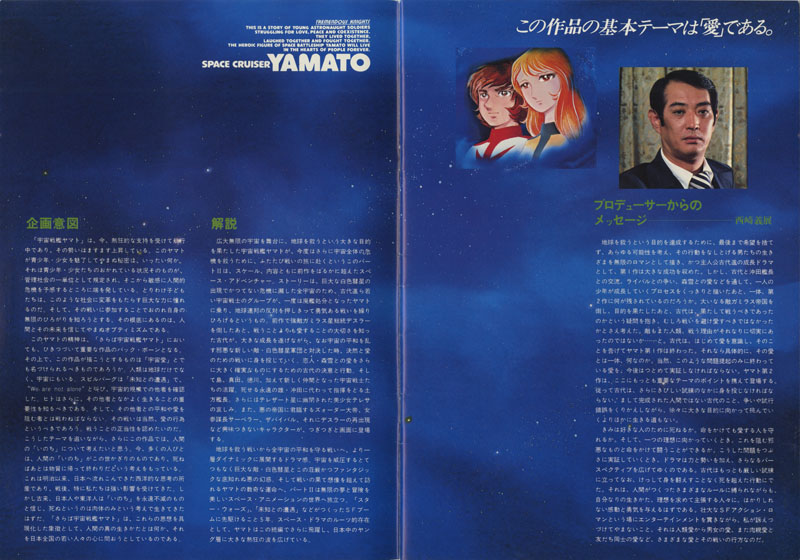 This is a story of young astronaut soldiers struggling for love, peace, and coexistence.
They lived together, laughed together, and fought together.
The heroic figure of Space Battleship Yamato will live in the hearts of people forever.

Having received enthusiastic support, Space Battleship Yamato continues on its voyage, and its force is ever increasing. What is Yamato‘s secret that attracts young boys and girls? It originates from their premonition of a crisis they face as human beings in circumstances that reduce them to units of a controlled society. Children in particular long for the power to change such a society. They try to understand their own depths by participating in the struggle. At the core of such desire lies an optimism that believes in human beings and their future.

This spirit of Yamato is the backbone of Farewell to Space Battleship Yamato. Based on this spirit, what we want to present in this work can be called “universal love.” Human beings exist not only on Earth but also in space. In Close Encounters of the Third Kind, Steven Spielberg claimed, “We are not alone” and recognized the others on a universal level. Human beings should understand the importance of coexisting with others. Moreover, humans must fight against those who interfere with the peace and love between the others and us. Of course, this fighting should be regarded as an action of love. We want to recognize justice in such fighting.

While following these themes, we would like to think further about the lives of people. Today, many people believe that the life of a person in this world ends with the death of the body. This is a product of Western thinking that has crept into Japan since the Meiji Period. In particular, we have been strongly influenced by Western thinking since the end of the war. However, since ancient times, Japan and the Orient has regarded life as immortal and death happens only to bodies. Farewell to Yamato is the materialization of such thoughts and asks our youth to decide which is the real way of life for mankind. 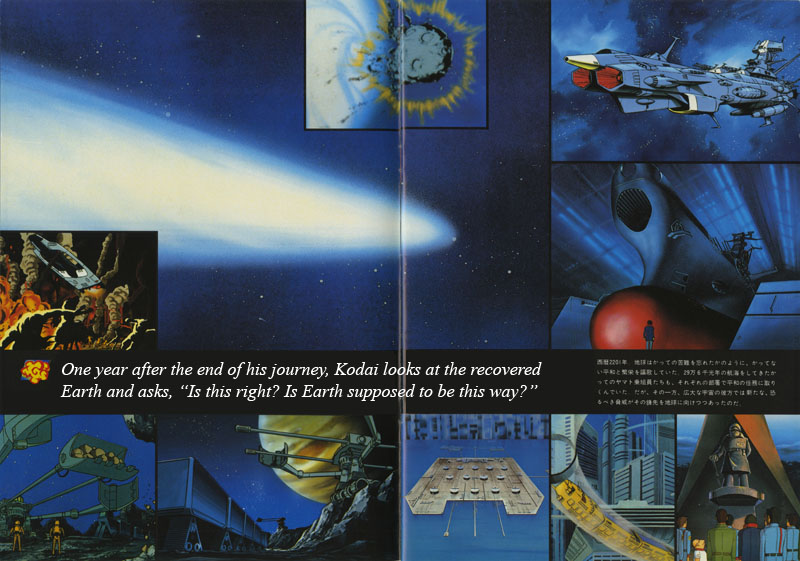 Yamato completed its great mission to save the Earth with the infinite universe as its stage. The story of Part II, in which Yamato will embark on a new fight to save the whole universe, is a space adventure which greatly surpasses the previous work in both scale and content. Susumu Kodai and the other young space soldiers show great courage by overcoming the opposition of the Earth government and boarding Yamato, which was put out of commission. Kodai, who after defeating Emperor Dessler learned that to love is more important than to fight, will continue his growth and resolutely throw himself into the battle for love when confronting the White Comet Empire, the new evil enemy which disturbs the peace of the universe.

Kodai’s decision and actions strengthen his love with Yuki Mori. The other characters also take action; Shima, Sanada, Tokugawa, and new characters–Captain Hijikata who succeeds the eternal leader Captain Okita. And there is also the sadness of Teresa, the beautiful woman imprisoned in the Planet Telezart. Also, interesting characters such as the Great Emperor Zordar who reigns over the evil empire, his female Chief of Staff Sabera, Zabaibal, and the returning Dessler, will appear onscreen one after another.

This dynamic drama develops from a fight to save the Earth into a battle to protect the entire universe. The fearsome White Comet which conquers all of space is a fantastic symbol of infinite evil. And, with the unexpected, unimaginable destiny that emerges at the end of the battle, Part II begins another journey in the world of SF animation with endless dreams and adventures. Yamato preceded by three years the SF boom created by Star Wars and Close Encounters of the Third Kind. Yamato, almost regarded as the root of space drama, will leap further ahead with this sequel and provoke a wave of great excitement among the younger generation of Japan. 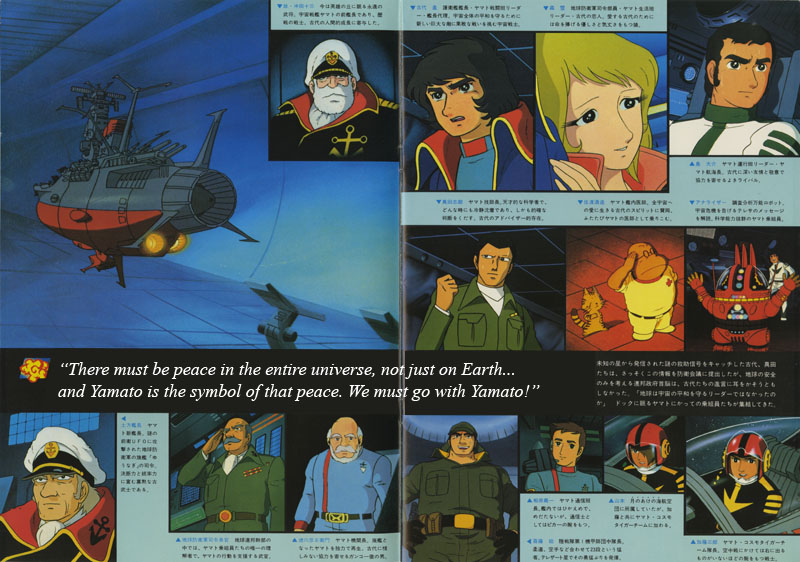 The Fundamental Theme of this Work is Love

A message from the producer, Yoshinobu Nishizaki

The first Yamato enjoyed a huge success by depicting the lives of men who never gave up hope, considered all possibilities, and turned thought into romantic action. It also presented the drama of growing up through the main character, Susumu Kodai. What is next, after the boy grows up, faces his enemy, and finds love with Yuki Mori? After defeating the Gamilas Empire and achieving his goal, Kodai had doubts that he should have fought at all, and even felt that he should have avoided fighting and sought love instead. The enemy is also human, they might have had a justifiable reason to fight. For the first time, Kodai became conscious of love, and the first work of Yamato ended with his realization. So, to be precise, what is the nature of the love he found? From here, we need to explore this issue.

Now the second work of Yamato appears, keeping this most important point as the theme. Therefore, Kodai must throw himself into intense new ordeals. He has not fully matured yet, and does not have any choice but to continue fighting, to repeat both trials and errors while gradually advancing toward a greater goal.

Would you die for your beloved? Would you protect your beloved even at the risk of your own life? Moreover, would you give your life to fight a great evil, in defense of an idea? While exploring these issues in detail, the drama will have more power and force, further enlarging its perspective. Kodai never turns aside, even when he faces the ultimate test. This must give hope and courage to those who insist on their own way of life, against the restrictions of other peoples’ rules. While as entertainment this film is a magnificent SF action story, what appeals more to me are the various forms of love; the love of mankind, the love between a man and a woman, the love of a family, the love between friends–and where their fight will take them. 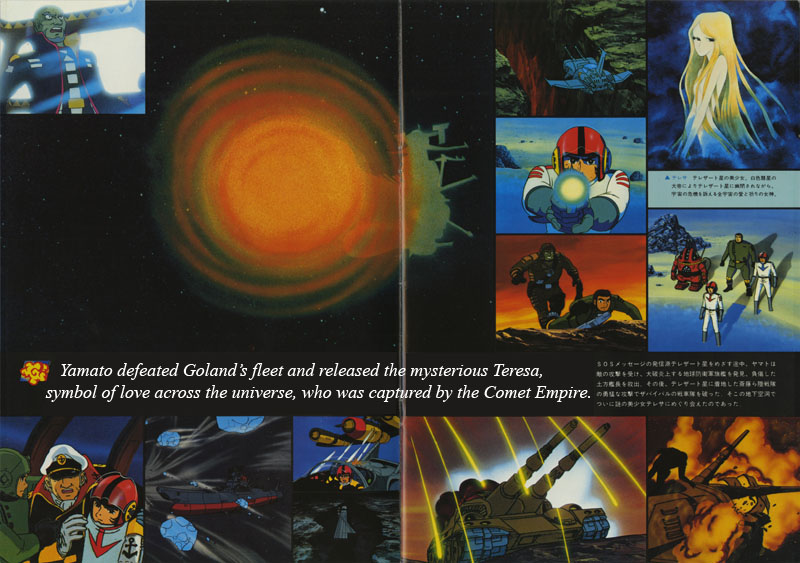