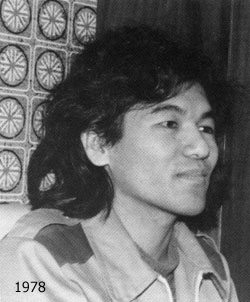 By now, everyone with an interest in anime production in general, and the making of Space Battleship Yamato in particular, should instantly recognize the name Studio Nue. They were among the first independent companies to specialize in design for anime, film and SF media. The members of this elite group made their mark not only with Yamato, but also such classic fare as Macross, Crusher Joe, Dirty Pair, and plenty more. Looking at the broad sweep of SF anime from the late 70s forward, if Studio Nue didn’t have a hand in it, they certainly had an influence on it. (Read more about the group here) 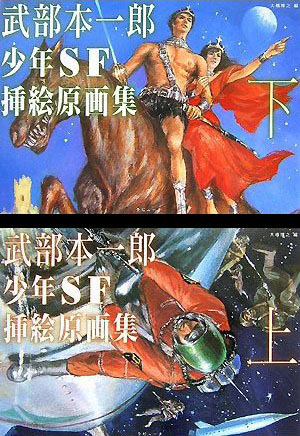 Elsewhere on this website we hear from Kazutaka Miyatake, the Studio Nue veteran who put in the most labor on Series 1 and Farewell to Yamato. Now we meet another: artist/painter/designer Naoyuki Katoh.

Born 1952, he was strongly influenced by renowned SF painter Motoichiro Takebe (works pictured at right), who inspired him to pursue a career as an SF illustrator. While attending Chiyoda design school, Katoh fell in with like-minded individuals who would all team up professionally in 1972. A year later, he took first place in an SF art contest sponsored by Hayakawa Publishing and began cover painting and interior illustration for the company’s novels and their periodical SF Magazine. It was only the first of his many awards and accomplishments.

Few artists actually get to step into the shoes of their idols, but that’s exactly what Katoh did after the death of Motoichiro Takebe in 1980. Katoh inherited his idol’s position as the pre-eminent cover painter for Hayakawa’s SF Library line, which included many imported classics such as Edgar Rice Burroughs’ Tarzan.

While his actual contribution to Series 1 of Yamato ran a distant second to Miyatake’s, he did have the privilege of seeing it develop from the ground up, and talked about it with fellow artist Yoshikazu Asahina, who interviewed Mr. Katoh exclusively for this article.

When did you begin to draw?

What was your art education?

I went to a specialized school for graphic design from 19-21 years old.

How did you meet the other members of Studio Nue?

Kenichi Matsuzaki, with whom I later co-founded Studio Nue, had a circle [fan group] called SF Central Art. He put a notice about their doujinshi, Crystal, in SF Magazine, which had a corner devoted to doujinshi at the time. When I became aware of the book, it lead to participating in monthly meetings.

I met Mr. Matsuzaki in a meeting, and later I met Haruka Takachiho [writer] and Kazutake Miyatake [artist] and we became friends. Together we established a company called Crystal Art Studio in 1972 to go pro. It later became Studio Nue in 1974.

How did you become involved with Yamato?

Kenichi Matsuzaki took the opportunity to participate in the early design planning, and then it was decided that Studio Nue as a whole would work on design for Yamato. Kazutaka Miyatake was the main designer, and I helped him.

What was your first job on Yamato?

If I remember correctly, it was the interior of the Mars base.

What was your area of expertise?

I never had a special charge, but the main thing I designed was the rear of Yamato and the interior of the third bridge.

What was the typical process for a design from start to finish?

Usually when the script was done, we started immediately on mecha and settings that appeared in the episode. It was necessary for this to be done before the next phase, which was drawing the storyboard.

What was your impression of Yamato when you first saw it on TV?

I was surprised by the motion of detailed mecha, which had not been seen on TV before then. Previously, mecha design for mainstream TV anime was very simplistic, and complicated designs were usually ignored, so I was impressed by what appeared on the screen in Yamato.

Was there a ship or mecha in Yamato that was entirely your design?

The Gamilas tank was my design. Also, the space boat that carried materials around in scenes where Yamato was being repaired.

(Editor’s note: Katoh’s design sheet for the space boat bears the distinction of never having been published in any of the countless Yamato art books. He speculates that this is because animators made last-minute changes to the design, rendering his draft obsolete.) 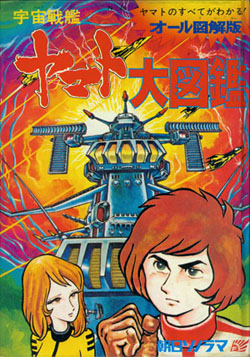 Katoh expanded on his experience in a brief article that appeared in Yamato Fact File magazine #30:

“In 1973 when I was engaged in production on Yamato, the Studio Nue staff arranged desks in a room in a leased condominium so three of us could work together. Mr. Miyatake’s desk was next to mine. I watched as he fixed Yamato‘s proportions from start to finish according to Leiji Matsumoto’s instructions.”

“I worked on many images with Mr. Miyatake. When I applied color to a draft he finished in pen, parts we couldn’t adequately express in linework were described in written instructions from him.”

“Mr. Miyatake was in charge of model sheets for the exterior of Yamato, so I did interiors and had to consider the shape for internal consistency. For example, the frame of the portholes on the bridge are not simple shapes, they’re bent at the middle.”

“Because I finished the model sheet of the first bridge that Mr. Matsumoto had painstakingly prepared, it is branded into my brain. Similarly, I had to be particular about how the small elevator shaft that links the captain’s room to the first bridge bulges out of the side of the bridge.”

Katoh’s involvement with Yamato was only fleeting after Series 1, but he would occasionally cross paths with it over the span of his active career. During the production of the series, he contributed illustrations to one of the most important single volumes in Yamato‘s long publishing history, an early artbook (shown at right) done entirely by Studio Nue.

See it from cover to cover with a partial text translation here.

One particular piece from that book, which depicted Yamato rising out of the Earth, became the basis for one of the saga’s most enduring images, a Katoh painting which first appeared on posters for the 1977 feature film. It steps away from the standard model sheets used by animators, but its appeal as a sleek, stylish alternative has continued to earn it attention from other artists.

Though that painting almost certainly had some input from Kazutaka Miyatake, it is known today as the “Katoh Yamato” and was heavily referenced in the limited-edition 2008 1/700 model kit from Bandai. It also had a strong influence on the ship’s redesign for the 2010 live-action movie.

It wasn’t the last time Katoh painted the ship, either. He was commissioned to create a new box art image for Bandai’s giant 1/350 model kit in 2007 (below left) and he produced another image for Yamato Fact File‘s 30th issue in 2010 (below right). This latest painting, which was derived from Series 3, strongly demonstrates Katoh’s evolution as a digital artist, and brings us back to his interview with Mr. Asahina.

What is your philosophy of mecha design?

My basic thinking for mecha design is “logic.” Rather than just a collection of details, a design has to be based on “function.”

What were your major works after Yamato?

Spaceship design for The Legend of Galactic Heroes.

Was there an anime (other than Yamato) that greatly impressed you?

Girl of the Alps Heidi, 3,000 Miles to Mother, and Future Boy Conan.

[Note: these were all TV series directed by Hayao Miyazaki prior to the founding of Studio Ghibli.]

Do you prefer drawing or painting?

Have you adopted digital tools for creating art, or do you still prefer “analog?”

I use both, but my work has become mainly digital.

What are your most recent works?

Renewal illustrations for the paperback of Starship Troopers.

You read that correctly: Starship Troopers, the seminal “hard SF” novel written by Robert A. Heinlein. Katoh’s long association with it is far better known in Japan than anything he did for Yamato, since it laid the foundation for an entire genre of anime.

This association began in 1975 when Katoh and Miyatake collaborated on illustrations for Starship Troopers that were published in Hayakawa’s SF Magazine. Together, they were the first to visualize the story’s famous Powered Suit with a precision and detail that had never been seen before. 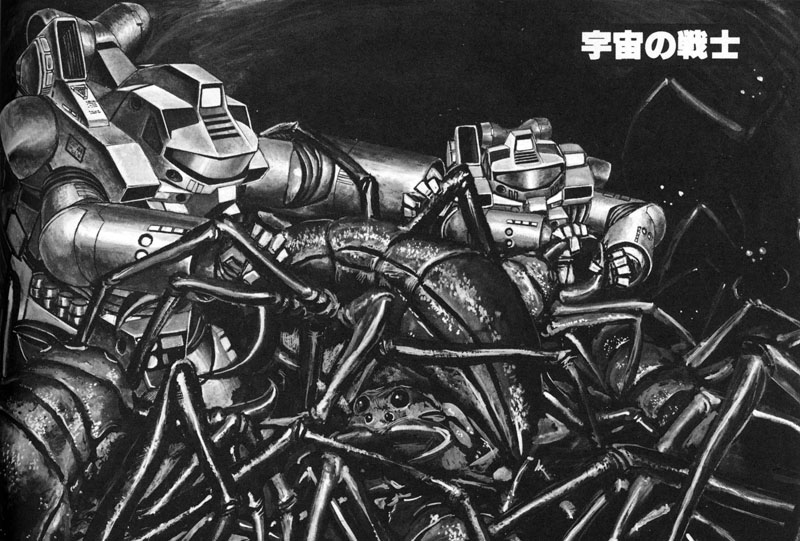 The art was an instant sensation, fully-realized and scientifically plausible mecha design that looked like it could actually function in the real world. To a generation of fans brought up on Mighty Atom, Tetsujin 28, and Mazinger Z, the Powered Suit was a complete reinvention of fantasy mecha. This shock wave rippled through the SF community and finally hit solid ground in 1979 with the premiere of Mobile Suit Gundam. Today, this is recognized as the dawn of “Real Robot Anime,” sprouted from the seed of Starship Troopers.

When Hayakawa published a new Japanese edition of the paperback (titled Soldiers of Space in Japan) the same year Gundam appeared, Katoh was the natural choice for the cover and interior illustrations. (See a gallery here.) The Powered Suit design became indelible at that point, refined only by Miyatake himself for the 1988 Starship Troopers anime video series, for which Katoh did package design.

One might think that Space Battleship Yamato and Starship Troopers would be enough for any one resume, but they still represent only a sliver of Katoh’s career. His name is also attached to two other well-known SF/fantasy properties as a result of his long association with Hayakawa Publishing: Legend of Galactic Heroes and Guin Saga.

Both began as popular and long-running novel series (written by Yoshiki Tanaka and Kaoru Kurimoto respectively) with Katoh cover paintings and interior illustrations. When each was transformed into anime, Katoh’s artistic influence played a major role. He was actually involved as a mecha designer on the first, and character design followed his lead on the second.

Besides novels, he paints for package art, posters, and advertising. In addition to acrylic and watercolor, he enthusiastically embraced CG techniques in the 1990s for a strong fusion of analog and digital. In 1992 he created a pioneering example of a three-dimensional CG character using Graphicsoft Shade and created a “virtual idol.” This attracted the attention of the media and developed into a character named Virtual Reiko used in advertising by Hitachi/Maxell. 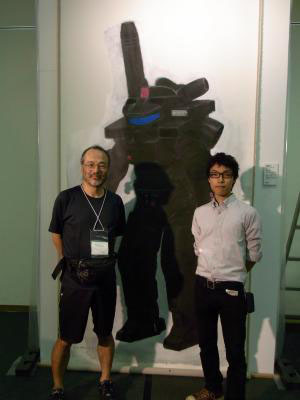 Finally, it should come as no surprise that Katoh’s Powered Suit is alive and well in the 21st Century. In 2001, he modeled it in CG for a planned action figure which was eventually realized as a 1/12 model kit from Wave.

The most recent chapter in this story was added in 2010 with the building of a 1/1 Powered Suit mockup for special exhibitions in Japan. See it being assembled on YouTube here.

Katoh’s contribution to this effort was to complement it with a 1/1 scale painting. He can be seen personally rendering it here.

Finally, click here for photos of Katoh with the mockup and its builder, Shuhei Torii.

In closing, no tribute to Mr. Katoh would be complete without a mention of his strong passion for bicycling, which by many counts equals his passion for art. For this we should be thankful; in resisting the temptation to chain himself to a sedentary career, he instead chose a lifestyle that will keep him healthy–and drawing–for years to come.

As of fall 2011, four of Katoh’s collections are available as ebooks from iTunes. They can be downloaded from these links:
Time & Space | Guin Saga Art Collection | Autograph book from Donburacon L | Skylark of Space Illustrations 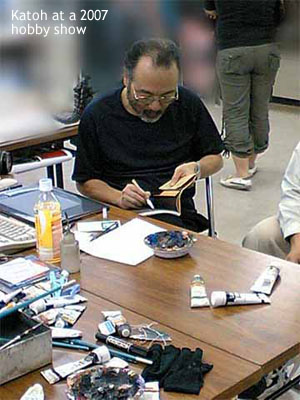 Do yourself a favor when you visit his site: at the very top of the page, above the English line of text, copy the first four kanji characters (Katoh’s name), paste them into a Google search field and add the word “images.” You’ll instantly find yourself with plenty to do. 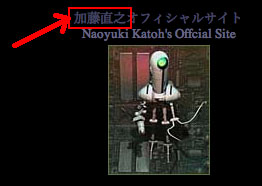