We Look Forward to the Yamato Drama!!

Cruel Scenes of Yamato are the Favorite!? 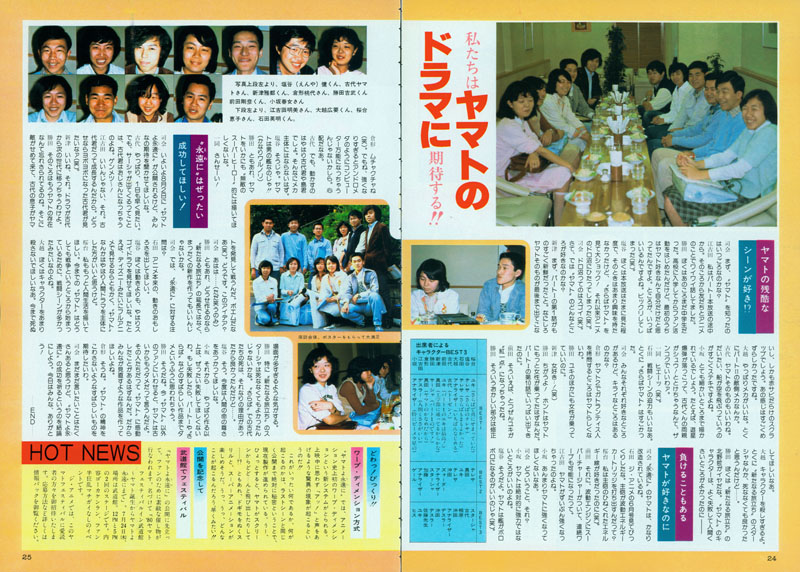 Host: When did you first see Yamato?

Ekoda: In the middle of Series 1. I talked a lot about anime with a friend at that time.

Katsuta: I was still a middle school student in those days. I started my fan activities after I entered high school. At first I thought I was the only one who thought about Yamato. However, there were many. I was surprised! (Laughs)

Shioya: I saw it on TV occasionally. I didn’t have much interest in it, but then I saw Farewell and it was a great shock! Since then, I have soaked myself in a bog of anime. (Laughs)

Host: What a great bog! (Laughs) Well, which Yamato do you like best?

Niitsu: First, the story of Series 1 was very fresh. Yamato was just scrap, covered in red rust, and might not emerge until the last minute. The feeling was very unusual.

Okoshi: Also, the mecha was very good. Especially on the enemy side.

Kodai: Yamato is good, too. It’s a great idea for a ship to fly in the sky.

Kosaka: It featured a lot of small details. For instance, the planet bomb dropping on Kodai’s parents–Shyoooo! And it melted them; such nice cruelty.

Ishida: The force of the battle scenes is good too, especially in Farewell.

Host: Everyone has a favorite thing, is there also something you hate?

Kurakata: The episode where the Gatlantis soldier is tortured in Series 2 doesn’t seem like Yamato.

Katsuta: I wish there were other women on board besides Yuki.

Katsuta: No! It would be more realistic if more women were on Yamato. They were gone after episode 10 of Series 1.

Maeda: By the way, I wasn’t expecting Yuki to become “the only woman in the group.”

Katsuta: It’s a strange part, I wish it was corrected.

Okoshi: Too many characters were killed. Especially, I don’t think Starsha should have died in The New Voyage.

Katsuta: I didn’t llike Tetsu Kitano in The New Voyage, but I thought it was a good point that characters in Yamato made mistakes and seemed more human. 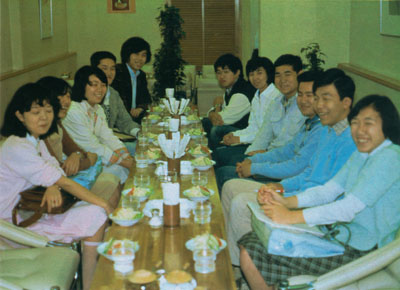 Host: Yamato is considerably remodeled in Be Forever.

Ishida: I was surprised to see that in the June issue of The Anime. Do the main guns fire Wave-Motion Energy cartridges?

Sakuradai: But I liked the twisting energy beams of the guns! (Laughs)

Maeda: And the supercharger on the Wave Engine enables it to make continuous warps.

Ekoda: Yamato will be considerably stronger.

Kosaka: I don’t want Yamato to be much stronger.

Host: Why do you say that?

Kosaka: It’s better for Yamato to have some weaknesses.

Shioya: That’s right. Yamato ships get covered all over with damage, that’s the cool point. (Laughs)

Kurakata: It’s nonsense. (Laughs) But I’m afraid it would become like Andromeda with an almighty, all-purpose computer. That worries me.

Kodai: But Kodai and Shima are still in charge. It cannot be mechanized too much.

We Definitely Want Be Forever Yamato to Succeed!

Host: Be Forever will premiere on August 2, so I’d like to hear about everyone’s expectations.

Kodai: I want to see it on the first day. But the appearance of Sasha means my Kodai would be an old man. Disappointing! Disappointing!

Ekoda: That wouldn’t be good. Kodai has to grow older, but nobody wants to see him as a doddering old man, after all. (Laughs)

Niitsu: It is good to move Kodai’s story into the next generation.

Katsuta: In that time, Yamato could be long forgotten. An enemy could attack, and the son of Kodai rediscovers Yamato and fights back. It would be poetic. (Laughs) What do you think of my idea?

Katsuta: Anyway, it wouldn’t be just an extension of The New Voyage. It could be a completely new work.

Host: Then, what about Be Forever Yamato?

Ishida: I’d like it to demonstrate the appeal of the original anime movement.

Shiotani: More than that, I want it to present a great drama. For example, compared with full animation like Disney, I think Yamato is better since it’s mainly a human drama.

Sakuradai: I want it to show more humanity. I think previous Yamato series inevitably had too many battle scenes because they were based on a war situation from the beginning.

Okoshi: I don’t want them to kill off too many characters. There have been too many scenes of people dying so far.

Katsuta: Especially Starsha in The New Voyage; I don’t think it was good that she had to die. At least Kodai’s death in Farewell was good because there was a reason for it.

Shiotani: Yes. I want them to honor the preciousness of human life this time.

Kosaka: On top of all that, I absolutely do not want it to fail. If it does, it will be no use talking about how great Series 1 or Farewell were.

Katsuta: Yeah. When you talk to people now who aren’t Yamato fans, they say it’s too old. But everyone should be impressed by Yamato, so I want it to be a movie that everyone sees.

Kurakata: Right. I want it to be a great movie that upholds the spirit of Yamato.

Host: I think there’s a lot more to say, but let’s conclude by praying for the success of Be Forever. Thank you for today, everyone! 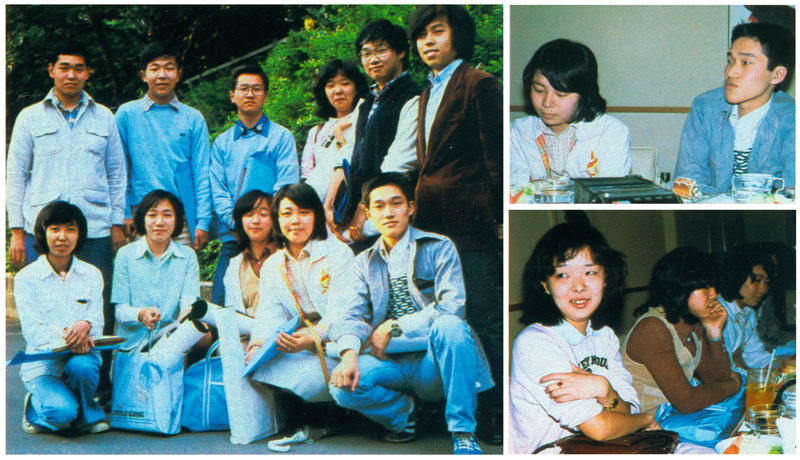 In Be Forever Yamato, a new system in animation is adopted for the first time, called “Warp Dimension.” It will be an amazing phenomenon that will make you gasp! What on Earth will happen? Production advances in top secret on this as well as the final scene. Is it possible that Yamato could jump off the screen…? Anyway, it seems certain that everyone will enjoy the excitement and thrills of super animation. What will happen? We’ll all see soon!

Premiere to be Celebrated at Festival in Nippon Budokan

Prior to the premiere of Be Forever Yamato, a great performance for fans will be held named ’80 Yamato Festival in Nippon Budokan: From Birth to Be Forever Yamato. It will take place on July 24th (Thursday) at two times on stage: 12pm and 5pm. It is a luxurious event, certain to make fans frantic. Readers of The Anime are invited to attend the Yamato Festival. See the information for application details. [Followed by address data.]