The Theme of Be Forever Yamato is the Beauty of Life 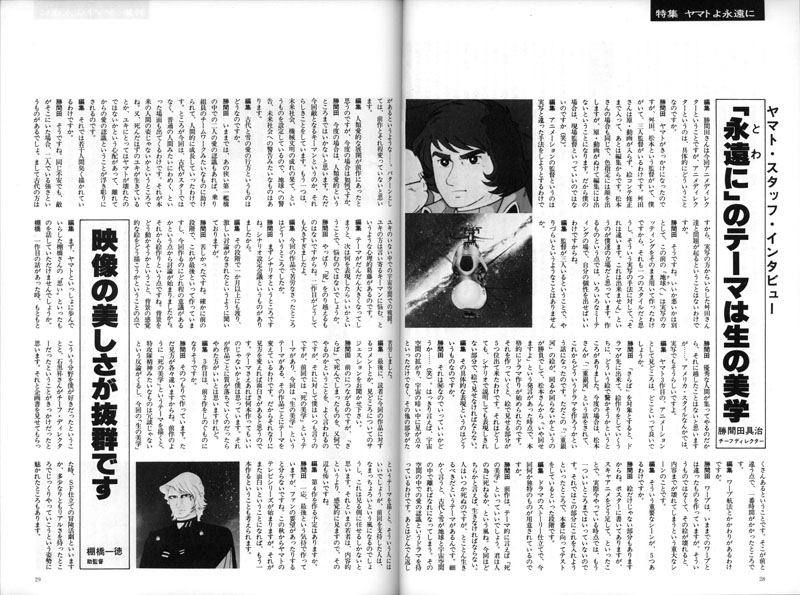 Katsumata: When Yamato became an opportunity for me, Mr. Toshio Masuda and Leiji Matsumoto were already directors, so now there are three of us. Mr. Masuda is not involved with the animation, so he supervised the storyboard and will continue with the editing. In the case of Mr. Matsumoto, he worked on everything up to color appointment, but will not participate in the editing. So in my case, you could refer to me as the foreman. (Laughs)

Interviewer: Since directing animation is different from the methods of directing live-action, is that why Toshio Masuda is not involved?

Katsumata: Yes. The recent [anime movie] Toward the Terra used the methods of live-action moviemaking. It’s not a matter of good or bad, I think it’s just another style. Our job is to assess proposals to adopt live-action methods and say, “wrong, that’s not possible” when necessary. With the kind of thing we make, we can show our personalities in various meetings.

[Translator’s note: Toward the Terra (1980) was produced by Hideo Onchi, who utilized extended-length scenes, a distinctive feature of Japanese live-action movies. As a result, the two-hour film had only 700 shots. Owing to the risk of expensive and time-consuming retakes, this is a very rare method for animation.]

Interviewer: It seems that having three directors would make for more difficulty.

Katsumata: I think it’s better to work in cooperation because we have a staff with excellent talents. From what I hear, that’s the American style, the method they use to make live-action films.

Interviewer: What would you say are the highlights of the animation in Yamato Part 3?

Katsumata: Talking about Farewell to Yamato, we had the story first and then I thought about how to surprise viewers with our art. At that time, Mr. Matsumoto talked about an idea for a “double galaxy,” and it was decided to use it in a future story. But the determinant was whether or not we could actually create artwork of a “double galaxy” or not. But when Mr. Matsumoto said, “no problem, we can do it,” we began the story-making in earnest. While it was being developed, we chose five scenes that would have to rely on artwork. With a part that cannot be explained in the script, you have to express it with a picture.

Katsumata: I’m not sure I should say it, because it’s a secret…(laughs) I’ll put it this way: in a vast spread of outer space there are lots of points for stars in the darkness, but many other things exist in addition to that. Those are the things that require the most time, those that differ from the norm.

Katsumata: We made the warp scene different from previous ones, but that’s not what I’m talking about. I mean, it’s a cricitally important scene that will ruin the movie if we fail in the art. 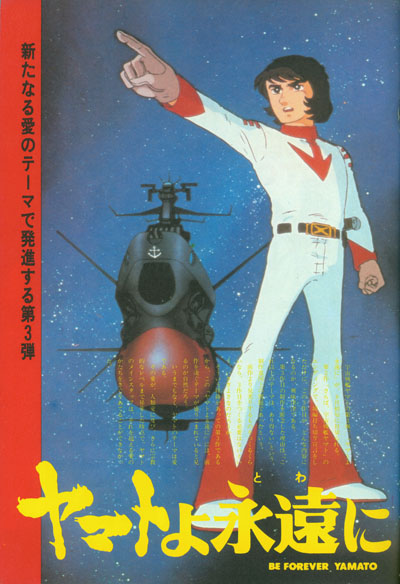 Interviewer: Are there five such important scenes?

Katsumata: It isn’t just a matter of artwork. It is promoted on the [movie] poster, but we are struggling with how to use Scanimation. Actually, we can’t use it effectively at the moment. As we work toward the premiere, we’re in the testing stage for the part of the movie where this will go.

Interviewer: What are some of the unique things about the story?

Katsumata: In talking about the previous work [Farewell to Yamato], you could say the theme was “the beauty of death.” Whether or not you could die for another person. This time, it’s about the necessity to live. There is the theme that everyone will die someday, so you should make the most of your life. To be more precise, Kodai and Yuki are separated; one is in space and the other is left on Earth, so the drama is about the recognition of love in space. After that, there is a surprise ending. I don’t think it’s a major change from the pattern of the previous works.

Interviewer: The previous work was about the love of all mankind; is that the case this time?

Katsumata: This time, it doesn’t go to that level. Instead it focuses on the enemy, Kiman. Then there is an encounter with a remote machine civilization which seems to set up a warning to Earth, a warning to future society.

Katsumata: What is the fate of the love between Kodai and Yuki?

Katsumata: Up until now, there was the recognition of love between two people working together on Yamato‘s bridge, and while being helped along by the teamwork of the crew, they grew to maturity. But this time Kodai isn’t a super-heroic character, so there is a scene where he cries out like an ordinary man. I’d like to say it’s the true aspect of a natural human being. He doesn’t know if Yuki is alive or dead, and she doesn’t know if Yamato is destroyed, and how this affects their love is a real highlight.

Interviewer: So he is depicted as an ordinary person.

Katsumata: Yes. Even when there is an enemy to cause anxiety, there is a strength between two people. Kodai is in the middle of a battle in space without Yuki, and Yuki faces a psychological conflict because Kiman makes advances toward her.

Interviewer: The scale of the theme gets bigger and bigger. I guess you may be troubled by what the theme will be next time.

Katsumata: Yes, nothing can surpass “death.” The second movie was too grand.

Interviewer: What areas of this work gave you a hard time?

Katsumata: First of all, it was the script. There was a major script conference.

Interviewer: We heard that there was over a month of intense discussion.

Katsumata: It was difficult. In fact, when we made the previous movie we said it would be the last time. Actually, our discussion started from the topic of whether or not there was any purpose to making this movie. After that came the design stage. How could we move the background…It was difficult in terms of how to depict the background images.

Interviewer: Finally, please comment on this work for the readers; please give your suggestion with regard to the highlights.

Katsumata: In relation to what I said before, people often ask me why we’re doing it again when they died in Farewell. I always answer this way: last time there was a theme called “the beauty of death” and this time the theme is “the beauty of life.” The theme changes with every work. I think it’s interesting if the viewpoint changes. You can make them with many different themes, though I think it should stop if the quality declines.

Interviewer: Is the third movie likely to surpass the previous two?

Katsumata: We’re making it with that intention. But each one has a different viewpoint. When I talk about the theme of “the beauty of death” in the previous work, some would argue that the reality of the Special Attack Corps [Kamikazes] was not a joke, so it will be good for such a person when I talk about “the beauty of life” this time. People who like the previous movie may think this one will become unmanly, so I think there is no other way but to trust it to the viewer. And I’m concerned about the reaction of young people because they judge surface rather than substance.

Interviewer: Is there a plan to make a Part 4?

Katsumata: I’m tentatively making this one with the feeling that it will be the last, but I don’t know yet what are the demands of the fans. A new Yamato TV series will start in the fall, and if that does well it is conceivable that we could make another one.